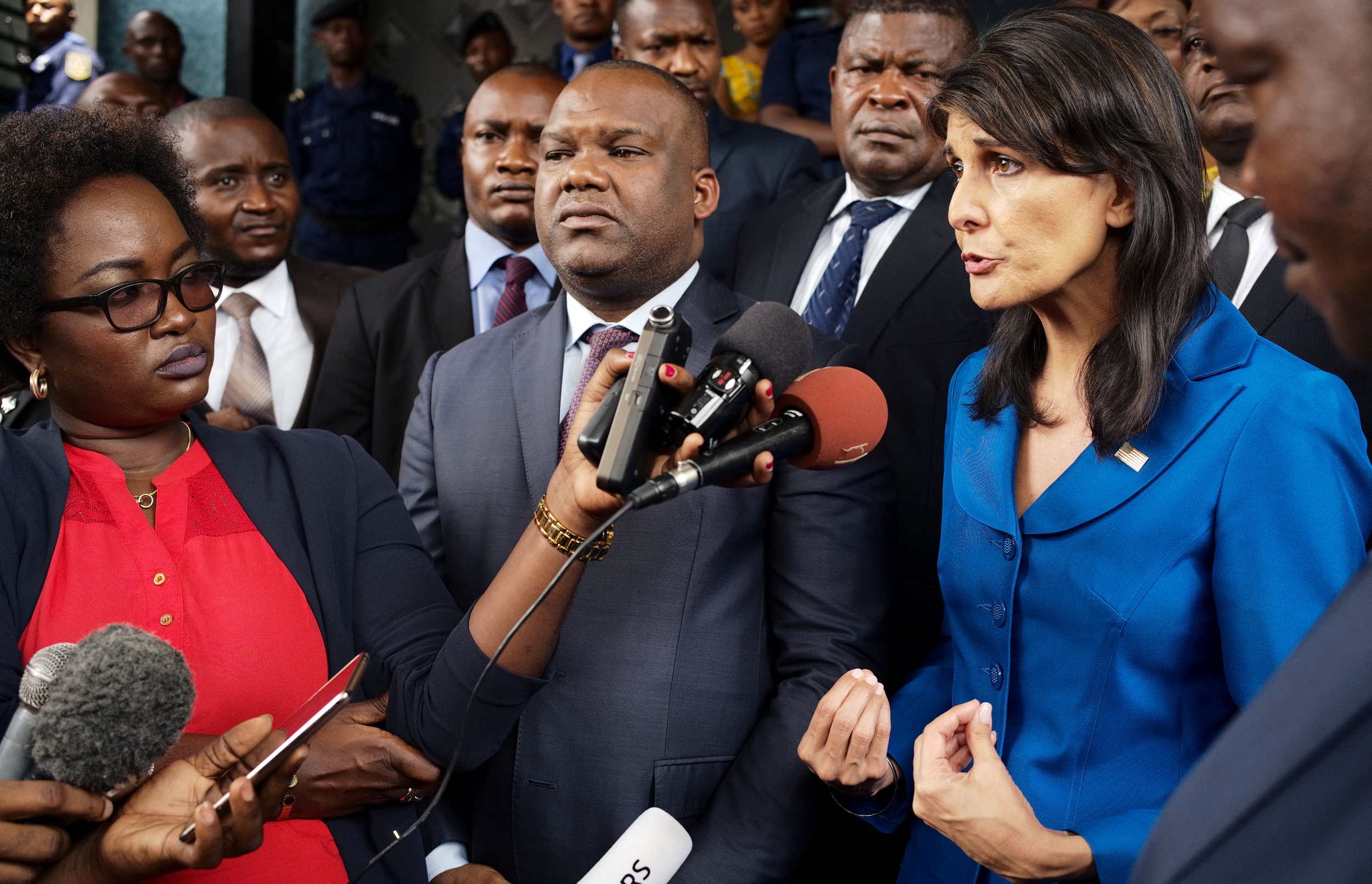 US Ambassador to the United Nations Nikki Haley and President of Congo's electoral commission (CENI) Corneille Nangaa (C) addresses the media at the CENI headquarters in Gombe, Kinshasa, Democratic Republic of Congo, October 27, 2017.

KINSHASA - Democratic Republic of Congo (DRC) must hold a long-delayed election to replace President Joseph Kabila by the end of next year or the vote will lose international support, the US ambassador to the United Nations said on Friday.

Repeated delays to the poll, originally scheduled for late 2016, have led to unrest and raised fears the central African nation could slip back into the kind of conflicts that killed millions around the turn of the century.

US envoy Nikki Haley met with Kabila for 90 minutes on Friday. She is the most senior member of President Donald Trump&39;s administration to visit the country.

"It was a firm, candid conversation," Haley told a small group of reporters, adding she had "made very clear that the United States wanted to see elections in the Democratic Republic of Congo in 2018 and we wouldn&39;t accept elections any later".

Haley, who earlier on Friday met with the Congolese electoral commission (CENI), political opposition and Catholic bishops, did not elaborate on what action the United States could take.

After meeting with CENI, she told reporters she had passed on a message that "these elections must take place in 2018 or there will be no support for the electoral process".

"Every day we don&39;t have elections in this country someone dies," she said.

The electoral commission had said earlier this month that the vote to replace Kabila could not take place until April 2019 at the earliest, leading the opposition to warn that the population would "take matters into its own hands".

Dozens died in protests against Kabila&39;s refusal to step down at the end of his constitutional mandate last December. The resulting political crisis has also contributed to rising militia violence in Congo&39;s east and centre.

Kabila, who has ruled Congo since his father&39;s assassination in 2001, said the election delays are due to challenges registering millions of voters.

However, his opponents accuse him of using the delay to manoeuvre to remove term limits that prevent him from standing for re-election, as presidents in neighbouring Rwanda and Congo have done. He denies those charges.

Congo government spokesman Lambert Mende said the government hoped to see the election as soon as possible but that it was up to the electoral commission to set the date.

"It&39;s not up to the government, nor to Ms Haley to organise the elections," Mende said. "I don&39;t think that we can be subjected to these kinds of diktats."

International donors have said they are prepared to provide significant funding to elections but are waiting for a realistic calendar from CENI.

So far, they have contributed only six percent of the $123-million (R1.73-billion) that the United Nations is expecting, the head of the UN peacekeeping mission in Congo said earlier this month.