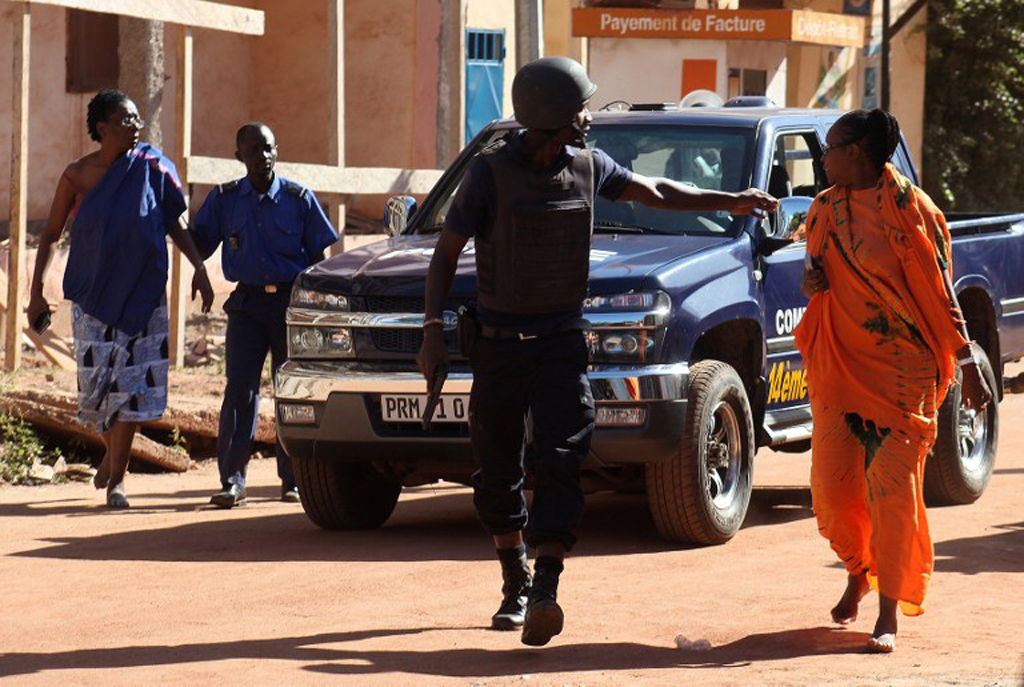 BAMAKO - US special forces were helping in the effort to rescue hostages at a luxury hotel in the Malian capital on Friday, a Pentagon spokeswoman said.

"US forces have helped move civilians to secured locations, as Malian forces clear the hotel of hostile gunmen."

Meanwhile, Seven Algerians who had been trapped in a hotel in Mali&39;s capital Bamako when it was seized by gunmen Friday were freed when troops stormed it, Algeria&39;s foreign minister said.

They were a six-member official Algerian delegation, mostly diplomats, and a private citizen who works for a French company, Ramtane Lamamra said, quoted by the APS news agency.

It was not immediately clear if more Algerians were in the hotel when gunmen went on a rampage Friday morning, taking 170 guests and staff hostage.

Gunmen stormed a luxury hotel in Mali on Friday, seizing 170 guests and staff including many foreigners in a hail of automatic gunfire, exactly a week after the deadly jihadist rampage in Paris.

Dozens of hostages managed to escape the early morning raid, but 138 people were trapped in the besieged Radisson Blu hotel in the Malian capital Bamako and the security ministry said at least three people had been killed.

There was no immediate confirmation of any link to the devastating Paris attacks last Friday that left 130 people dead, but Mali has been at the centre of French military operations against Islamists in north Africa.

The country&39;s north fell under the control of Tuareg rebels and jihadist groups linked to Al-Qaeda in mid-2012 before they were beaten back by by a French-led operation in early 2013.

As the drama in Bamako was unfolding, EU ministers agreed at an emergency meeting in Brussels to tighten border controls after the Paris massacre which was orchestrated by a jihadist who had travelled between Syria and France.

Prosecutors in Paris also confirmed that three people had died at a house in a north Paris suburb used as a hideout by suspected attacks ringleader Abdelhamid Abaaoud, including him and his female cousin.

Abaaoud, a Belgian of Moroccan origin, and cousin Hasna Aitboulahcen were killed in an assault by anti-terror police on Wednesday. The identity of the third body has not been disclosed.

In Bamako, Malian special forces and police backed by members of the UN&39;s MINUSMA peacekeeping force in Mali and French troops were seeking to end the siege where 170 people were initially seized.

Gunmen entered the 190-room hotel compound at around 0700 GMT in a car with diplomatic plates and automatic gunfire was heard from outside, security sources said.

The hotel&39;s owner, the Rezidor Hotel Group, said 138 people were still inside at around 1400 GMT, with employees of the French and Turkish national airlines as well as Indians and Chinese among known to be among those staying there.

Three hostages were killed, a spokesman for the security ministry in Mali said, but said their identities were being verified.

"Our special forces have freed hostages and 30 others were able to escape on their own," Security Minister Salif Traore told AFP.

President Ibrahim Boubacar Keita, who is in Chad for a summit of leaders from the Sahel region, is cutting his trip short and flying home, the presidency told AFP.

Around 40 officers from an elite French unit of paramilitary police specialised in hostage situations also left for Mali to assist wih the operation.

The US embassy in Mali advised American citizens in the country to shelter where they were, contact their families and monitor local media.

The Radisson attack follows a siege in August lasting almost 24 hours at a hotel in the central town of Sevare in which five UN workers were killed, along with four soldiers and four attackers.

Five people, including a French citizen and a Belgian, were also killed in an attack at a restaurant in Bamako in March, in the first such incident in the capital.

Islamist groups have continued to wage attacks in Mali despite a June peace deal between former Tuareg rebels in the country&39;s north and rival pro-government armed groups.

In a recording authenticated by Malian authorities this week, a jihadist leader in Mali denounced the peace deal and called for further attacks against France, which is helping national forces fight extremists.

- Tighter border controls -In Europe, the 28-member EU bloc has agreed to immediately tighten checks on all travellers, including European nationals, at the external borders of the passport-free Schengen area following the Paris attacks.

French Interior Minister Bernard Cazeneuve said that he EU will consider ways to change the Schengen system by the end of year to allow "systematic" controls of EU citizens at the zone&39;s external borders.

The European Commission also called for the establishment of an EU-wide intelligence agency in the wake of the Paris massacre, the deadliest on European soil since the Madrid train attacks that killed about 200 people in 2004..

The Schengen zone -- which allows Europeans to travel without border controls -- has come under scrutiny following revelations that some of the Paris attackers came from Belgium and that Abaaoud appeats to have returned from fighting with IS in Syria to orchestrate the atacks.

Prosecutors also revealed Friday that Abaaoud was caught on CCTV at a Metro station in Paris less than an hour after gunmen began spraying cafes and restaurants with gunfire in the trendy Canal St Martin area.

Prime Minister Manuel Valls admitted Thursday that French authorities did not know how he had managed to get into the country, when he was under an international arrest warrant.

Abaaoud&39;s links to Syria and the discovery of a Syrian passport near the dead body of one of the gunmen have also stoked concerns that jihadists could be posing as refugees as a cover for plotting attacks.

Abaaoud himself was the subject of an arrest warrant issued by Belgium, where in July he was sentenced in absentia to 20 years in prison for recruiting jihadists for Syria.

He was involved in four attack plots foiled in France this year, Cazeneuve has said. Investigators are also probing links to an attempted attack on a high-speed train in August that was thwarted when passengers overpowered the gunman.

In the US, the Republican-dominated Congress on Thursday voted to ban Syrian and Iraqi refugees from entering the United States until tougher screening measures are in place.

And in Russia, reeling after a Russian airliner was downed in Egypt killing 224 people on board in another attack claimed by IS, both chambers of parliament will hold an extraordinary meeting on tackling terrorism on Friday.