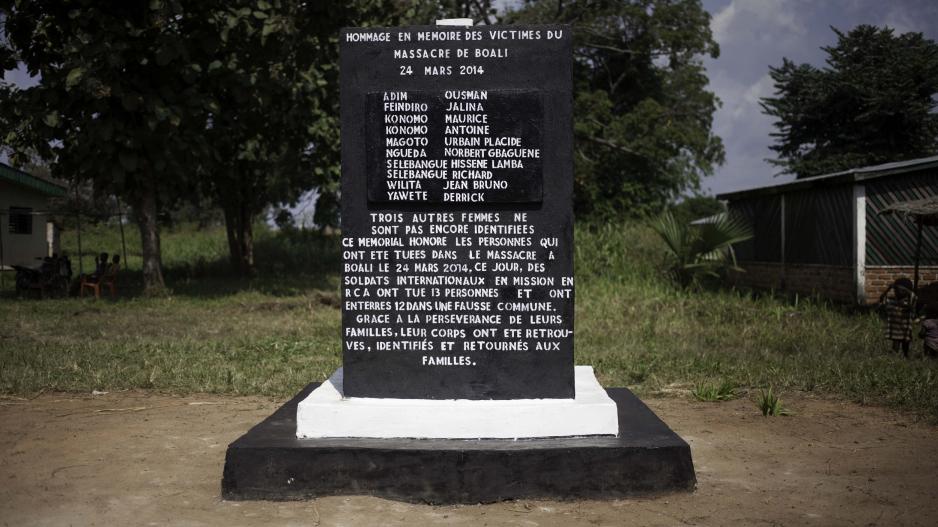 The monument for the victims of the Boali massacre.

BOALI - A stunned crowd looks on as crates bearing macabre labels such as "mixed bones" and "Body 1" are unloaded from a UN truck in Boali, victims of a massacre by peacekeepers from Congo.

"This is like a knife in our hearts," breathes Robert Konomo, who lost his two younger brothers in one of the greatest blunders by peacekeeping soldiers in Africa.

Last week, the United Nations returned the remains of 13 women and men to their families in Boali, a town some 100 kilometres north of Central African Republic&39;s capital Bangui.

But more than three years later, how the slaughter unfolded remains unclear, and justice remains an empty word.

A sober black monument carved with the victims&39; names has been put up at the local cemetery, where relatives gathered last Tuesday for a ceremony where the bones were handed over, to be laid in their final resting place.

About a dozen civilians were reported missing in the Boali region in March 2014 following a clash between, on one side, "anti-balaka" militiamen mainly drawn from Christian communities, and on the other, Congolese soldiers serving in MISCA -- a multinational African force that had been deployed to the strife-torn country.

MISCA handed over to the UN mission MINUSCA in September 2014.

But by then, Human Rights Watch was already investigating the African-led force and accusing Congolese troops of bloody reprisals after one of their number was killed by the anti-balaka.

"Peacekeeping soldiers are there to protect the civilian population, not to make them suffer new atrocities," HRW&39;s emergencies director, Peter Bouckaert, said at the time.

Searches for the bodies of those who disappeared came up with nothing until 2016, when a mass grave was unearthed close to a onetime MISCA base in Boali.

The remains of 12 men and women were exhumed and once again, HRW charged that Congolese peacekeepers were to blame for their deaths.

"I&39;m happy, but I&39;m not satisfied," said Konomo, dressed in his finest robes to honour the reconstituted skeletons of his brothers laid out on rough-hewn wooden tables ahead of burial.

"I hope that justice will be done," he added firmly.

Delivering justice is the goal of a medical and legal investigation into the incident since the Republic of Congo set up a probe under international pressure.

A Special Criminal Court established to try crimes committed in the troubled CAR since 2003 -- when onetime military chief Francois Bozize seized power in a coup -- has placed Bouali prosecutor Roger Poussinga in charge of the legal inquiry.

A specialist team financed by the United States was formed to identify and reassemble the bones.

Three-quarters of the researchers were students in forensic medicine at Columbia University in New York and the others were doctors of forensic anthropology from Argentina.

"It&39;s the first time that a (foreign) forensic assessment has been carried out" in CAR, said a science officer of the UN&39;s police (UNPOL) delegated to provide technical assistance to the experts.

The scientists took DNA from bones to be sequenced and cross-checked against presumed relatives, one of them told AFP, asking to remain anonymous. "This helps us track down the families."

Justice Minister Flavien Mbata unveiled the memorial plaque, revealing an inscription that reflected the bitterness of relatives of the victims.

"International soldiers on a mission in the CAR killed 13 people and buried 12 of them in a mass grave. Thanks to the perseverance of their families, the bodies were found, identified and returned," the plaque reads.

Some people wept when the skeletons of their kin were carried past in rough-hewn wooden boxes.

Eleven families attended the ceremony, in some cases travelling many kilometres.

Some people used their mobile phones to take photos of the imposing monument carved with the names of the victims.

Though relatives were keen on a search for the truth of the massacre, the forensic work left some sceptical and unhappy.

"It&39;s not our way of doing things, for bodies to be handled" in this way, said one young man.

"What they want most of all is for justice to be done."