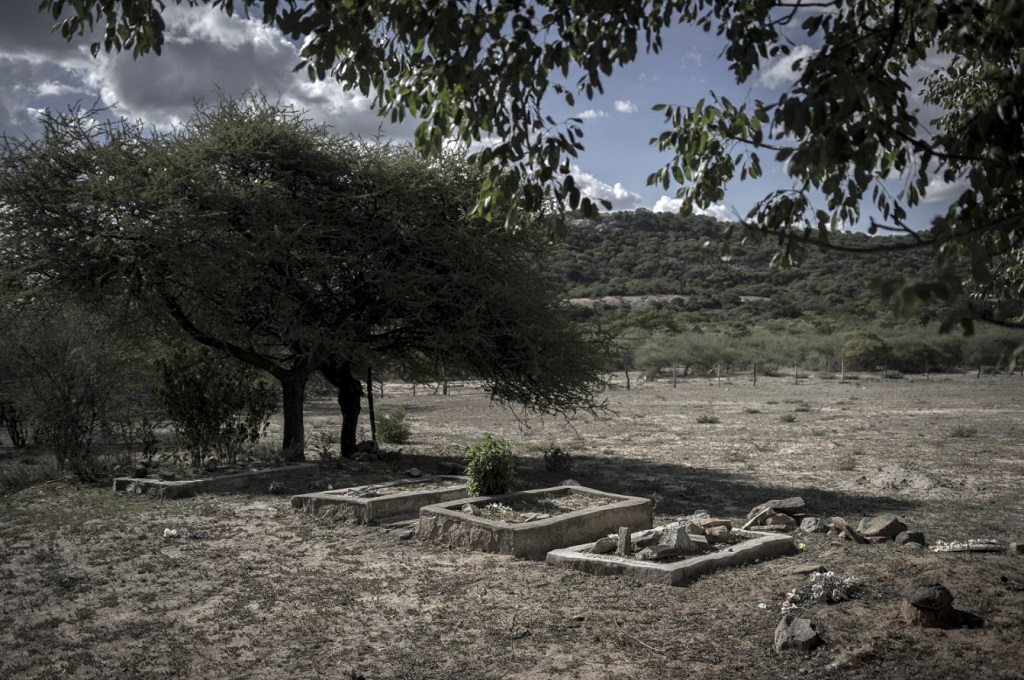 Graves are seen on December 20, 2017 at a monument built at the site of disused Bhalagwe barracks in Matabeleland South province, Zimbabwe.

MAHETSHE - To ward off evil spirits, Jochonia Moyo picks wild herbs as he returns to Bhalagwe detention camp, the site of unimaginable brutality during a series of massacres more than 30 years ago that still haunts Zimbabwe today.

The massacres occurred in the early 1980s but for decades were discussed only in hushed voices.

Now, the end of Mugabe&39;s iron-fisted rule has revived calls for justice - and renewed accusations that the new president, Emmerson Mnangagwa, played a key role in the bloodshed.

"I remember perfectly the day, 8 March 1984, when they arrested me and brought me to Bhalagwe," Moyo, now in his 60s, told AFP as he surveyed the scant remains of the camp.

"While we slept, the soldiers urinated on us and new detainees were even forced to lick women&39;s menstrual blood," he said.

READ: We will let Mugabes live in peace: Mnangagwa

Moyo had been targeted for attending meetings of ZAPU, a rival political party that Mugabe was determined to crush as he strengthened his Zanu party&39;s grip on power.

Troops from the notorious Fifth Brigade, trained by North Korean advisers, committed mass atrocities during the crackdown on a supposed rebellion in southwestern Matabeleland province.

Zapu supporters, plus many other villagers, women and children, were rounded up, tortured and killed in the massacres, called "Gukurahundi" which loosely means "the early rain which washes away the chaff".

A chance for truth?

Amnesty International has backed the estimated death toll of 20,000 compiled following an investigation by the rights group the Catholic Commission for Justice and Peace in Zimbabwe.

Amnesty says it first heard reports of killings in 1982 and has described them as "bloody and brutal".

Many Zimbabweans hope that Mugabe&39;s shock November ousting after 37 years could be a chance to confront those responsible for the bloodbath.

But many also say that Mnangagwa, who was one of Mugabe&39;s closest long-time allies, was guilty of the worst crimes under the old regime.

At the time, Mnangagwa was minister of state security, leading the Central Intelligence Organisation (CIO) spy agency, which methodically gathered names and addresses of those selected for torture or death.

"He was in charge of the CIO that conducted the most targeted aspect of the massacres, such as assassinations of key political leaders," Stuart Doran, author of a new book covering the killings, told AFP.

Mnangagwa denies any culpability and has again declined to apologise since coming to power.

Doran, who describes Mnangagwa as one of the "architects" of the killings, also points to Perence Shiri, a former general who currently serves as agriculture minister.

Shiri was the commander of the feared Fifth Brigade and "oversaw the indiscriminate massacre of civilians," said Doran, whose 2017 book "Kingdom, Power, Glory" unearthed new evidence about the carnage.

"It was the darkest period in Zimbabwe&39;s post-colonial history," he said.

READ: Mnangagwa and the military may mean more bad news for Zimbabwe

For Zimbabweans who campaign for justice over Gukurahundi, the new government is tainted with the deaths of thousands.

"The perpetrators are still in leadership, they are in authority," said Mbuso Fuzwayo, head of the Ibhetshu Likazulu pressure group.

Shocking eyewitness testimonies emerged only slowly under Mugabe&39;s authoritarian rule, with survivors like Charles Thomas reluctant to share memories that still give them nightmares.

"There was a woman who was nine months into her pregnancy. The Fifth Brigade accused her of carrying a dissident&39;s baby," he said.

"They ripped her belly open using bayonets ...  they sliced the foetus and roasted the flesh while the family was forced to sing and dance around the fire. They forced the family to eat the flesh."

The family refused and two of the grandparents were shot, he said.

Monica Ndlovu, who was in her 20s at the time of the massacres, says she lost her innocence as well as her father in the death camps.

"These were men carrying machine guns, they could do as they pleased. They would take turns having sex with us.

"How do you escape from that? All I can say is that the Fifth Brigade was sent from hell by the devil himself."

The end of Mugabe&39;s rule has encouraged Gukurahundi activists to be more vocal.

At the end of last year, families held an unprecedented protest in Bulawayo city in Matabeleland, demanding their loved ones be exhumed from mass graves and given proper burials.

"We will never beg Mnangagwa to apologise because he knows what he did. He was there. His hands are dripping with blood," said one marcher, Patricia Tshabalala.

At a public appearance by Mnangagwa in the city, protesters held up placards denouncing the massacres.

Eight protesters were arrested but released without charge, with local media reporting they were beaten while in custody.

Mugabe, now aged 93, has previously dismissed the massacres as "a moment of madness".

Mnangagwa this week brushed off suggestions that he should apologise and questioned the 20,000 death toll estimate, though he said he had already set up a commission to address the allegations.

"What has happened has happened," he said at the World Economic Forum in Davos, admitting it was "a bad patch" in Zimbabwe&39;s history.

The government declined to comment on allegations against Shiri.

No rush to justice

Mnangagwa, who took over after Mugabe was forced to resign by the military and lawmakers, has vowed to revive Zimbabwe, saying that foreign investment is key to creating jobs.

For Bulawayo-based opposition politician David Coltart, it is an opportunity to push for justice.

"If Mnangagwa and Shiri are to gain credibility in the international community, they have to acknowledge and apologise for the role that they played," he said.

Doran, though, is unconvinced that the victims will have an early chance of redress.

"The perpetrators remain in control as they have since 1980," he said. "I think Gukurahundi will remain a taboo subject in Zimbabwe for the foreseeable future."