Villagers in Zimbabwe skip meals to save scant food 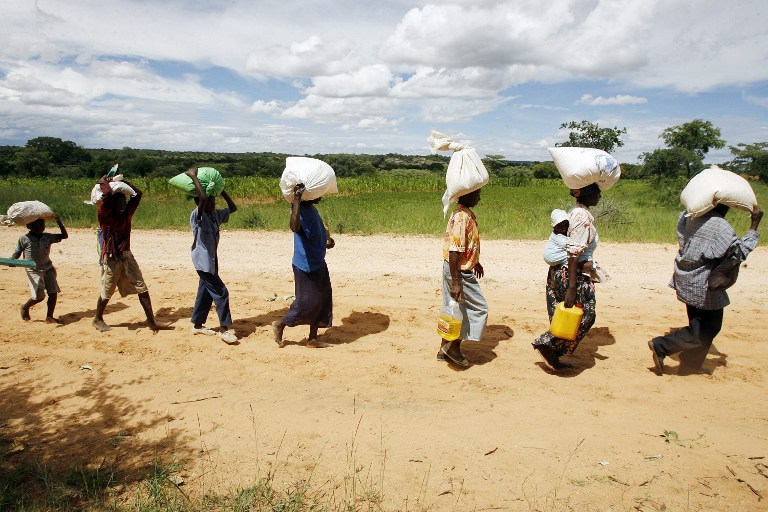 File: An estimated 27.4 million people out of Zimbabwe's combined population of 292 million will be depending on food handouts by the end of the year.

BINDURA - "Even if the children complain of hunger there is nothing we can do about it," says Rabian Chidamba, 40, a mother of four who lives in Musana district northwest of the capital Harare.

She has cut the family&39;s meals to two a day as she ekes out her small stock of the staple food, corn.

Breakfast is tea with home-baked cornmeal bread, while supper is cornmeal and fried kale, occasionally supplemented with a small portion of meat.

"When the children get hungry between meals they go and look for wild fruit," Chidamba says.

She still has some corn in her makeshift granary, unlike many of her compatriots in other districts whose food stores are empty, but the next harvest is not due until April or May next year.

"Our harvest came to 10 bags of maize instead of the 30 bags we usually get," she said.

Chidamba usually sells surplus corn to raise money for her children&39;s school fees and other necessities, but this year&39;s harvest is not enough even to feed her own family.

At least 1.5 million Zimbabweans are in need of food aid, according to the United Nations World Food Programme and other aid agencies.

Once a major producer of corn, Zimbabwe has become a perennial importer of food following a slump in agricultural production blamed on President Robert Mugabe’s land reforms, which saw the seizure of land from white commercial farmers for redistribution to landless blacks.

This year, drought has played a major role in reducing harvests in many southern African countries, with Malawi, Zimbabwe, Namibia and Botswana among the worst-hit.

An estimated 27.4 million people out of the region&39;s combined population of 292 million -- or nearly one in 10 people -- will be depending on food handouts by the end of the year.

Mugabe says the low yields are due to erratic rains caused by climate change, along with a lack of fertiliser, seed and farming equipment for the beneficiaries of his land reforms, most of whom lacked the means to run farms.

To alleviate hunger this year, the government has relaxed import regulations to allow individuals and private companies to import grain to supplement local supplies.

So far imports consist of maize grain from Zambia and maize meal from South Africa, according to the agriculture ministry.

Vice President Emmerson Mnangagwa has appealed for cash from "development agencies and the private sector" to ensure that the vulnerable are not "exposed to hunger and starvation".

However, the USAid-funded Famine Early Warning System Network has warned that "the lean season humanitarian assistance is expected to be lower than average due to a challenging funding situation".

WFP said it will start distributing food at the end of September to recipients who will work on projects including building small dams, repairing roads and starting vegetable gardens.

"Because of the poor harvest this year, food security levels are deteriorating earlier during the lean season than usual," said WFP information officer Tinashe Mubaira.

"Consumption coping strategies at the moment are reduction of portion sizes and eating fewer meals. Communities in districts bordering neighbouring countries are crossing over to Mozambique and Zambia for casual labour," he said.

Zvidzai Nyakudirwa, a storekeeper in Chinamhora communal lands, said desperate villagers were bartering their livestock for maize, often getting a bad deal.

They were also selling their livestock "at very low prices", he said.

"It&39;s tough for many families here," said Nyakudirwa, noting that most of his customers were now travellers passing through, rather than the villagers themselves.

Among the worst affected areas are the southern province of Matabeleland North, Masvingo and Matabeleland South, according to government figures.

South Africa, the regional breadbasket, has also been hard hit by drought, recording a 31 percent decline in output this year.

The current maize harvest in South Africa is "the lowest yield since 2007," the country&39;s agriculture department told AFP, adding that the country will have to import around 600,000 tonnes of maize to cover the deficit and meet its contractual export obligations.