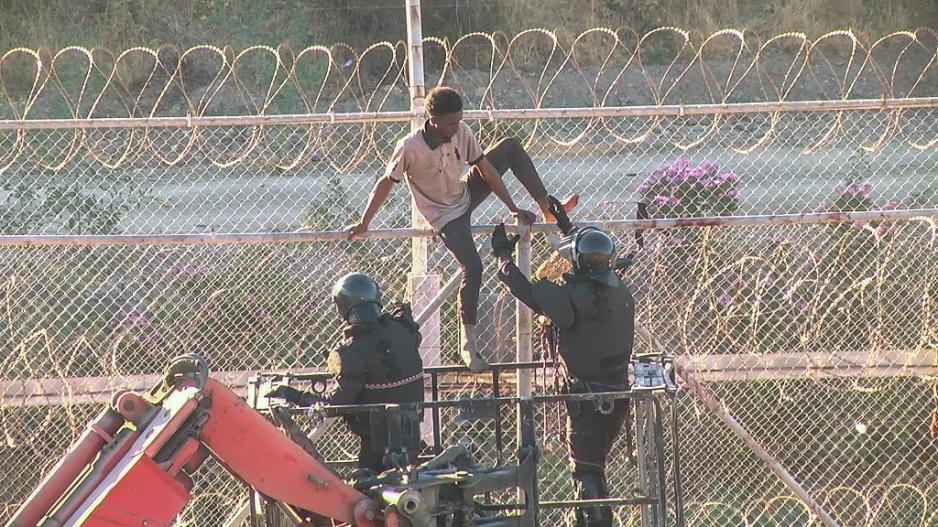 A migrant in this still image from video climbs the border from Morocco to Spain's North African enclave of Ceuta, Spain, 26 July 2018.

MADRID - More than 600 African migrants reached the Spanish territory of Ceuta on Thursday after storming a double border fence with Morocco and attacking police with caustic quicklime and excrements.

The scramble over the barbed wire-decked barrier is the biggest in Ceuta since February 2017, when more than 850 migrants entered the overseas territory over four days.

The incident further increases pressure on Spain, which has now surpassed Italy as the number one destination for migrants crossing the Mediterranean by boat.

More than 19,580 people have landed on Spanish shores so far this year, according to the International Organization for Migration.

A spokesman for the Guardia Civil police force in Ceuta told AFP close to 800 migrants had stormed the double barrier, which is also covered in small blades, early on Thursday morning from Morocco.

Moroccan police stopped around 100 of them, while 602 managed to climb over into Spain.

Some were caught by Spanish police between the double barrier or stuck on top and returned to Morocco.

READ: Keep out! Ten of the world&39;s most significant walls

Spain&39;s new Interior Minister Fernando Grande-Marlaska said last month he would "do everything possible" to remove barbed wire from border fences that surround Ceuta and Melilla, another Spanish territory on Morocco&39;s northern border.

Both territories have the European Union&39;s only land borders with Africa, drawing migrants trying to reach the bloc.

The migrants scrambled over the fence "all of a sudden", some pelting officers with "plastic containers full of excrements and quicklime... stones and sticks", the Guardia Civil police said.

They also set spray cans on fire, using them as "flame-throwers."

Fifteen police officers were injured in the violence, some sustaining burns to their face and arms.

Red Cross spokeswoman Isabel Brasero said 30 migrants also needed medical treatment, many of them cutting their hands and legs as they scrambled over the barbed wire.

While 16 were taken to the hospital, the rest were sent to a migrant arrival centre, the Guardia Civil said.

Local television footage showed some migrants straddling the top of the barrier.

One of them was seen stuck in barbed wire, with Spanish police using cutters to release him before helping him down.

The Guardia Civil&39;s AEGC union on Thursday called on the government to clarify its "plan B" to maintain security if the barbed wire was removed.

"We&39;re one of the main entry points from the third world into Europe and none of those in charge at the interior ministry has wanted to see or resolve the problems this is causing," the union said in a statement.

"Today demonstrated that these problems are going to worsen if more Guardia Civil and anti-riot and protection equipment fail to arrive when the barbed wire is removed."

Italy used to be the first entry point for migrants taking boats from Libya, an unstable country where armed factions vie for power and human traffickers proliferate.

He insists the country is overwhelmed even if arrivals have dropped by 80 percent compared to the height of the migration crisis, which erupted in 2015.

He warned that more migrants would take the western Mediterranean route to Spain as a result of Rome&39;s actions, calling on Europe to draw up a viable, long-term action plan or be faced with "very serious problems."