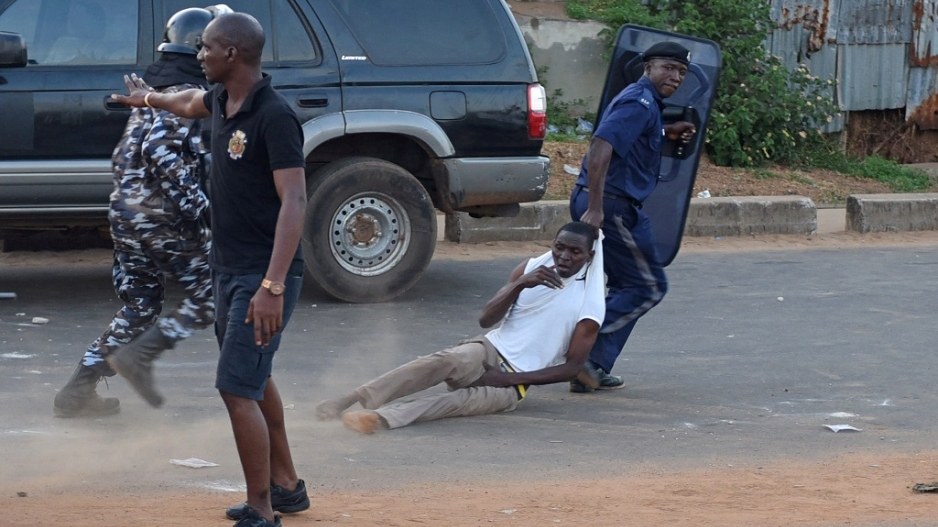 Anti riot policeman drags away a supporter of Sierra Leone People's Party (SLPP) during a protest against the police attempting to search the offices of Julius Maada Bio, the presidential candidate for (SLPP) in Freetown, Sierra Leone March 7, 2018.

FREETOWN – Sierra Leone&39;s electoral commission sounded the alarm on Saturday over a wave of violence between rival groups ahead of a run-off presidential vote later this month.

Opposition leader Julius Maada Bio, from the Sierra Leone People&39;s Party (SLPP), took 43.3 percent of votes in the first round on March 7, while Samura Kamara of the incumbent All Peoples Congress (APC) took 42.7 percent.

Violence was reported between SLPP and APC supporters in the southern city of Bo, as well as several other cities where some lodgings were burned.

Staff of the National Electoral Commission were attacked and injured in Bo, the commission said.

In a joint statement from diplomatic missions including the United States, European Union and former colonial power Britain, diplomats urged calm ahead of the March 27 vote.

"We appeal to all Sierra Leoneans to remain peaceful and respectful during the democratic process," according to the text.

"We also entreat all political supporters to keep political activities and exchanges civil to maintain an atmosphere of tolerance and respect."

The SLPP and the APC dominate Sierra Leone&39;s politics and have ruled alternatively since independence from Britain in 1961.

The export-dependent economy of the mineral-rich but impoverished West African country is in a dire state following the 2014-16 Ebola crisis, while a commodity price slump has driven away foreign investors.