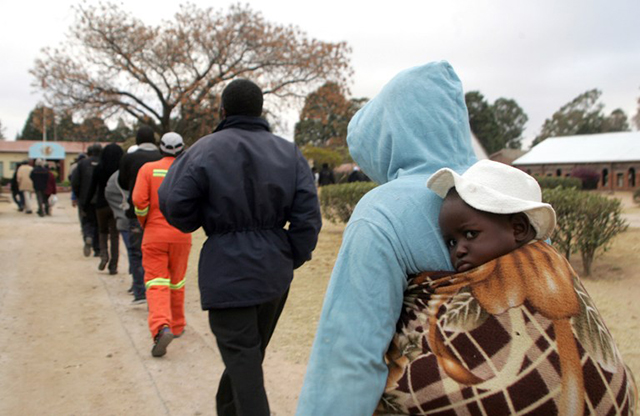 ZIMBABWE, Harare : Voters in Epworth township queue to vote at a polling station during presidential elections in Zimbabwe on July 31, 2013.

The video (see gallery above) shows what appears to be Zimbabwean voters being bussed from another district to a voting station in Mount Pleasant, in the capital, Harare.

In it, Finance Minister Tendai Biti -- who is also the Secretary-General of the Movement for Democratic Change-Tsvangirai (MDC-T) -- can be seen confronting officials, voters, and media at the polling station.

"This is not on, how can we cheat like this? I think we shouldn’t allow this," he says, upon his arrival at Mount Pleasant.

He alleges that thousands of voters were brought by bus to the capital, from rural areas hundreds of kilometers away, to vote for President Robert Mugabe&39;s Zanu-PF party.

A clearly enraged Biti is seen to be saying, “Ask this one where does he stay in Mount Pleasant”.

"They’ve been bussed in with buses. Ask one of them a single address in Mount Pleasant, just one," he continues.

He also claims many were underage.

It is not exactly clear who filmed the video, as several versions have been posted online.

It referred to thousands of voter registration slips -- reportedly fraudulent -- having being distributed to unemployed youths, vagrants and others who were then bussed in from areas around the capital.

The newspaper had contacted Biti to see if his party was aware of the alleged scam, and to alert him to the possibility the tactic was being carried out across a large number of polling stations.

Yesterday, MDC leader Morgan Tsvangirai -- who is also the country&39;s prime minister -- publicly stated the voters’ register had been rigged.  (See excerpt of statement in video attached above.)

This claim was rejected outright by President Robert Mugabe.

Biti addressed a news conference today, in which he too, accused Zanu-PF of election rigging by printing its own voter registration slips and then dispersing these.

In a tweet earlier today, which included a link to the video, the MDC-T said:

polling station results are trickling in and so are the shenanigans and machinations of Zanu PF.Below is a link... http://t.co/Z7fuiEAdus

A Guardian UK reporter, who can also be seen in the video, wrote of the incident in an article earlier today.

In Mount Pleasant where Biti claims 2,000 voters, many under-age, have been bussed in from up to 300km away. "The mother of all rigging."

David Smith quoted a bus driver, who had apparently ferried voters from Honde Valley "more than 185 miles away near the Mozambiquan border."

When questioned by Biti, under the eye of Smith, about his passengers, the bus driver was reluctant to give details of his drive.

"You’re carrying people, the question is where did you carry them from. It’s a simple question, so you need authority to say that or you’ve forgotten where you’ve pick them up?" Biti demanded.

"It&39;s not a secret - but we&39;re not allowed to say that," the driver is quoted as saying in response to Biti.

eNCA.com spoke to Andy Moyse, project coordinator Media Monitoring Project Zimbabwe, who said there were many questions which emanated from the video.

"I don’t doubt the rigging claims. There are many questions that need answers beyond the video. Who are those people and how did they get a chance to vote? Why did they hide their identities? How were they registered? Why did they need a bus if they are from the ward they were voting in?" he said.

When contacted by eNCA.com for comment, Zanu PF spokesperson Rugare Gumbo responded by saying, "He [Biti] should go and show us proof of this illegal act he is alleging."

"It’s all nonsense, he doesn’t know what he is talking about. How could we allow such a thing?"

Gumbo indicated that it was not unusual for people from other areas to vote in a different location, adding it was "normal."

He said issues with the voter&39;s roll would have been the likely reason that people had been bused in to Mount Pleasant to cast their vote.

"Some people registered but their names appeared in another voters roll and they had to travel to other places to vote."

eNCA.com also contacted MDC spokesperson Kumbirai Muchemwa for reaction. He said the party believed the video to be authentic, indicating it reflected the concerns which Tsvangirai had reported to AU and SADC monitors.

He said Biti&39;s visit to Mount Pleasant wasn&39;t planned, and suggested the fact it was filmed was a "coincidence."

In response to the reaction by Zanu-PF to the video, Muchemwa said, "Which election have you seen where people are bussed in to vote in their own constituency? It’s not normal.

"People should vote in the area where people are staying. Nobody knows where those people come from.

"What Zanu-PF is doing is targeting constituencies where there is MDC leadership to replace them with their leadership," he added.

There is no clear indication as yet, what the MDC plans to do as a result of this video. Muchemwa has suggested a two pronged approach by the party.

"There are two ways to address this, from a legal point of view and a political point of view. We cannot at this stage say which route we are going to take."

In the video, Biti could be seen speaking on the phone and saying that an urgent court application had to be filed “so that all the special votes at this station are disqualified until there’s verification.”