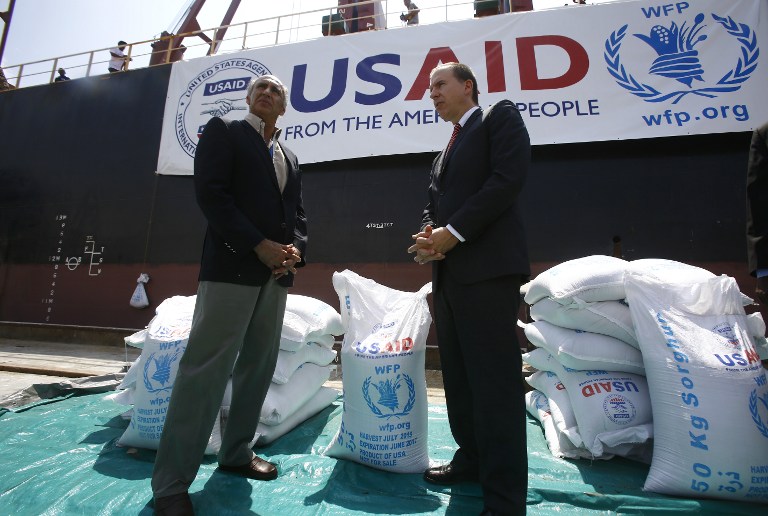 Benjamin Moeling (R), the charge d'affaires of the US embassy in Khartou, stands with WFP Sudan chief Adnan Khan as a US aid shipment organised by the US Agency for International Development and the World Food Programme arrives at Port Sudan.

WASHINGTON - US President Donald Trump on Tuesday opted to extend by three months the deadline on whether to lift decades-old sanctions against Sudan, saying "more time is needed" for review.

Trump was to decide by Wednesday whether to permanently lift Washington's sanctions on Sudan after his predecessor Barack Obama eased the embargo in January but kept Khartoum on a six-month review period.

In his executive order, Trump amended the deadline to 12 October 2017.

READ: US envoy to Sudan pushes for aid in ex-rebel bastion

Obama made the permanent lifting of sanctions dependent on Khartoum's progress on five areas of concern at the end of the review period.

Washington imposed a complex set of economic sanctions on Sudan in 1997 for its alleged backing of Islamist militant groups.

Washington also justified the embargo with accusations of scorched-earth tactics by Khartoum against ethnic minority rebels in war-torn Darfur.

At least 300,000 people have been killed and 2.5 million displaced since a brutal conflict erupted in Darfur in 2003, the United Nations says.

Sudanese President Omar al-Bashir is wanted by the International Criminal Court for genocide and war crimes related to the conflict in Darfur, charges he steadfastly denies.

Prior to Trump's measure, the United Nations said it hoped the United States would make a "positive decision" on sanctions against Sudan for allowing more humanitarian aid access across war zones as sought.

Giving more access to humanitarian workers was one of the five conditions Obama insisted Sudan must meet before the sanctions can be lifted permanently.

Obama's other conditions included counterterrorism cooperation with the United States, an end to hostilities against armed groups in Sudan and halting support for insurgents in neighbouring South Sudan.

Several think tanks had called for extending the review period, saying Khartoum needed to do more for the embargo to be lifted.

After Trump delayed the decision, Washington-based think tank Enough Project said the Trump administration should now devise a new set of "smart and modernised" sanctions that would spare the Sudanese people.

The new sanctions should "target those who are most responsible for grand corruption and atrocities, including air strikes on villages, attacks on churches, obstruction of humanitarian aid, jailing and torturing opposition figures and civil society leaders, stealing elections, and undermining peace efforts", John Prendergast, founding director of Enough Project, said in a statement.