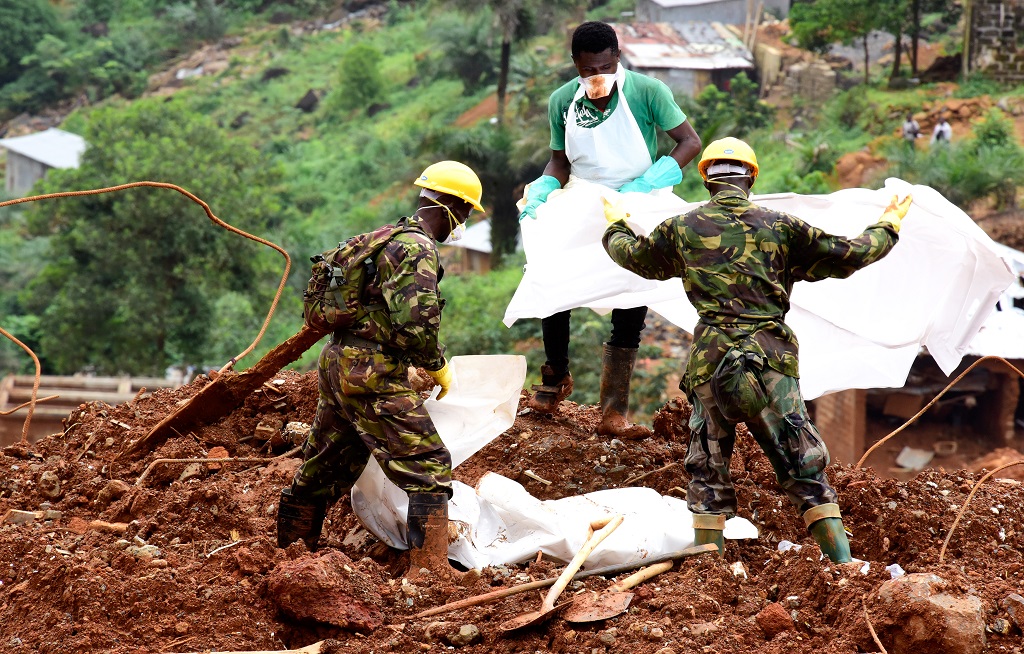 A volunteer and soldiers cover a victim found in the mud and debris, days following the partial collapse of a hillside that swept away hundreds of homes in a neighborhood of the capital Freetown on August 19, 2017.

FREETOWN – The death toll from a mudslide and flooding that struck Sierra Leone's capital Freetown has reached 441, the government said on Saturday.

"I've rescued 40 of my neighbours" - one man's efforts to help those affected by mudslides and flooding in Sierra Leone. pic.twitter.com/13nv00r0jx

"Four hundred and forty-one corpses (were) buried as at yesterday," the deputy minister of information and communication, Cornelius Deveaux, told AFP, adding that the number of missing was "still being calculated."

A tally of deaths, issued on Friday by the Red Cross, had stood at more than 400, with around 600 others listed as missing.

"We buried 50 more bodies on Friday. We have so far buried 450 corpses," he told AFP. "Most of the bodies were found decomposed and families were not allowed to identify (them)."

He added: "We're receiving calls from disaster-hit communities every three to four hours about a corpse found in a drainage or under a collapsed building."

Death toll caused by devastating mudslides in Sierra Leone has risen to 499, govt says, almost 1/3 of victims were children.

Three more bodies were found in a search for survivors in the Regent district, where the side of a hill collapsed, the emergency services said.

The disaster struck on Monday after Freetown, home to 1.2 million people and the capital of one of the world's poorest countries, had been pounded for three days by torrential rain.

According to the charity Save the Children, the disaster killed 122 children and left 123 orphaned.

Water-borne diseases such as cholera and malaria are a major fear.

"This is a potential health hazard. That's why we need to continue the operations to ensure that we remove as much dead bodies as possible," said Colonel Abu Bakarr Sidique Bah of the Sierra Leone armed forces.

May the Gods comfort the people of Sierra Leone ----

But the search for victims has been arduous, especially in the Regent neighbourhood.

"It is actually thousands of tonnes of rubble that have fallen... (down) the hill... And the inclement weather, the rain, has also made it very difficult for equipment to move within the affected area," he said.

Flooding is an annual menace in Sierra Leone, where ramshackle homes are regularly swept away by seasonal rains. In 2015, floods killed 10 people and left thousands homeless.