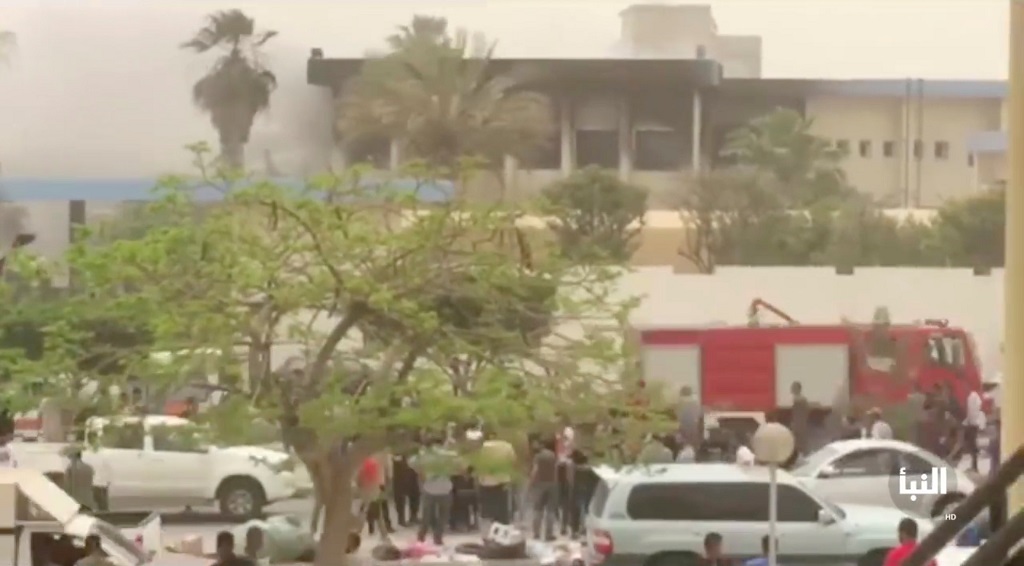 The site of suicide attack on Libyan electoral commission is seen in Tripoli, Libya, May 2, 2018 in this still picture obtained from social media video.

TRIPOLI - The Islamic State jihadist group claimed responsibility for a deadly attack on Libya&39;s election commission in the capital on Wednesday, its propaganda agency said.

Suicide attackers killed at least 12 people at Libya&39;s electoral commission in the capital Tripoli on Wednesday, authorities in the violence-wracked country said, after witnesses reported thick smoke and gunfire.

The internationally backed Government of National Accord (GNA) said it was dealing with "the consequences of the cowardly suicide attack" after the health ministry put the toll at 12 dead and seven wounded.

"They killed the guards before opening fire at people on the premises," he said.

At least two of the attackers detonated their explosives when the security forces arrived, Damja added, describing the building as seriously damaged after it caught on fire.

Security forces have since brought the situation under control, he said, while the site has been sealed off.

Eyewitnesses earlier said shots were heard and black smoke could be seen rising from the headquarters of the national election commission.

The UN mission in Libya condemned the "terrorist attack" and said it extended "its condolences to the families of the victims who lost their lives".

"Such terrorist attacks will not deter Libyans from moving forward in the process of consolidating national unity and building the state of law and institutions," it said on Twitter.

The UN is hoping that Libya can hold elections this year as it seeks to leave behind years of chaos since the 2011 ouster of dictator Moamer Kadhafi.

UN special envoy Ghassan Salame said in February he was aiming for parliamentary and presidential elections in the North African country by the end of 2018, but warned conditions were not yet ready for polling.

Exclusive Alnabaa: Video from the scene of explosion at the HNEC building in TripoliAlnabaa Libya pic.twitter.com/vs5Yu8XOAt

The electoral commission is considered to be one of the few credible and independent institutions in the country.

Elections were banned during Kadhafi&39;s 42-rule and after his ousting legislative polls were organised in 2012 and 2014.

But turmoil has continued in Libya with rival militias, tribes and jihadists vying for territory and the country&39;s vast oil wealth.

A 2015 UN-backed deal to set up the GNA in Tripoli failed to end the turmoil, as divisions continue with a rival administration in the east.

Human Rights Watch warned in March the country was far from ready in political, judicial or security terms for elections, citing harassment of activists and journalists as among the problems to be overcome.

A new constitution has to be put to a referendum and an electoral law adopted before polling.

As of March, 2.4 million Libyan voters had been registered of a population of six million.

While most recent attacks across Libya have been outside Tripoli, the capital remains mired by insecurity.

In January clashes between rival militias around the city&39;s only working international airport left some 20 people dead.

In 2015 the Islamic State group claimed an attack on Tripoli&39;s luxury Corinthia Hotel that killed nine people, including five foreigners.