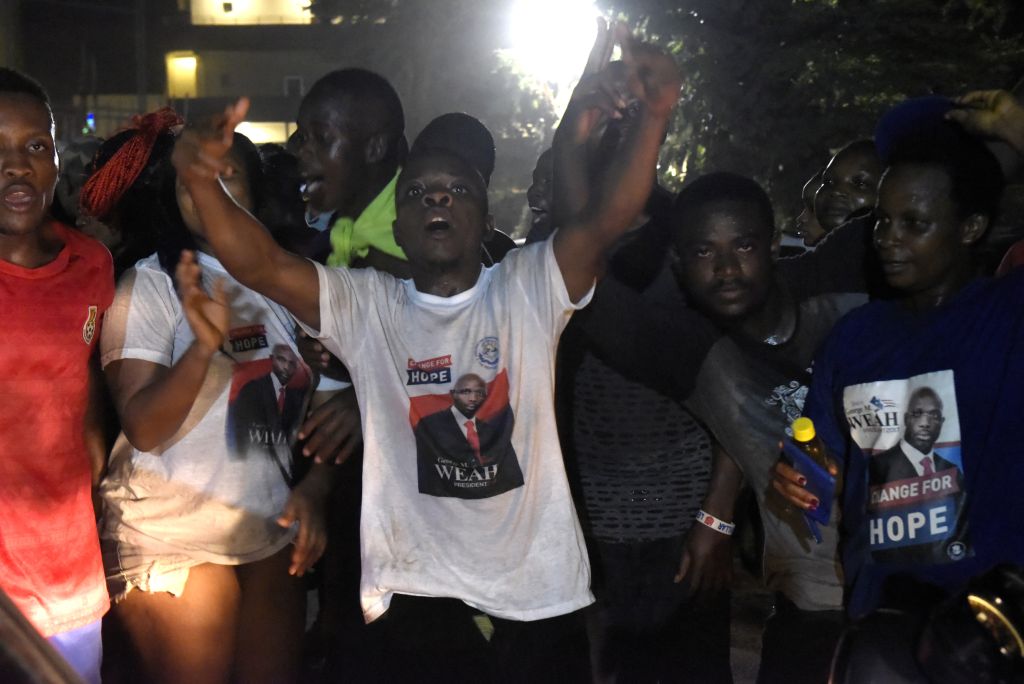 With almost all ballots counted, National Election Commission President Jerome Korkoya said final results would be released on Friday, but Weah wasted no time in acknowledging his win.

"My fellow Liberians, I deeply feel the emotion of all the nation. I measure the importance and the responsibility of the immense task which I embrace today. Change is on," he posted on Twitter.

Hundreds of his supporters took to the streets of Monrovia, singing, dancing and embracing each other as news of his victory spread.

"I&39;ve never been so happy in all my life. We were in opposition for 12 years. We&39;re going to make history, like the children of South Africa did. I&39;m so excited," said Josephine Davies, vice president of the youth wing of Weah&39;s Congress for Democratic Change.

PROFILE: Ex-football star Weah in bid to be Liberia&39;s next leader

Weah, 51, is set to replace Ellen Johnson Sirleaf, who took over in 2006 at the helm of the west African state founded for freed slaves.

The NEC said Weah won 61.5 percent of Tuesday&39;s run-off vote, which was delayed several weeks after a legal challenge from his opponent, Vice President Joseph Boakai, following October&39;s first round.

The NEC said that with 98.1 percent of all votes counted, Boakai had only secured 38.5 percent support.

A good time to reflect on just how good George Weah was on the pitch through a man who stunningly good himself. pic.twitter.com/HtQlp0vtL8

Ahead of Thursday&39;s result announcement, armed and helmeted police deployed outside the poll body&39;s headquarters as Weah supporters gathered and began rejoicing.

"The Liberian people clearly made their choice... and all together we are very confident in the result of the electoral process," tweeted Weah before the official results were announced.

Sirleaf&39;s office said it had set up a team "for the proper management and orderly transfer of executive power from one democratically elected president to another", adding that it included several ministers.

The tumultuous events of the past 70 years in Liberia, where an estimated 250,000 people died during back-to-back civil wars between 1989-2003, have prevented a democratic handover from taking place since 1944.

Sirleaf&39;s predecessor Charles Taylor fled the country in 2003, hoping to avoid prosecution for funding rebel groups in neighbouring Sierra Leone. Two presidents who served prior to Taylor were assassinated.

The UN and regional bloc Ecowas hailed the peaceful nature of the vote, with UN Secretary-General Antonio Guterres praising "the government, political parties and the people of Liberia for the orderly poll", which the EU said "generally respected constitutional rules".

The election passed without major incident despite weeks of delays caused by legal challenges and many said they were looking forward to a peaceful handover after 12 years under Sirleaf.

The Sirleaf administration, elected in 2005, guided the nation out of the ruins of war and through the horrors of the 2014-16 Ebola crisis, but is accused of failing to combat poverty and corruption.

Weah, the only African ever to have won FIFA&39;s World Player of the Year and the coveted Ballon D&39;Or football award, missed out on the presidency in a 2005 bid.

He was similarly frustrated when he ran for vice-president in 2011, but his CDC party repeatedly urged its young and exuberant supporters to keep calm.

The run-off was delayed for seven weeks due to legal challenges lodged by Boakai&39;s Unity Party against the electoral commission over the conduct of the first round, but many of the complaints appeared to have been addressed in the second round.