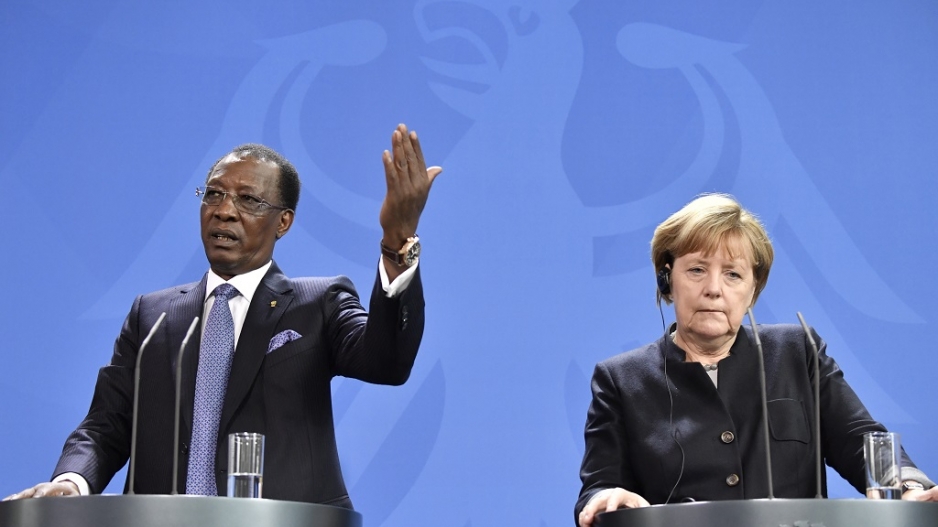 BERLIN - German Chancellor Angela Merkel wraps up on Friday a week of Africa diplomacy aimed at slowing the flow of migrants to Europe from a continent battered by conflict and poverty.

She will host Nigerian President Muhammadu Buhari on Friday, having also met Chad's head of state, Idriss Deby in Berlin. Earlier in the week she took a a whirlwind tour to Mali, Niger and Ethiopia, the seat of the African Union.

As Germany, Europe's top destination for people fleeing war and misery, looks to chair the G20 next year, it has pledged to step up efforts to help Africa and fight the causes of the mass migration.

"I think we will need to take a vastly greater interest in the destiny of Africa," Merkel said at the start of her first major Africa trip in five years. "The well-being of Africa is in Germany's interest."

Data backs up that notion -- while most asylum-seekers in Germany so far this year came from Syria, Afghanistan and Iraq, Germany has also taken in over 13,000 Eritreans and thousands from other African countries.

More than 10,000 came from Nigeria, the oil-rich economic giant now grappling with a plunge in crude prices and the Boko Haram jihadist insurgency that has claimed over 20,000 lives and spilled into Cameroon, Chad and Niger.

During her trip Merkel repeatedly warned Africans against crossing dangerous deserts and seas for an uncertain future in Europe.

"Often it's the young people who head for Europe with completely wrong ideas," she said in Addis Ababa. "They risk a life-threatening journey without knowing what's waiting for them or even whether they'll be able to stay."

The best way to stop the mass flight would be to encourage greater stability in their countries of origin, Merkel said, picking up on the theme of an EU-African Summit held in Malta last year.

The list of goals is ambitious -- promoting democracy, fighting terrorism and fostering prosperity through investment.

In Mali, Merkel said it was crucial that "African countries don't lose their brightest minds", needed to develop their own countries.

Merkel said that as chair of the Group of 20, Berlin would next year host a conference on investment in Africa, especially in the transport and energy sectors.

The aid was relatively modest compared with something on the scale of the "Marshall Plan", the US's $12-billion post-WWII assistance to Europe, that President Mahamadou Issoufou called for from the EU.

"Merkel's trip was mainly a message sent to European and German audiences that said, 'we are actively doing something'," to reduce migrant flows, said Annette Weber of the German Institute of International and Security Affairs.

With huge youth unemployment, repression and conflict in many states pushing people to leave home, she said, the migratory pressures were unlikely to stop soon.

Berlin has proposed EU deals with North African countries modelled on the pact the bloc this year struck with Turkey, the main transit country for Middle Eastern migrants.

Under that controversial deal, the EU pledged billions in aid and eased visa access in return for Turkey taking back irregular migrants stranded on Greek islands and fighting traffickers.

The EU Commission may take some convincing, however, of trying to apply the costly and uncertain approach in Africa.

According to news weekly Spiegel, EU Enlargement Commissioner Johannes Hahn has already voiced his concern with the chancellery.

Other approaches have also met with mixed success. Germany this year moved to declare Algeria, Morocco and Tunisia as safe countries of origin, to raise the bar for asylum requests.

But the bill has been stuck in the upper house for months over human rights concerns in those Maghreb nations.

On Thursday, German Interior Minister Thomas de Maiziere suggested that migrants rescued at sea should be taken to "accommodation facilities" in north Africa.

"Their need for protection would be verified and we would put into place a resettlement to Europe with generous quotas, fairly divided between the European countries," he told reporters in Luxembourg.

"The others have to go back to their home countries."