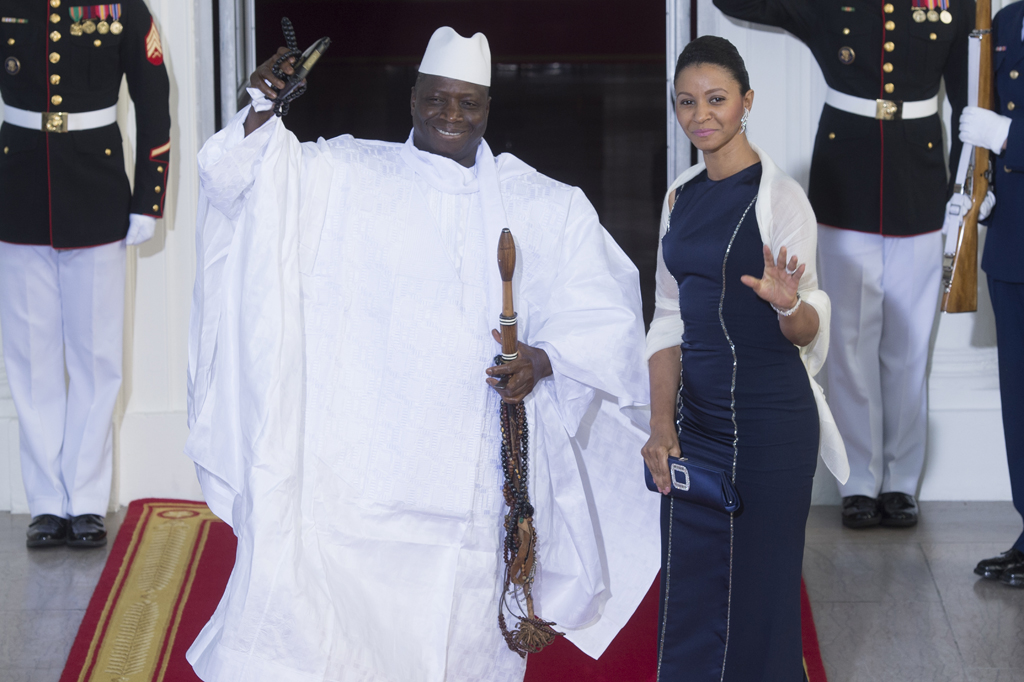 A file photograph of Gambian leader Yahya Jammeh, whose regime is accused of human rights abuses.

BANJUL - The Gambia is marking its 50th year of independence, with festivities overshadowed by growing complaints over its rights record and the regime increasingly seen abroad as a pariah.
President Yahya Jammeh, who has ruled the former British colony with an iron fist since seizing power in 1994, was due to launch three months of celebrations with a parade at the national Independence Stadium.
But preparations have been clouded by growing accusations from political opponents and international rights groups of enforced disappearances, torture and the muzzling of journalists.
The anniversary comes six weeks after the presidential guard put down a bid to seize power blamed mainly on ex-servicemen from the Gambian and US armed forces while Jammeh was in Dubai.
There has since been a wave of arrests, detentions and harassment targeting family members of those suspected of involvement, relatives and right groups have said.
Gambian law enforcement agencies including the feared National Intelligence Agency (NIA) have arrested at least 30 people since the beginning of January, according to Amnesty International.
Amnesty published a report three months ago stating that Jammeh&39;s opponents were being subjected to daily rights violations and detailing a crackdown by authorities on the media.
"The rights to freedom of expression and assembly are seriously curtailed as the government keeps a tight control of the media and journalists and human rights defenders continue to be arbitrarily arrested, detained and subject to enforced disappearance," it said.

Lawmakers recently passed several pieces of legislation criticised around the world for the restrictions they placed on freedom of speech.

These include an amendment to the criminal code which places harsher punishments on acts of public disorder, such as "singing abusive songs" and cross-dressing.
Opponents say Jammeh he has become increasingly paranoid, regularly sacking ministers and keeping only a tiny circle of trusted allies close to him.
After the failed coup attempt, the president reshuffled his government twice in less than two weeks, with high profile culls at the justice, foreign affairs, information, and transport ministries.

Today in History,Gambia became the 36th African nation to gain independence with him as the Prime Minister. pic.twitter.com/jBXDi6UhBa

Jammeh has also faced criticism for his restrictions on gay rights, which he has attacked numerous times in public -- including at the United Nations General Assembly in 2013.
He enacted a law in October creating the crime of "aggravated homosexuality" which carries a sentence of up to life imprisonment, according to Human Rights Watch (HRW).
"Naturally, Jammeh&39;s outlandish behaviour and penchant for self-promotion delights satirists," Graeme Reid, the director of HRW&39;s gay rights programme, said in a recent commentary on the group&39;s website.
"But while Jammeh may be a figure of fun from afar, at home his brutal rule is no laughing matter. Few dare speak out against him, as he rules a country with one of the worst human rights records in Africa."
Gambia, a tourism hotspot of 1.8 million people with an estimated 50,000 annual visitors from Britain alone, is planning numerous events to mark its Golden Jubilee as an independent state.
Festivities were due to kick off at 8:00 am (0800 GMT) with a parade at the national Independence Stadium in the western town of Bakau, followed later in by state banquets for high-ranking officials and foreign dignitaries.

A calendar of events to mark the milestone features youth and women&39;s rallies, numerous sports tournaments, a cookery contest, the state opening of the country&39;s new parliament building, poetry recitals and "religious entertainment".
But while some African heads of state, including Ghana&39;s President John Dramani Mahama, have agreed to attend, Western dignitaries are expected to shun a country which in the last 18 months has withdrawn from the Commonwealth, severed ties with Taiwan and drawn vociferous criticism from the US over human rights.