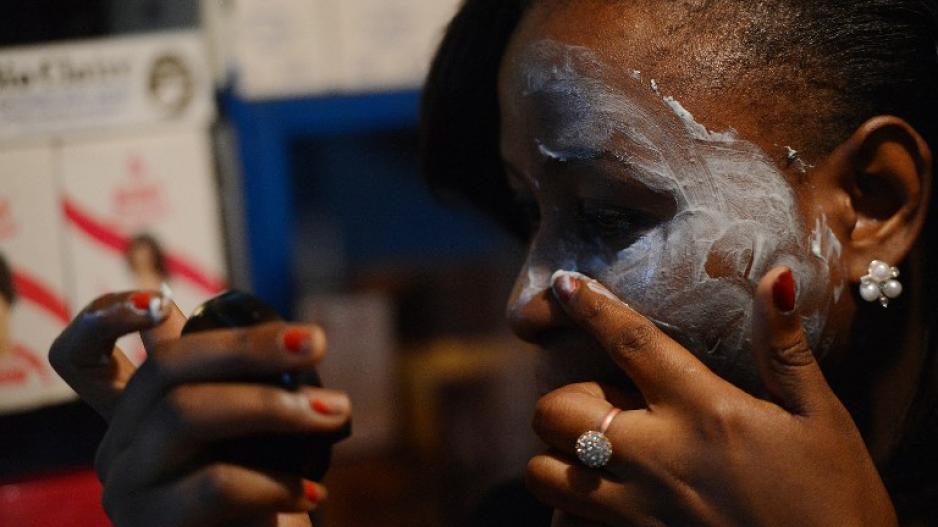 A beautician who works on Nairobi's River Road illustrates how to apply skin-lightening cream, on March 18, 2015.

With up to 70% of women using skin lightening creams in parts of Africa, Cote d’Ivoire has led the charge in tackling skin lighteners and has banned the practise nationally. It is time for the rest of the continent to follow.

Skin lighteners have become a common part of life in communities across the continent which is home to an estimated two thirds of the world’s darker-skinned population. In the late 1960s, 60% of urban African women reported using skin lightener formulas. It became the fourth most commonly used household product after soap, tea and tinned milk.

These days, 75% of Nigerian women and between 52% and 67% of Senegalese women use skin lightening products. A survey conducted in South Africa’s administrative capital Pretoria showed that 35% of women use them.

Demand is also high in Ghana, Tanzania and Kenya where buoyant economies and advertising have targeted young women of marriageable age. There has been a marked shift in male preferences toward women with light-coloured skin emphasising the idea of “racial capital”.

But skin lighteners are damaging. The World Health Organisation has banned the active ingredients of skin lighteners - a chemical agent called hydroquinone and mercury - from being used in any unregulated skin products.

Unregulated products have significantly higher quantities of hydroquinone and mercury than those recommended by dermatologists. Using them could lead to liver and kidney failureor hyperpigmentation, which is dark skin patches forming on the area where the product is used. There is also a risk of skin cancer because the melanin synthesis which protects the skin against ultraviolet radiation is inhibited by hydroquinone.

The word “yellowbone” has gained popularity in the US as well as countries like South Africa. It refers to a lighter-skinned black person, perpetuating the lengthy racist Eurocentric tradition which propagates negative images and aesthetics of black people and people of colour.

African descendants in America, the Caribbean and Brazil have internalised these fabricated and fictionalised images of themselves. In an American setting this is a psychological abnormality coined Post Trauma Slavery Disorder. In South Africa, it could be equated to what I have coined “Post-Apartheid Inferiority Disorder” (PAID). The most visible global symptoms include:

1) use of skin lightening or bleaching creams

2) preference for white or light-skinned friends and children

4) internalised inferiority and a lack of self-love or veneration

5) lack of group unity and trust.

Skin lightening is described in many different ways across the continent. In Mali and Senegal, the terms “caco” and “xeesal” are used while in Ghana, the term “nensoebenis” describes the condition of the skin after chronic skin lightener use.

With its political overtones, South Africa has a distinctive history with skin lighteners. Various ethnic languages describe the practice. In isiXhosa it is known as “ukutsheyisa” which means “to chase beauty”. In isiZulu it is known as “ukucreamer” meaning “applying creams on the skin”.

Skin lightening creams can be divided into legal products recommended by dermatologists and illegal, over-the-counter and unregulated products.

Most reputable skin lighteners are expensive. Because of this, the market is vulnerable to over-the-counter, unregulated and unsupervised use of skin lighteners. The use of these creams can result in irreversible skin damage.

The majority of illegal “depigmenting” or skin lightening creams can contain between 8% to 15% of hydroquinone. The use of hydroquinone in cosmetics has been banned since 2001. Hydroquinone is used in large quantities in paints and as a photographic developing solution.

Despite the laws restricting the use of hydroquinone, I found a range of different brands of skin lighteners available in pharmacies and supermarkets in the Johannesburg area.

The attraction to the practise is encouraged by overt advertising and the advent and influence of social media and mobile phones with roaming apps.

Although individuals have started speaking out against skin lightening, such as the Senegalese models who took a stand at the Dakar Fashion Week, governments need to take action. Regulations should ensure that the creams are safe and that illegal products are kept off the market. In addition, governments should encourage the view that being paler skinned isn’t a panacea and that black is beautiful too.