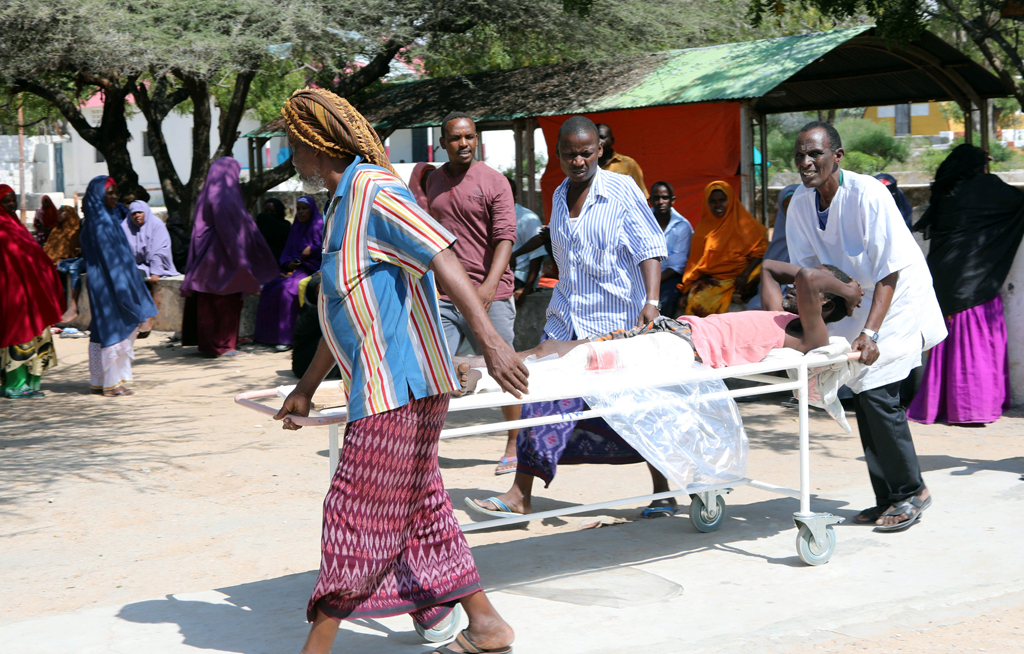 Relatives assist a man injured in an explosion in KM4 street in the Hodan district of Mogadishu, Somalia October 15, 2017.

MOGADISHU - World leaders from the United States, Britain and France on Sunday strongly condemned the weekend suicide bombing in Somalia, the worst attack in the country to date with at least 137 deaths.

Saturday's blast occurred at a junction in Hodan, a bustling commercial district of the capital Mogadishu which has many shops, hotels and businesses. Hundreds of people had been in the area at the time of the blast.

The United States condemned the bombing "in the strongest terms" in a statement released by the State Department.

Washington "will continue to stand with the Somali government, its people, and our international allies to combat terrorism and support their efforts to achieve peace, security, and prosperity that," the statement added.

British Foreign Secretary Boris Johnson said his country "condemns in the strongest terms the cowardly attacks in Mogadishu, which have claimed so many innocent lives".

French President Emmanuel Macron tweeted: "Solidarity with Somalia. Support to the African Union against Islamist terrorist groups. France stands by your side".

Moussa Faki Mahamat, the chairman of the African Union Commission asked the government "to show renewed unity at this critical time and overcome divisions, to rebuild cohesion at all levels of the federal institutions."

It said the pan-African body, which has deployed a peacekeeping mission in the east African country, would "continue its support to the Somali government and people in their efforts to achieve sustainable peace and security."

Police official Ibrahim Mohamed told AFP that the death toll could rise further "because there are more than 300 wounded, some of them seriously".

He described the bombing as "the deadliest attack ever."

Turkish President Recep Tayyip Erdogan's spokesman Ibrahim Kalin said Ankara was sending planes "with medical supplies", adding that the wounded would be flown to Turkey and treated there.

He did not specify numbers.

Turkey is a leading donor and investor in Somalia. In September, it inaugurated the largest foreign-run military training centre in Somalia, where local troops are due to take over the protection of a nation threatened by Shabaab jihadists.

There has been no immediate claim of responsibility, but the Shabaab, a militant group aligned with Al-Qaeda, has carried out dozens of suicide bombings in its bid to overthrow Somalia's internationally-backed government.

The fragile government and institutions, including its national army, are backed by the African Union's 22,000-strong AMISOM force and powers like the United States.

But the gradual withdrawal of the AMISOM troops is due to start in October 2018 and doubts persist over the readiness of Somali forces to confront the Qaeda-aligned Shabaab.