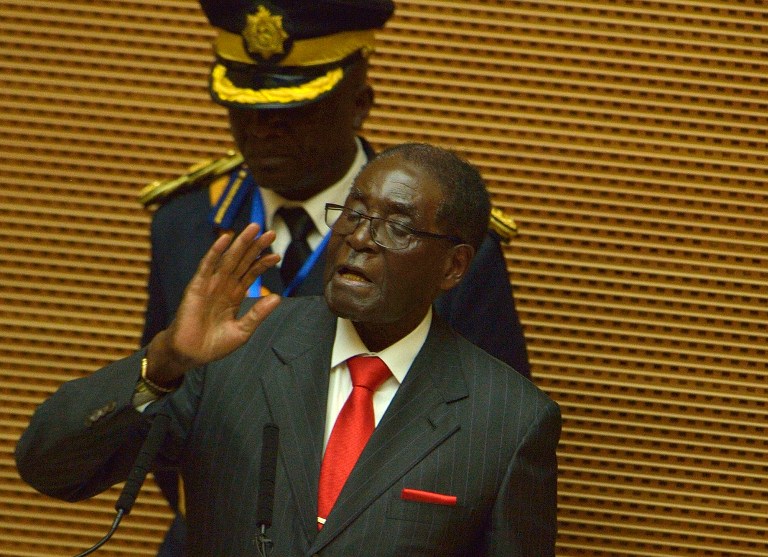 Outgoing African Union Chairperson and Zimbabwe's President, Robert Mugabe gives an address to the 26th presidential summit of the African Union on January 30, 2016 in Addis Ababa.

HARARE – Tensions are rising in Zimbabwe as a power struggle intensify within the ruling Zanu PF over who should succeed President Robert Mugabe, who turns 92 later in February.

A huge and restless crowd on Tuesday gathered at the Zanu PF headquarters in Harare, where Mugabe had arrived with his wife Grace, and was expected to come out and address the supporters of the two factions.

Grace Mugabe, leader of the Zanu PF women’s league, who recently returned to Harare after an unscheduled holiday, is at the centre of the jostling for the top position within the party, which is becoming increasingly public and aggressive.

A crowd had gathered at the party’s headquarters ahead of a meeting of Zanu PF’s politburo meeting on Wednesday night, where a clash was expected between Grace’s supporters and the war veterans who support Deputy President Emmerson Mnangagwa.

The Zanu PF women’s league is agitating for President Mugabe to appoint a woman as one of his two deputy presidents before the end of this year, which could put paid to Mnangagwa’s presidential aspirations.

The other vice president position has traditionally been reserved from a member of ZAPU, which merged with Mugabe’s Zanu PF as part of a unity pact in 1987 following the Gukurahundi massacres. The position is currently occupied by Phelekezela Mphoko.

If the party’s women’s league has its way, Mnangagwa would be the one to lose out.

There was a woman in the Zanu PF presidium, Joice Muguru. But then Grace Mugabe began a public campaign against her, accusing her of plotting a coup d’etat. Mujuru was sacked from her post and expelled from the party in 2014 as a result.

The woman’s post in the presidium was then quickly written out of the party’s shambolic constitution.

Now it seems Grace Mugabe and her team want the women’s position in the presidium to be re-instated, and that probably means the departure of Mnangagwa.

On Tuesday, the women’s league challenged Mnangagwa to “come out clean” ahead of the politburo meeting about whether he has any ambitions to succeed Mugabe.

The league’s Sarah Mahoka said Mnangagwa had failed to disassociate himself from repeated claims that he wanted Mugabe to step down ahead of the 2018 national elections.

“Why is he quiet about it and why is he seemingly hiding behind others? Does this mean that what we hear that he wants Mugabe to go is true? Why is he not denying that if this is not true?” Mahoka asked.

Zanu PF is now openly squabbling in the media, and war veterans say they will demonstrate against the leaders of the Grace Mugabe clique at the politburo meeting.

Insiders say security chiefs are with Mnangagwa. But the other faction, which Grace Mugabe seems to lead, known as G40, indicating younger people claims to have the interests of the ageing president, who turns 92 on 21 February.

Mugabe, who has ruled Zimbabwe for 36 years, is on record as saying only God will remove him from power.