Zimbabwe accuses France and US of protest plot 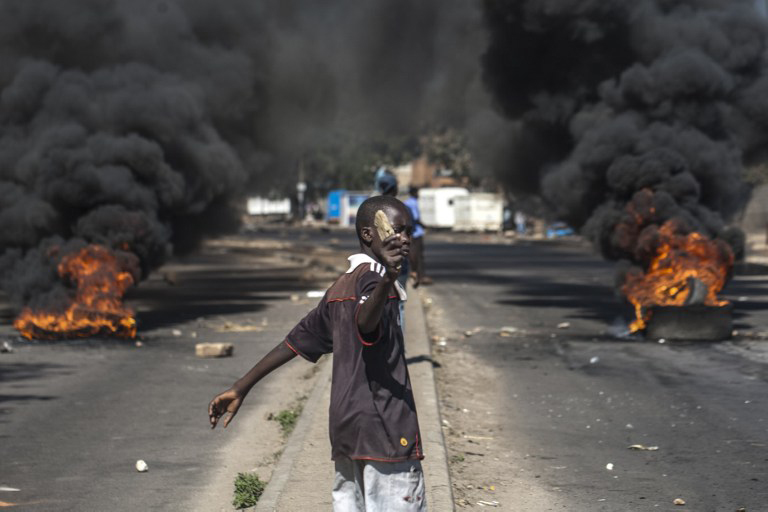 A protester throws rocks next to burning tyres during a demonstration on July 6 2016, in Bulawayo Zimbabwe.

HARARE - Zimbabwe on Sunday accused the US and French embassies of backing street protests and a national work boycott which closed businesses and paralysed the public transport system last week.

The strike action was the latest in a series of protests over growing economic hardship blamed on the policies of 92-year-old President Robert Mugabe, who has been in power for 36 years.

“We have gathered from our intelligence that there was involvement of western embassies in all these disturbances that have been taking place,” the state-owned Sunday Mail newspaper quoted home affairs minister Ignatius Chombo as saying.

“The evidence that we have gathered so far shows that the French embassy in Harare and other embassies are part of this plot as part of their regime change machinations."

The newspaper reported that US ambassador Harry Thomas had in May met one of the organisers of last week’s work boycott, the cleric Evan Mawarire, and that French ambassador Laurent Delahousse was “believed to have met Mawarire several times".

Delahousse denied ever meeting Mawarire and dismissed as “ridiculous” claims he backed the protests.

“I deny in the strongest terms any involvement with any organisation,” he told AFP.

“I am not in Zimbabwe to cause trouble but to help and support the people of Zimbabwe. These ridiculous accusations are certainly out of line.

"The authorities should focus on working for the good of the people and should investigate police violence.”

Public shows of dissent have been rare under Mugabe&39;s oppressive rule, but they have grown in recent months as the battered economy has ground to a virtual halt.

Banks have run short of cash, government salaries have been delayed and many basic imports banned at a time when the country has also suffered a severe drought that has left millions hungry.

The job stayaway called by civic groups last Wednesday was well supported across the country after news of the plan spread on social media and organisers have vowed to press on with more protests in the coming weeks.

Information minister Christopher Mushowe warned Sunday that the authorities were tracking “all those who are abusing the social media to cause unrest in the country”.

The government has warned that anyone sharing "subversive" material would be arrested.