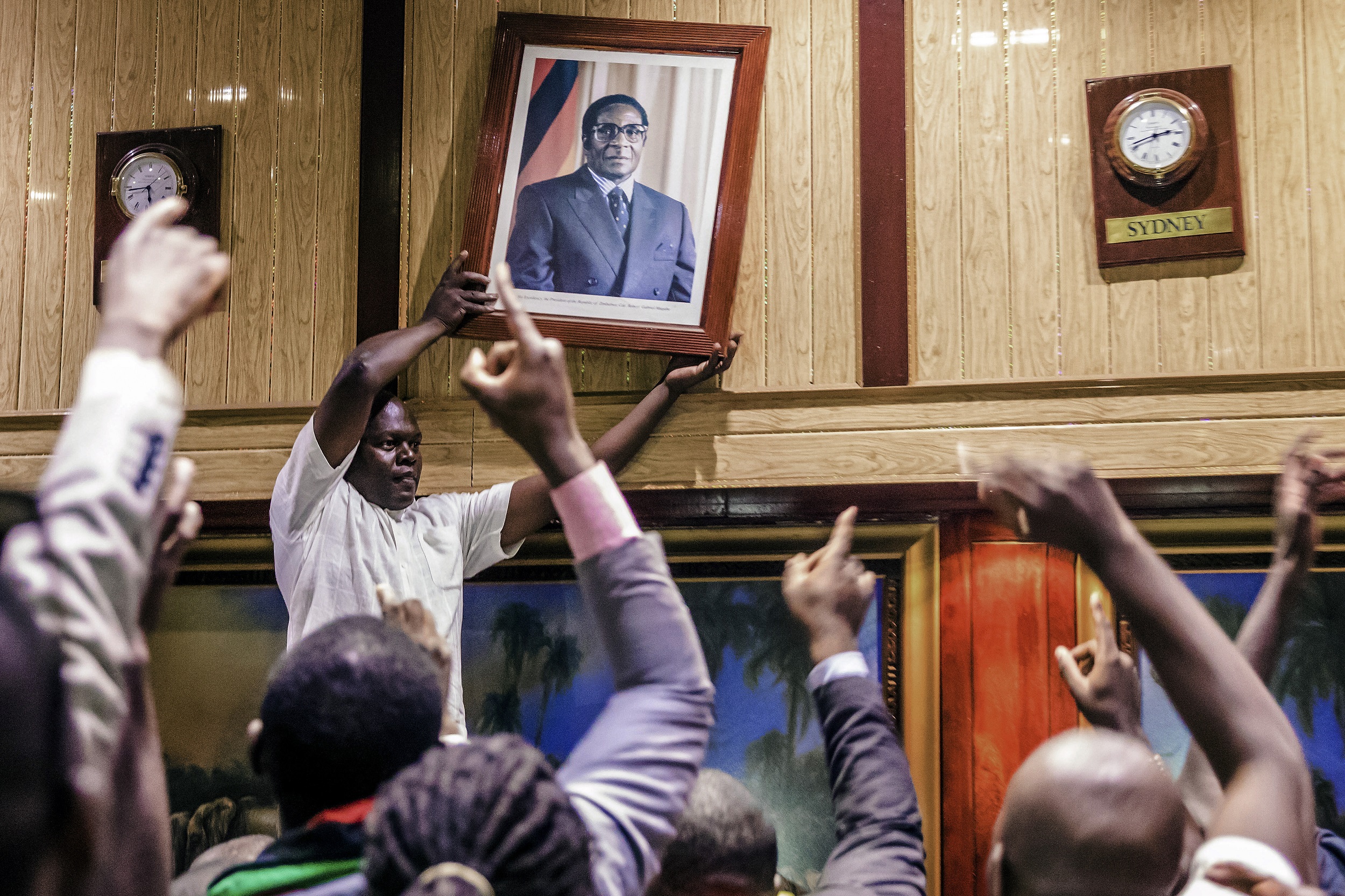 People remove the portrait of former Zimbabwean President Robert Mugabe from the International Conference Centre where parliament had their sitting.

HARARE - Zimbabweans waited on Wednesday to discover when their new leader would be appointed after president Robert Mugabe&39;s resignation brought a sudden end to a 37-year reign of authoritarian rule.

Mugabe&39;s tenure ended in an announcement at a special joint session of parliament where MPs had convened to impeach the 93-year-old who dominated every aspect of Zimbabwean public life for decades.

On the streets, the news that his long and often brutal leadership was over sparked wild celebrations on Tuesday evening. Car horns honked and large crowds erupted into ecstatic cheers and dancing.

The likely next president is Emmerson Mnangagwa, who Mugabe sacked as his deputy earlier this month in a move that pushed infuriated army chiefs to seize power and force Mugabe&39;s exit.

Mnangagwa was once a key Mugabe ally, but he was also chief rival of the president&39;s wife Grace in a bitter succession battle that erupted publicly in recent months.

"I, Robert Gabriel Mugabe... hereby formally tender my resignation... with immediate effect," said the letter which was read out by parliamentary speaker Jacob Mudenda.

"My decision to resign is voluntary," he said, speaking of his "concern for the welfare of the people of Zimbabwe and my desire to ensure a smooth, peaceful and non-violent transfer of power".

A man removed a portrait of Mugabe from a room inside the conference centre where MPs had assembled for the extraordinary session to impeach the defiant president.

Another bystander replaced it with an image of Mnangagwa, who critics accuse of being a ruthless hardliner guilty overseeing years of state-sponsored violence.

The ruling ZANU-PF party said Mnangagwa, who fled Zimbabwe after his sacking, could swiftly be named interim president as the country charts a way through the turbulence.

"Mnangagwa... will come back in the next 24 hours or so and he will be the one who will be sworn in to be (interim) president for 90 days," said party spokesman Simon Khaya Moyo on Tuesday.

The resignation capped a week in which the military seized control and tens of thousands of ordinary Zimbabweans took to the streets in an unprecedented show of dissent against Mugabe.

"I am so happy that Mugabe is gone, 37 years under dictatorship is not a joke. I am hoping for a new Zimbabwe ruled by the people," Tinashe Chakanetsa told AFP.

Mugabe had ruled Zimbabwe almost unopposed since independence in 1980 -- but efforts to position Grace Mugabe as his successor prompted intervention from the military that underpinned his regime.

His monolithic grip was shattered last week when armoured military vehicles took to the streets, blockaded parliament and soldiers placed him under house arrest.

The operation had all the hallmarks of a coup, but the generals stopped short of forcing him out.

As the crisis grew, the ZANU-PF party, an instrument of Mugabe&39;s brutal decades in power, removed him as party leader and began parliamentary proceedings to have him impeached.

"When he saw the turnout (of lawmakers), he probably realised he&39;d better jump before he was pushed," said Derek Matyszak, an analyst at the Pretoria-based Institute for Security Studies.

British Prime Minister Theresa May said the resignation gave Zimbabwe "an opportunity to forge a new path free of the oppression that characterised (Mugabe&39;s) rule".

The European Union&39;s diplomatic chief Federica Mogherini called for a solution that "respects the aspirations of the people of Zimbabwe for a more prosperous and democratic future".

The US embassy in Harare described it as a historic moment for the country.

Most Zimbabweans have only known life under Mugabe, whose time in power was defined by violent suppression, economic collapse and international isolation.