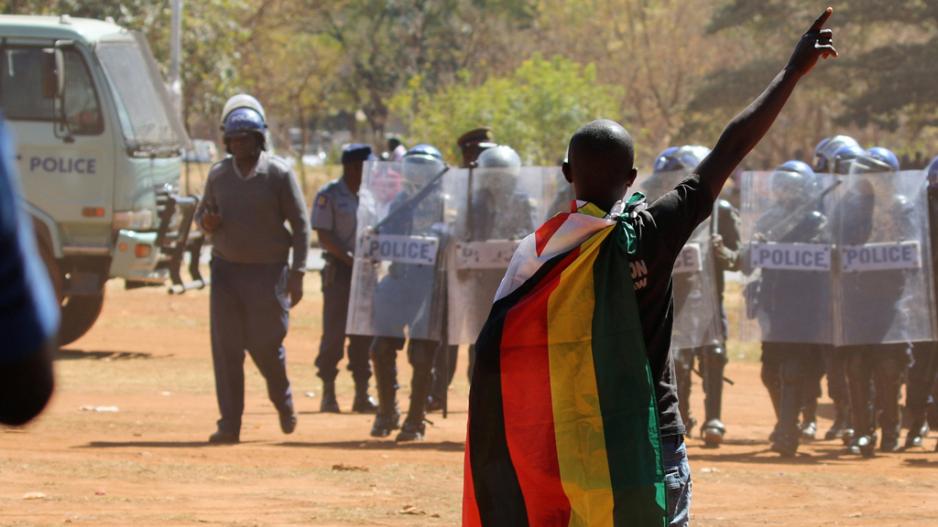 An opposition supporter faces police officers during a protest in Harare, Zimbabwe, August 26,2016.

HARARE - Zimbabwe&39;s high court on Wednesday overturned a two-week ban on protests in the capital Harare after a challenge from activists involved in a surge of demonstrations against President Robert Mugabe.

Mugabe has vowed to crack down on the protests, which have erupted over recent months as Zimbabwe has been pitched into deepening economic crisis.

"The court has said the ban was unlawful," Tendai Biti, a lawyer and opposition party leader among those who brought the case to court, told journalists.

"The judgement is a very brave judgement. We are very proud that the court recognised the power it has (and) importantly that courts will adjudicate matters without fear and favour."

Mugabe, who has routinely crushed dissent since he came to power in 1980, last week criticised the country&39;s courts after several anti-government protests turned violent.

Judges authorised an opposition demonstration in Harare on August 26 which degenerated into clashes between opposition supporters and security forces.

Mugabe later blasted judges for "reckless" rulings allowing demonstrations against his rule, saying he hoped they had "learnt a lesson".

Zimbabwe has suffered economic collapse over the last 15 years, with 90 percent of the population now not in formal employment.

The cash-strapped government has been slow to pay the salaries of public sector workers, including the military, while banks are running out of cash.

"The judgement is progressive. We are excited," Stendrick Zvorwadza, a protest leader and long-time critic of Mugabe, said after judge Priscilla Chigumba made her ruling.

"Like we have always been saying this (campaign) symbolises peace."

Zimbabwe Lawyers for Human Rights, who have represented scores of arrested protesters, said the ruling against the police ban on protest was "a victory for activists".

On Friday, another court denied bail to 58 people arrested during the August 26 protests when riot police fired tear gas, beat up several people and blocked off the site of an opposition demonstration in Harare.

Protesters fought back, throwing stones at police while some set tyres ablaze and pulled down the sign for a street named after Mugabe.

The demonstration -- which had been authorised by a court -- was to demand electoral reform before 2018 when Mugabe, 92, plans to stand for re-election.

Promise Mkwananzi, leader of the Tajamuka ("We are agitated") protest group, was also arrested at the protests and was denied bail when he appeared in court on public violence charges.

The last elections in 2013 were won by Mugabe in a vote the opposition said was rigged.