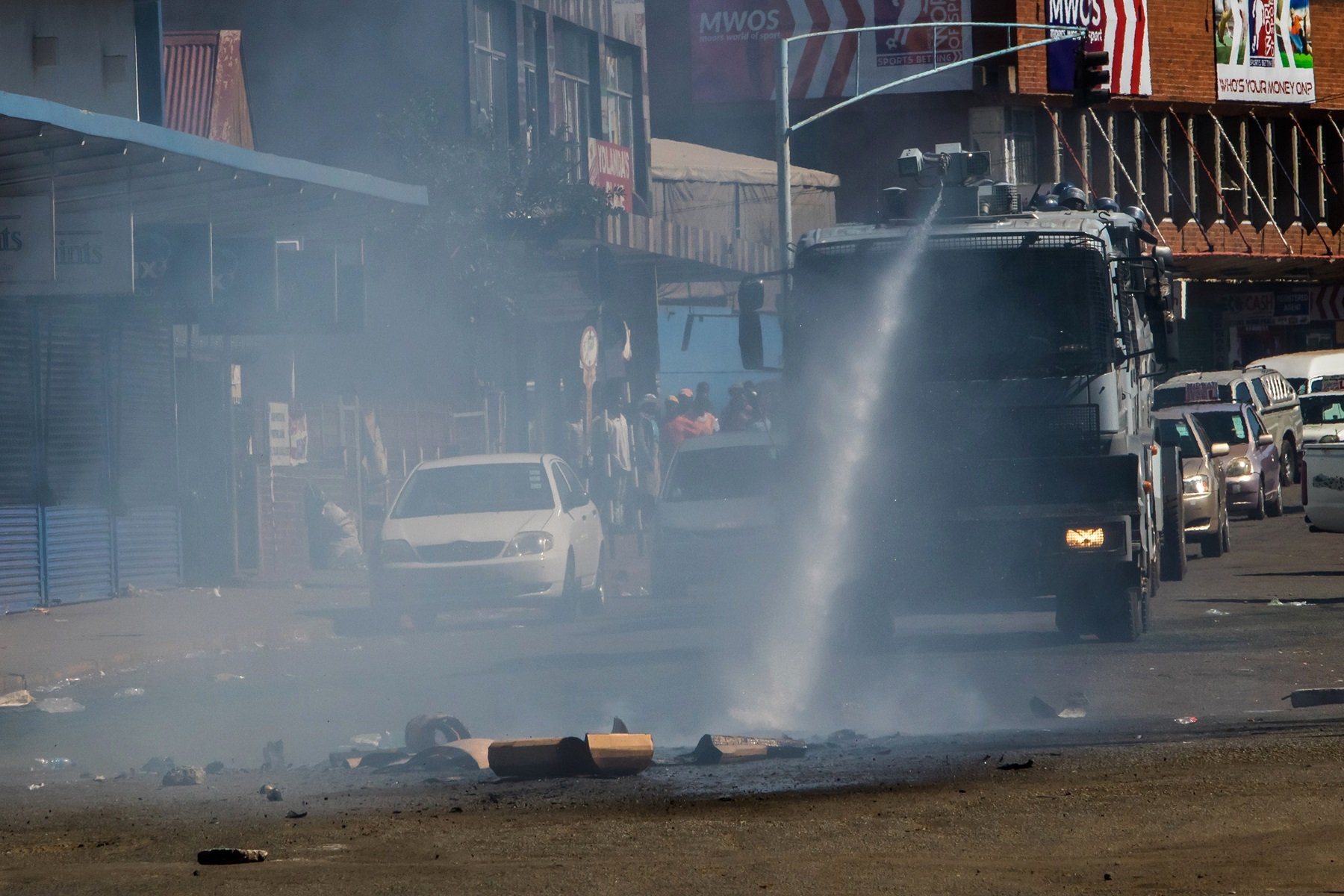 Riot police use a water cannon as they patrol the streets to break up barricades set up by the Movement for Democratic Change during protest over "uneven" distribution of voter registration centres for Zimbabwe 2018 general elections.

HARARE – Opposition parties fear a repeat of the 2008 election violence as Zimbabwe gears up to vote next year.

This comes after a vehicle of the opposition party MDC-T was torched at a car park in the high-density suburb of Kuwadzana in Harare on Wednesday night.

MDC-T vice-president Nelson Chamisa, who is also a Kuwadzana East legislator, told a press conference on Thursday that the ruling Zanu PF was planning a violent 2018 election campaign, adding that it was an “act of terrorism” and there would be no “willingness” on the part of the government to stop it.

The suspected arson attack happened after riot police brutally crushed a protest by MDC-T youth against the Zimbabwe Electoral Commission (ZEC) earlier in the day, which saw the opposition youth and the law-enforcement agents engage in running battles in the capital.

“Clearly this is a politically motivated initiative and we have only one suspect and it can only be our opposition, which is Zanu PF,” Chamisa said. “Our suspicion is not far-fetched because this is not the beginning. This is not the first time.”

He said Zanu PF only believed “in this sort of language so we can hear their voice”, adding that by so doing Zanu PF was instilling fear and firing warning shots of what to expect in 2018.

But Zanu PF spokesperson Simon Khaya Moyo challenged the opposition to provide proof that, indeed, the ruling party’s functionaries were behind the Wednesday night arson incident.

“If they have proof, they should go and report the matter to the police,” he said.

The burning of the vehicle comes after police earlier on Wednesday crushed an MDC-T youth assembly demonstration to call for the ZEC to implement electoral reforms to level the electoral playing field, which it says is tilted in favour of the ruling party.

In past elections, Zanu PF has been accused of using violence and intimidatory tactics against opposition activists, with the June 2008 presidential run-off widely regarded as the worst since the turn of the millennium.

The Heal Zimbabwe Trust (HZT), a non-governmental organisation focused on rebuilding national cohesion through promotion of tolerance and co-existence in local communities, on Thursday condemned the arson attack, saying political tolerance was a culture that the state must invest resources and time in in order to inculcate among citizens.

“The state has been dragging the implementation of the healing mechanism provided for in section 251 of the constitution. The National Peace and Reconciliation Commission  is a mechanism meant among other responsibilities to deal with the cyclical violent episodes, which have been resurgent during every election. Failure to establish the commission results in this current ‘vicious cycle of violence’,” HZT said.

The Zimbabwe Human Rights Association (ZimRights) expressed “grave concern” over the rise in political conflict in the country, at the same time warning of the possibility of more conflict ahead of the coming elections in 2018 “if the concerns of electoral reforms are not addressed”.

“Given that Zimbabwe has previously witnessed worse election-related violence, these alarming incidences and political developments should be taken seriously by the international community to avert a slide into more violence,” ZimRights said.