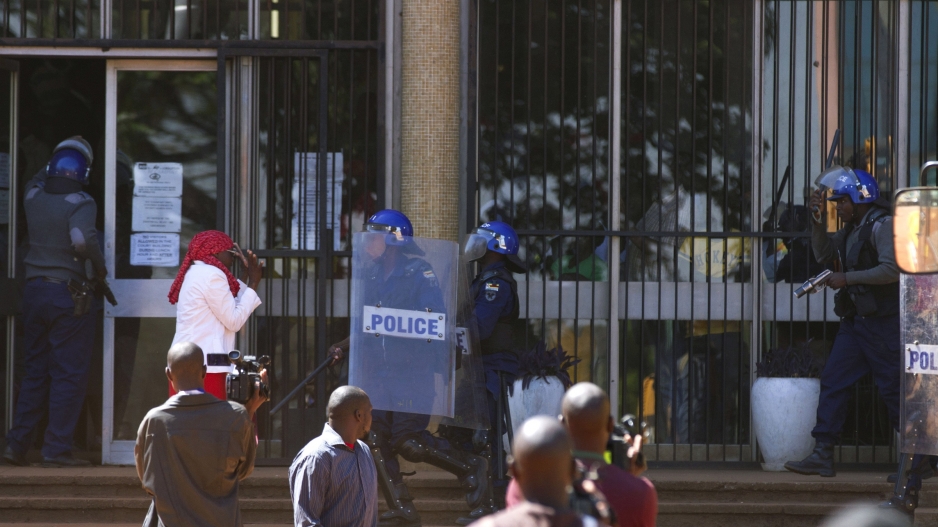 Riot police forces stand guard outside the High Court in Harare on August 26, 2016, during an opposition rally to demand electoral reforms.

Tendai Biti, who is representing the applicants, told African News Agency the postponement was not a bad thing as it was done to allow them to prepare adequately their heads of argument.

“Yes the matter was postponed because the judge felt that this was a very important matter that raised a lot of important issues, so she asked us to prepare our heads of argument. The postponement is not a problem for me at all,” Biti said.

Political parties under the banner of the National Electoral Reform Agenda (NERA), together with other political parties and some residents, are challenging Statutory Instrument (SI) 101 A of 2016, which was gazetted on Friday, banning all demonstrations in Harare. They want the court to suspend the action and stop the police from interfering with citizens’ right as defined in section 59 of the country’s constitution.

READ: Mugabe will be gone by December: Tajamuka

The applicants also want the High Court to order Harare District Chief Superintendent Officer Newbert Saunyama, to continue processing and dealing with all notifications for public gatherings, processions or meetings in the manner lawfully prescribed in Section 12 of the Public Order and Security Act (Chapter 11:17).

Biti said the ban on protests in Harare woulkdl affect NERA’s demonstration scheduled for Friday, 9 September, which will not take place, as it has been affected by the promulgation and imposition of SI 101A of 2016.

He added that the Zimbabwe Republic Police (ZRP) ban of demonstrations in Harare is a serious infringement of citizens’ constitutional rights as defined in Section 59, Section 58 (1), Section 61, Section 62, and Section 67 (2) of the Constitution.

The case is under the spotlight and is being followed closely after President Robert Mugabe at the weekend attacked judges for allowing the NERA demonstration to proceed two weeks ago, saying enough is enough.

The state media last week also attacked the judiciary in three consecutive editions of The Herald and The Sunday Mail.

READ NEXT: &39;I resurrected as I always do&39;: Mugabe on rumours of his death