Zimbabwe rising: Marches planned as Mugabe's future in the balance 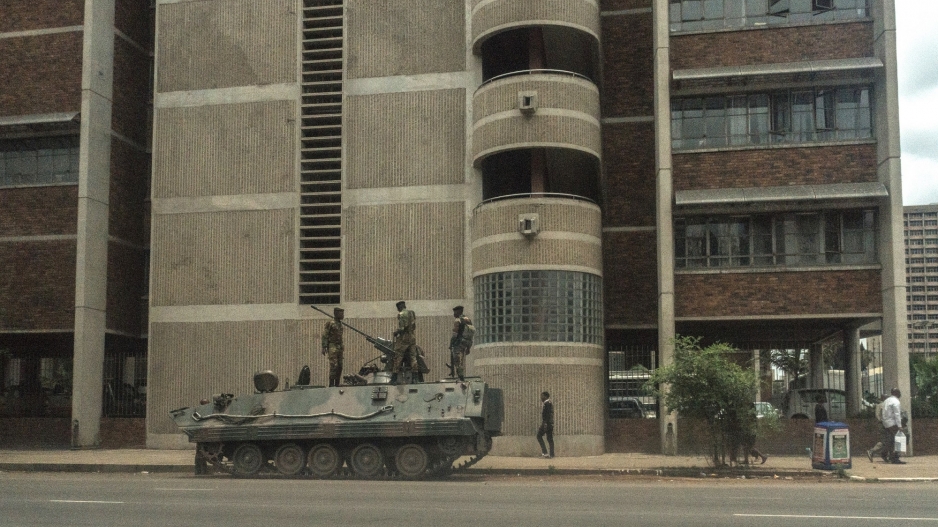 Zimbabwe Army personnel stand atop an armoured personnel carrier in Harare. Zimbabwe was set for more political turmoil on Saturday with protests planned.

HARARE - Zimbabwe was set for more political turmoil on Saturday with protests planned as veterans of the independence war, activists and ruling party leaders called publicly for President Robert Mugabe to be forced from office.

The marches will cap an unprecedented week in which generals seized power and put Mugabe under house arrest in a stunning turnaround for the president who has ruled since 1980.

The 93-year-old autocrat did not resign in talks with the army chief on Thursday and sources suggested the veteran leader was "buying time" to negotiate an end to his 37-year reign.

Mugabe appeared publicly for the first time at a pre-planned graduation ceremony in Harare on Friday, further stoking questions over the status of his discussions with General Constantino Chiwenga, who led the military power grab.

Later in the day, eight of Mugabe&39;s ruling party&39;s 10 regional branches took to state television to call for him to go.

Cornelius Mupereri, a spokesman for ZANU-PF&39;s Midlands region, was one of several party barons to appear on ZBC&39;s nightly news to read almost identical statements calling on Mugabe to quit.

Chris Mutsvangwa, chairman of the independence war veterans&39; association, said "the game is up" for Mugabe and announced street protests against the president.

"It&39;s done, it&39;s finished... The generals have done a fantastic job," he said at a press conference in Harare.

"We want to restore our pride and (Saturday) is the day... we can finish the job which the army started."

They are organising a gathering at a large sports field in a working-class suburb on the outskirts of Harare.

Demonstrators had begun to arrive in the area by midnight local time.

The UK embassy in Harare warned its citizens to avoid another protest -- thought to be a pro-Mugabe counter-demonstration -- expected to take place in Robert Mugabe Square in the centre of the capital.

Other demonstrations are expected elsewhere in the country on Saturday.

Despite appeals for Zimbabweans to turn out in force, it remained unclear whether demonstrators would heed the calls in a country where public protest has previously been violently suppressed.

But a video emerged late on Friday of activists in the second city Bulawayo apparently offering free transport to Harare for residents eager to join Saturday&39;s march.