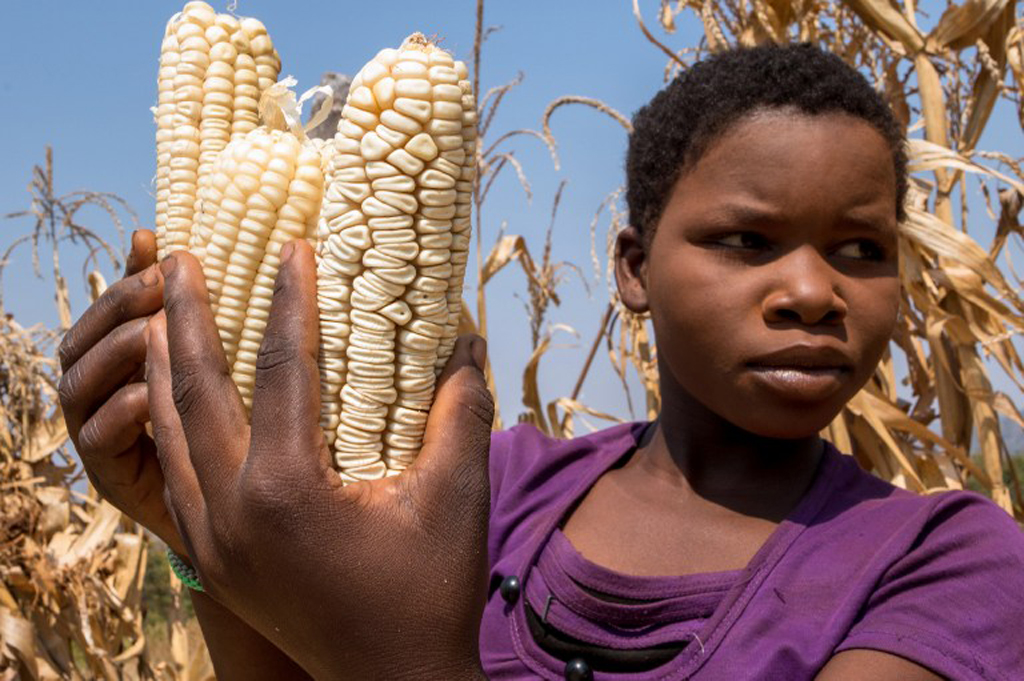 Zimbabwean Vimbiso Chidamba inspects some of the few remaining maize cobs in the family's granary as she gathers cobs in a sack for milling at her village in Musana Bindura on September 2, 2015.

The tool has been designed over the past two years to be used by member states at whatever level of maturity of their systems.

It is based on CODEX principles and Guidelines for National Control Systems, as well as other relevant guidelines to protect the health of consumers and ensure fair practices in trade and covers controls by competent authorities on food safety attributes of food and also essential quality attributes as defined in the food law.

Speaking to journalists in Harare Tuesday, Health and Child Care Permanent Secretary, Gerald Gwinji, said the safety of food was of paramount importance for the country and relevant stakeholders were meeting in the capital to refine the tool.

Gwinji said it was important for government and the various agencies to ensure that food that came into the country and that which was grown in the country was safe for human consumption.

He said this applied to both the plant and animal foods, adding that the assessment process cut across many government ministries and agencies such as the Ministry of Agriculture, the Ministry of Health and Child Care and local authorities.

He said while there were various agents that looked at food safety in the country such as the Zimbabwe Food Safety Advisory Board which fell under his ministry, these were not appropriately coordinated structures.

“So this tool will coordinate all agencies that look into food safety and come up with a tool that looks at the monitoring of food that is distributed to consumers. We import a lot of food and therefore food requires a lot of monitoring, it requires that we go out and inspect the factories where food is manufactured and packaged,” he said.

He said monitoring of all the food distributed in the country was a mammoth task considering that there was also a lot of food that entered the country through undesignated points and found itself on shop shelves without being assessed for compliance with safety standards.

“The food must be appropriately labelled, it must contain whatever is said it contains and it must not contain harmful products. Therefore it is a mammoth task to monitor food and we need a very good structure to allow us to cover all angles as far as food is concerned,” he said, adding that it was the responsibility of all stakeholders to ensure that food that came into the country was not harmful to consumers.

FAO Sub Regional Coordinator and Country Representative David Phiri said his organisation had initiated the programme as part of its role to help member states have effective food control systems.

“After a lot of experience, we have found out that countries sometimes do not know where to start from in terms of food control systems, especially that food safety control systems are a mandate of many players,” he said.

He added” “So sometimes it is very difficult for government to start that system, so FAO and WHO got together and decided that it is time that we develop a tool that can inform all countries in terms of food control systems.”

He said the assessment tool would be used in all countries in the world once completed, adding that Zimbabwe was among the first five countries to test this tool.

He said FAO had specifically picked Zimbabwe because it had local collaboration with the government of Zimbabwe on different projects. Other countries which had already tested the tool kit were Sierra Leone, Zambia, Gambia and Afghanistan.

He said the pilot testing would take several months depending on the synergies between the relevant ministries and agencies.

Phiri said the food that was being distributed in the country so far was safe.

“So no alarm, there is no problem with the food that we eat so far. There have been no reports of serious food poisoning, but there are countries where there has been this problem, that is why the FAO as well as AU has put together this initiative,” he said.