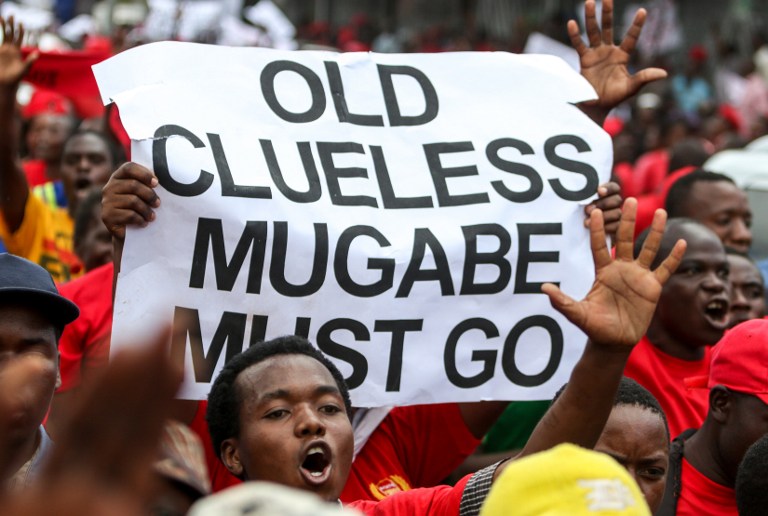 Movement for Democratic Change (MDC) youth supporters hold up a sign during a demonstration by the opposition party in Harare.

HARARE - Zimbabwe&39;s liberation war veterans, who have played a crucial and sometimes violent role in supporting President Robert Mugabe, denounced him as "dictatorial" Thursday in the latest sign of growing national instability.

A surge in recent street protests -- the largest in many years in Zimbabwe -- has been triggered by an economic crisis that has left banks short of cash and the government struggling to pay its workers.

Mugabe (92) has used his security forces to crush dissent since he came to power in 1980 after leading the liberation war in the 1970s that ended British colonial rule.

But a series of rare public demonstrations have revealed deepening anger at the ageing president, who has vowed to stand for re-election in 2018, and the ruling Zanu-PF party.

The Zimbabwe National Liberation War Veterans&39; Association issued a strongly-worded statement in Harare, saying it would no longer support him in elections.

"The Zanu-PF party leadership has dismally failed to... address the economic problems that have beset our great nation," it said.

"We note with concern, shock and utter dismay the entrenchment of dictatorial tendencies, personified by the president and his cohorts which have slowly devoured the values of the liberation struggle."

In February, Zimbabwean police shocked many observers by using water cannon and teargas to prevent a meeting planned by the war veterans to air their grievances against the regime.