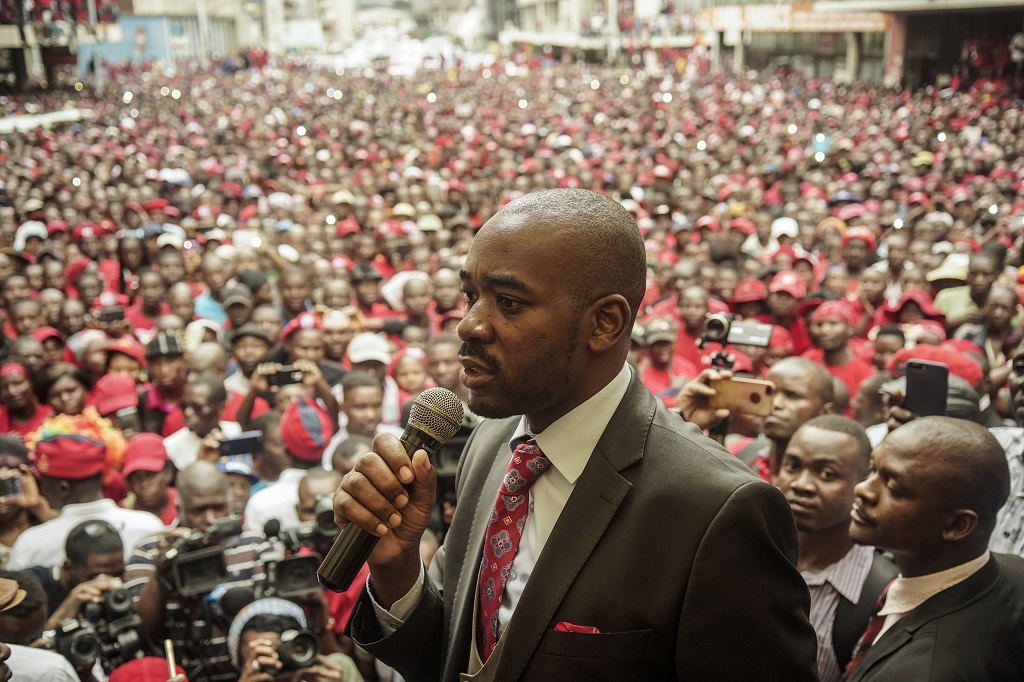 HARARE – Zimbabwe&39;s main opposition leader Nelson Chamisa has vowed to revive the country&39;s moribund economy and introduce a new currency pegged to the South African rand if he is elected next month.

Zimbabwe&39;s economy has been on a downturn for more than a decade, suffering low growth, high unemployment and a severe liquidity crisis that has seen people queue for hours to withdraw limited cash.

"By 2023, we want a double-digit economic growth and a $100-billion (R1.3-billion) economy by 2029," Chamisa told supporters in the capital Harare as he launched the opposition&39;s manifesto for the July 30 election.

The Movement for Democratic Change Alliance said its government would join the rand monetary union, a grouping of southern African countries that use the rand as their currency.

The future is upon us!Pleased to announce the launch of our 2018 New Zimbabwe Blueprint at the Jubilee Center, Milton Park in Harare tomorrow.The NEW has arrived.BeholdTheNew pic.twitter.com/H7WAfKISiV

Becoming a member of the union "will allow Zimbabwe to issue a new Zimbabwean dollar that will be pegged to the rand", it said in the manifesto.

Zimbabwe trashed its fiat currency in 2009 after it was ravaged by hyperinflation, which had peaked at around 500-billion percent, rendering it unusable.

It then adopted a slew of foreign currencies, including the US dollar and the rand, but the dollar was more popular.

A few years later US bank notes started to run short, forcing the government to introduce a token currency – the bond notes – parallel to the dollar but widely distrusted.

Chamisa (40) is squaring off against Emmerson Mnangagwa (75), who succeeded veteran ruler Robert Mugabe following a brief military take over in 2017.

THANK YOU HARARE, WELL DONE ZIMBABWE for the huge turnout for the demo showing that great support to the cause & case for a totally New Zimbabwe.God granting, we shall attain total democracy, true freedom and real change on the 30th of JULY this 2018 Godisinit! pic.twitter.com/h9Zee4QfW9

On Tuesday, thousands of MDC supporters staged street protests in the capital to demand key reforms before the vote.

Global watchdog Human Rights Watch (HRW) on Thursday called on Zimbabwean authorities to ensure conditions were conducive for a free and fair vote.

"President Mnangagwa needs to go beyond mere rhetoric and take genuine steps to level the playing field for all candidates and their parties," said Dewa Mavhinga, HRW&39;s southern Africa director.