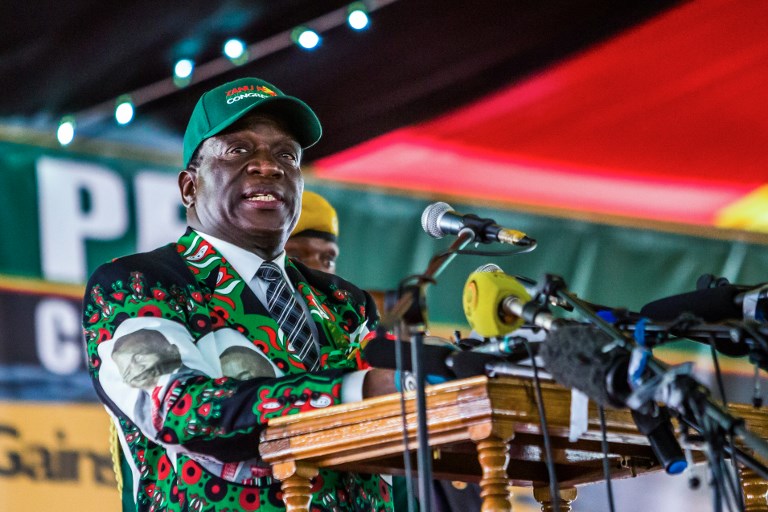 File: Zimbabwe's President Emmerson Mnangagwa speaks during the official opening of the extraordinary conference of the Zimbabwe's ruling ZANU-PF party, in Harare December 15, 2017.

HARARE - Zimbabwe&39;s new president, Emmerson Mnangagwa, drew a firm line under the 37-year reign of Robert Mugabe in a keynote speech to the ruling Zanu-PF party on Friday.

Mnangagwa took office last month after Mugabe was forced to quit when the military took power and Zanu-PF lawmakers launched impeachment proceedings against their veteran leader.

Until recently, the new president was one of Mugabe&39;s closest allies, and critics say he is another authoritarian hardliner.

But Mnangagwa used his much-awaited speech to an extraordinary congress of the Zanu-PF to declare the party had been defiled, and was now on a "new trajectory".

"The party ideology, rules and regulations were being desecrated daily," Mnangagwa, 75, said at the one-day gathering in Harare.

"Clearly this was no longer the Zanu-PF you and I pledged loyalty to. We must never lower our guard again," he said.

Mugabe&39;s final years in power were marked by a bitter inter-party succession battle between Mnangagwa, who was covertly backed by the military, and supporters of Mugabe&39;s wife Grace.

"Party work must not be in the old mould. Now we must be about politics and economics," he said, wearing a jacket decorated in party colours and images of himself.

"We must embrace each other and other nations. This congress must define a new trajectory for the party."

The conference also confirmed Mnangagwa as the party&39;s presidential candidate in next year&39;s general elections and named a military major-general, Engelbert Rugeje, to the secretary-level post of political commissar.

Takavafira Zhou, a political scientist at Masvingo State University, said the appointment of a general to an influential party position was worrying and could pose a threat to the credibility of next year&39;s general elections.

"It confirms our fear that Zanu-PF is being further militarised and this has a negative bearing on the forthcoming elections," Zhou told AFP.

"We are likely to see the army playing a big part in the election in support of Zanu-PF. They will not give power to anyone except their preferred candidate. This will militate against the holding of free and fair elections," he said.

But Mnangagwa vowed that the vote will be "credible, free and fair. There is no need for violence."

David Coltart, a lawyer and opposition politician, said the meeting was "to consolidate President Mnangagwa&39;s position within the party and to ensure that (Grace&39;s supporters) are put firmly in their place."

"Many people see this administration as a thin veneer over a military junta, and the question is whether the veneer is going to get thinner," he added.

Forgiven, but not forgotten

Mnangagwa has been keen to avoid any public sign of friction within Zimbabwe&39;s ruling elite, and he paid tribute both to Mugabe, 93, and the army chief who forced him out.

"I would like to salute the commander of the Zimbabwe Defence Forces General Constantino Chiwenga for standing shoulder to shoulder with fellow Zimbabweans," Mnangagwa said.

He also paid homage to "party comrade Robert Mugabe, who steered the ship of our party and its government."

Mugabe was photographed by AFP walking out of a lift at a hospital in Singapore on Friday, the first time he has been seen since his resignation on 21 November.

Mugabe, who had ruled Zimbabwe from its independence from Britain in 1980, is in increasingly frail health and has reportedly battled prostate cancer.

Many Zimbabweans took to the streets to celebrate the end of Mugabe&39;s long rule, but many have also expressed fears that Mnangagwa could oversee a repressive regime of his own.

Mnangagwa, who is widely referred to as the Crocodile for his ruthlessness, also appeared to reach out to Grace Mugabe&39;s younger supporters, who were known as the G40 (Generation-40) group.

He declared that the "era of factionalism is behind us. We cannot be hostages of past grievances. Let bygones be bygones".

"However those we have forgiven should not think we have forgotten," Mnangagwa warned in his closing address.