After Ethiopia crash, victims’ relatives say they were hounded by US law firms 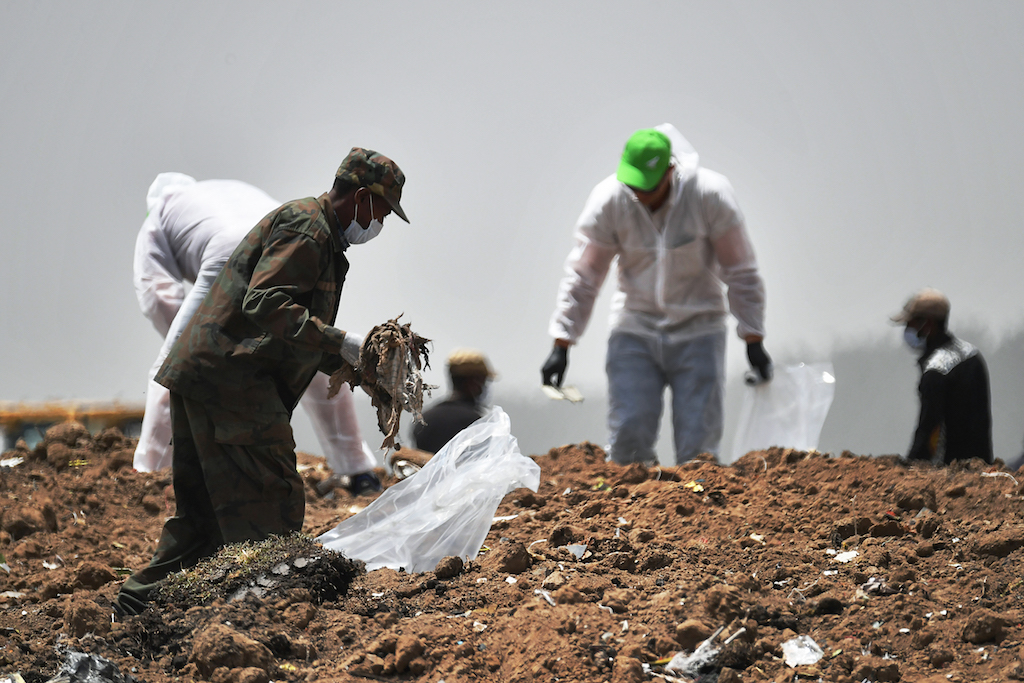 File: Days after the crash of an Ethiopian Airlines’ Boeing jet that killed all 157 people on board, strangers began calling or visiting bereaved families.

NAIROBI - Days after the March 10 crash of a Kenya-bound Ethiopian Airlines’ Boeing jet that killed all 157 people on board, strangers began calling or visiting bereaved families, saying they represented US law firms.

They showed up uninvited at memorials and at homes full of weeping relatives. They cold-called. They left brochures. In one case a grieving husband was offered money for an appointment. One woman offered counselling and another said she was creating an emotional support group, without disclosing they were working for lawyers.

Reuters interviewed 37 relatives of the victims, or their representatives, and found that 31 complained of inappropriate approaches by those saying they represented US law firms.

In some instances, the behaviour may have been illegal or unethical under US laws and rules barring solicitation and deceptive practices, several legal ethics experts said.

Witherspoon, Wheeler and Eaves denied any wrongdoing. Ribbeck, GALG and Ramji did not respond to requests for comment.

Ribbeck Law and GALG have jointly filed two lawsuits against Boeing seeking “all damages available under the law” without being specific about the size of the claims. Three suits filed by Ramji have been dismissed. The other firms haven’t filed any suits.

By Thursday, there were 114 cases filed against Boeing in Chicago federal court on behalf of 112 crash victims, according to lead counsel for the plaintiffs, Robert Clifford. More than three dozen law firms are representing them. No trial date has been set.

Boeing has said it is “cooperating fully with the investigating authorities” and said that safety is its highest priority.

It has acknowledged errors in failing to give pilots more information on 737 MAX software involved in a Lion Air crash that killed 189 in Indonesia in October 2018 and the Ethiopian crash five months later, but Boeing has not admitted any fault in how it developed the aircraft. The 737 MAX is currently grounded.

An uninvited stranger turned up at Paul Njoroge’s family home in Kenya just hours after a memorial service for his wife, his three small children, and his mother-in-law, who all died in the crash.

Njoroge said the visitor gave him promotional materials for the law firm Wheeler and Franks.

"I said, I don't know who directed you to this place. Everyone here is praying," Njoroge told Reuters.

Two other families said they received visits around the time of memorial services from Wheeler’s lawyers or people who said they represented the firm.

James Ndeda, who Wheeler represented after he was injured in the 1998 embassy bombing in Kenya, said he visited Njoroge. The firm’s partners, Bill Wheeler and Jamie Franks, asked Ndeda to help the firm connect with crash victims’ families, Ndeda said. Wheeler sent him literature featuring his firm and another Mississippi firm, Eaves Law Firm.

Ndeda said he went to visit victims’ families either by himself, sent employees or accompanied Bill Wheeler or Jamie Franks, and sometimes Leo Jackson, an investigator with Eaves. Jackson declined to comment.

Wheeler and Franks, and Eaves, said in a joint emailed statement they only met families if invited. "The story you have been told is completely wrong," they wrote. "We contacted no families without an invitation."

They declined to answer further questions.

Ethiopian Bayihe Demissie, whose flight attendant wife Elsabet was a victim, told Reuters a man who said he was from The Witherspoon Law Group called him three days after the crash. Bayihe said he was too upset to speak.

People saying they represented more than 30 firms contacted him over the next few months, including Witherspoon again, and GALG, said Bayihe. The constant calls about compensation hurt because it felt like people were suggesting he could benefit from his wife’s death, he said.

"This firm does not solicit or engage in any illegal practices. We do not represent any of the families involved in the tragic crash," Witherspoon’s founder Nuru Witherspoon said in an email.

A woman named Mihret Girma sent a Kenyan victim’s family a message in August, inviting them to attend a meeting with a grief counsellor and the Law Society of Kenya.

At that time, she did not reveal she had ties to the firms GALG and Ribbeck, according to the family, who shared messages received from Mihret.

Mihret was in a WhatsApp group with GALG staff and US lawyers Manuel Ribbeck and Monica Ribbeck Kelly within three weeks of the March crash, other messages reviewed by Reuters show. Dozens of the messages show GALG staff and the Ribbecks discussing how to reach bereaved families.

Mihret did not return calls or messages seeking comment.

The Illinois state disciplinary commission censured Monica Ribbeck in 2014 for filing an aviation accident suit on behalf of someone who had already terminated her.

In 2015, the commission’s hearing board recommended she be suspended for 60 days for filing what it alleged was a frivolous action for legal discovery over the disappearance of Malaysian Airlines’ Flight 370. That was overturned after a review.

This year, the Ribbecks set up a new entity, GALG, according to messages between GALG and the Ribbecks that have been viewed by Reuters. GALG staff directed clients to the Ribbecks, messages and emails shared by several bereaved families show.

GALG set up its website on March 28, only 18 days after the accident, and filed its articles of incorporation in Illinois on April 24.

Amos Mbicha, whose sister and nephew died in the crash, said he helped more than ten law firms, including GALG, connect with bereaved families. He said he stopped working with GALG in October when the firm tried to contact a victim’s relative after he had warned them not to.

Neither Ribbeck nor GALG responded to requests for comment. Monica Ribbeck did not return multiple email and phone messages from Reuters.

While many families interviewed by Reuters say they turned away cold callers, they typically wound up retaining lawyers after doing their own research.

"Not all the lawyers are bad. If we say that, Boeing wins. We needed to find someone to get justice,” said Tom Kabau, a Kenyan lawyer who lost his younger brother George in the crash and whose family has hired Husain Law and Associates and Wisner Law Firm.

Lawyers representing victims of airline crashes can get millions of dollars in fees if they win or settle cases in US courts, where there can be large payouts.

Awards against an airline are capped if it was not negligent. But there is no limit for manufacturers, making lawsuits against Boeing potentially lucrative.

Plaintiffs' lawyers in these kinds of cases don't usually charge fees upfront but take at least 20 percent of any settlement or award. That standard practice is being followed in the Ethiopian crash cases, bereaved families say.

Beyond the aggressive approaches by certain firms, in Ethiopia, one lawyer offered to pay for access.

Adam Ramji of Texas-based Ramji Law Group sent Bayihe six messages in 20 minutes on July 13, and offered cash in exchange for a meeting, according to Bayihe and a review of his text messages.

Bayihe has since filed a suit through Chicago-based Clifford Law Offices, telling Reuters he deliberately sought out a lawyer who had not pitched to him.

Ramji filed three lawsuits in Chicago. A judge threw out two of them after the families concerned said the names of the “executors” of the estate who were named as the lawsuits’ plaintiffs were unknown to them. A third suit was dismissed because there was no person by that name aboard the flight.

US states have ethics rules that prohibit lawyers or anyone acting on their behalf from soliciting business by phone or in person, in most cases over any time period.

They also bar lawyers from giving anything of value to solicit a prospective client.

There is also a US federal law that forbids lawyers from contacting victims' families within 45 days but it appears to be only applicable to US aviation accidents, according to two legal experts.

Contacted about the cases cited in this story, Robert Glen Waddle, director and counsel at the Mississippi Bar’s Consumer Assistance Program, declined comment. Steven Splitt, spokesman at the disciplinary commission of the Illinois bar, and a spokeswoman for the Texas disciplinary board, also declined to comment.

“There are so many shadows in which people can act, especially abroad,” said Grogan.