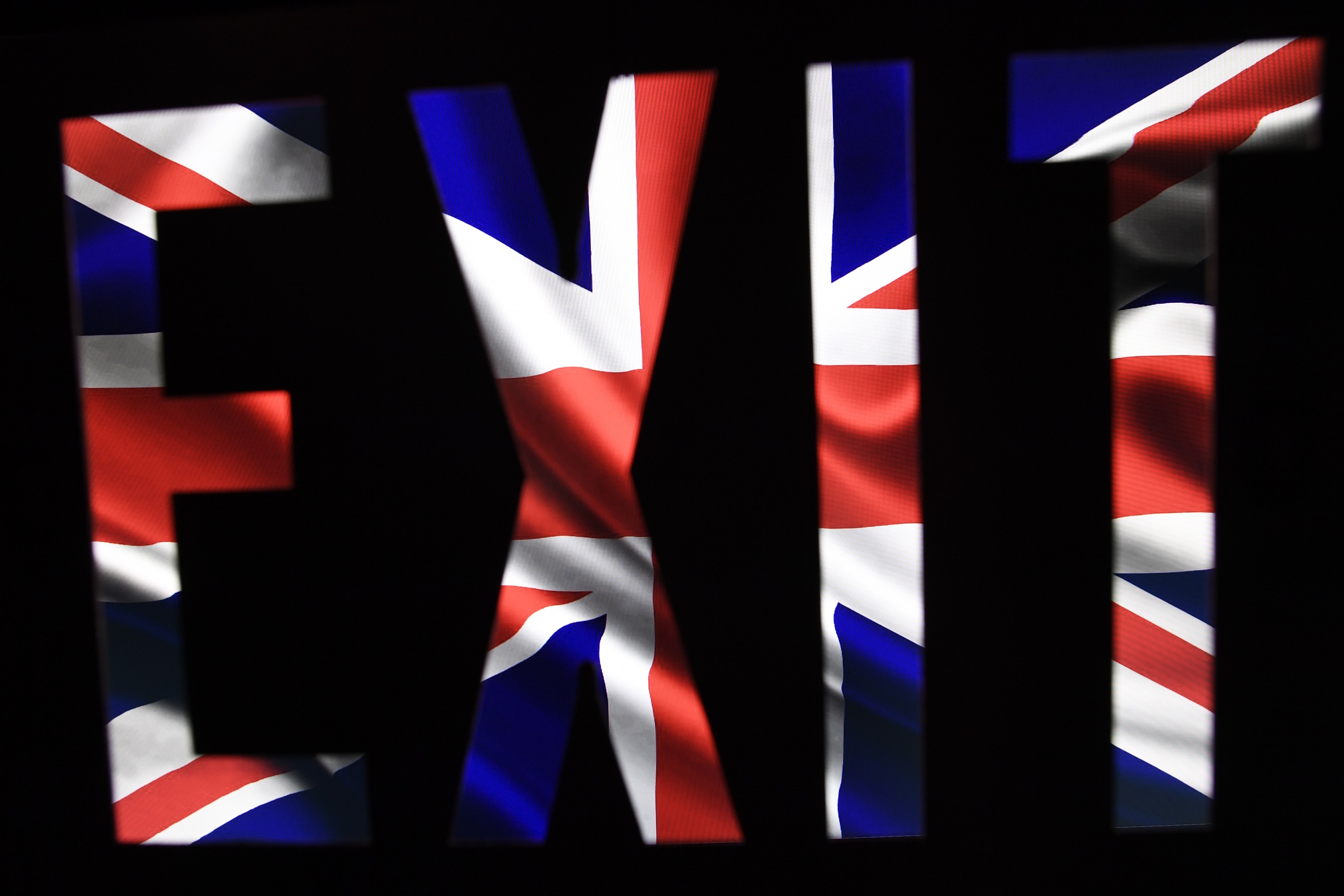 File: A screen grab shows the British flag with an exit sign superimposed on October 19, 2016 in Paris.

SLOUGH, United Kingdom - As record numbers of Britons are forced to use food banks and homelessness soars, for many people rampant poverty, not Brexit, is the main issue in next week's general election.

"Without these people, we wouldn't be able to eat so... people like us couldn't really exist," he told AFP at a food bank operating out of a Baptist church near a sex shop.

Anti-hunger campaigners the Trussell Trust, which runs the facility and more than 1,200 food banks like it, handed out a record 823,145 emergency parcels -- which each comprise food for three days -- in the six months to September.

That was the busiest half-year since the organisation was created in 1997 and marked a 23-percent surge from the same period of 2018.

In Slough, a large industrial town of 162,000 people best known in recent years as the drab setting for comedian Ricky Gervais' cult comedy "The Office", the increase was 29 percent.

The jump in demand was partly from the working poor struggling to make ends meet.

But more than a decade after the global financial crisis that sparked a vicious worldwide recession, many cities, towns and villages across Britain have yet to recover from harsh austerity.

"Slough is in such a bad state," said John, who declined to give his real name.

"What I find ridiculous is no (politician) is speaking about the main issues which (are) mental health and poverty and drugs addiction ... within communities that are receiving less money."

Austerity-driven changes to the welfare system have hit the poorest the hardest over the last decade, campaigners argue.

Those concerns were amplified a year ago when the United Nations accused the British government of being in a "state of denial" about a growing rich-poor divide.

Since the financial crisis, the government implemented across-the-board cuts and spending freezes.

There were also attempts to restructure the Universal Credit welfare payments system to encourage people to work.

The programme is deeply unpopular because claimants must wait five weeks for their first payment, which can push the poorest into more debt and poverty, food bank volunteers say.

The independent Social Metrics Commission estimates there are 14.3 million Britons in poverty or just over one in five of the population. About 4.6 million of those are children.

The SMC adds however that the poverty rate held between 21 and 25 percent since early 2000, under governments of all political colours.

"Household income has been affected by welfare changes, rises in the cost of living and in particular, rents," added Judith Cavanagh, coordinator at charity coalition End Child Poverty.

"This is why two-thirds of children in poverty now come from a working household. Families are finding that they have to cut back on essentials like food, heating and clothing."

Meanwhile, homelessness is soaring and accounts for one fifth of food bank usage.

Increasingly, many homeless people are in work yet unable to afford housing.

"Homelessness is the most extreme expression of poverty," said Jasmine Basran, policy and public affairs manager at charity Crisis UK.

"We know people are pushed into homelessness when they cannot afford to cover the cost of basic essentials -- their rent, their food, their bills."

There were 171,000 homeless families and individuals sleeping on streets, in cars, buses or emergency accommodation, a 2017 study from Crisis UK indicated.

Similarly it wants an end to food banks, which, while currently playing a "critical role", should not be necessary.

"People should be receiving the support they need to be able to live and thrive," said Basran.

Access to food banks is granted via referrals from care professionals like doctors and social workers, who issue vouchers.

Back in Slough, John, who lives in temporary accommodation after being homeless, remains unconvinced the election will change anything for the poor.

"I think all politics is bullshit and they need to have someone who is a bit more realistic and lived on the streets of London, on the poverty side," he said.

"They need someone like that in charge. Only someone that has come through the gutter would know what it's like."