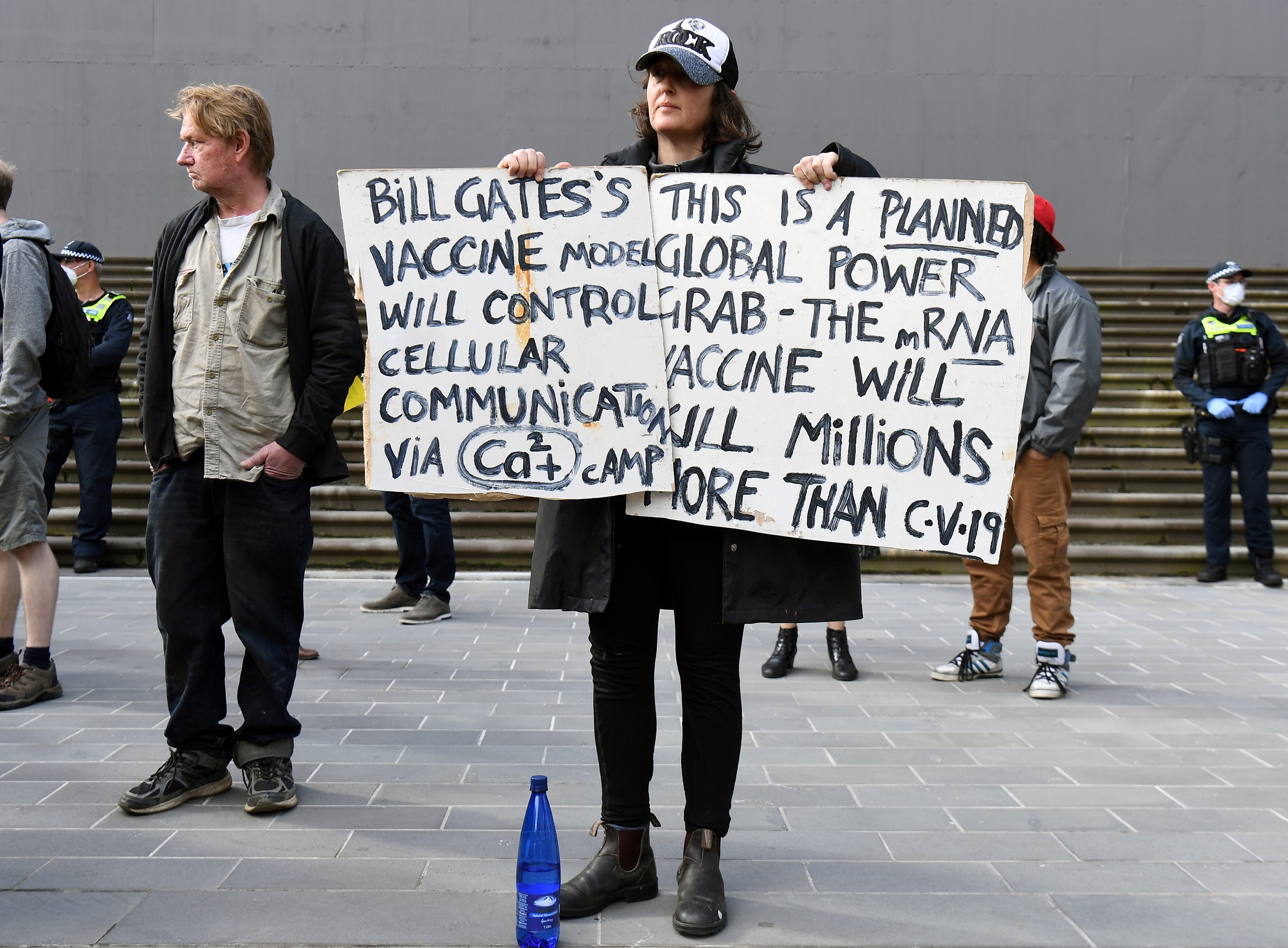 A protesters holds placards on the steps of Victoria's state parliament in Melbourne to protest the state's tough lockdown laws as well as 5G, vaccinations and coronavirus being a hoax.

JOHANNESBURG - As the novel coronavirus wreaks global havoc, Bill Gates is the new bete noire for conspiracy theorists worldwide including in Africa where a Kenyan politician's false online post has added major fuel to the spread of misinformation.

While Gates's vaccine programmes on the continent have long provided ample fodder for speculation, the bogus claims have gained new traction amid the pandemic.

On 15 March, Nairobi governor Mike Sonko published an old video of Gates warning about the consequences of a future pandemic, with the caption "Bill Gates told us about the corona virus 2015 (sic)".

While the clip shows the philanthropist telling an audience that the world was unprepared for global outbreaks in his TED talk five years ago, he made no mention of the coronavirus.

Sonko's post generated so many interactions among his two-million plus Facebook followers that it remains the most prolific global post about Gates in the COVID-19 era, according to social media analysis tool CrowdTangle.

So far, it has been shared more than one million times and has garnered 38 million views on social media.

The post highlights the role played by local public figures in spreading false or misleading claims in different parts of the world, according to the Washington-based Atlantic Council's Digital Forensic Research Lab (DFRLab), which studies disinformation globally.

"They typically travel beyond... niche communities when an influencer, such as a prominent celebrity, or even mainstream media source, amplifies them," DFRLab's Zarine Kharazian told AFP.

"Once they've achieved this level of spread, they migrate across languages."

Rumours about links between Gates and the current pandemic have enjoyed particularly broad appeal among different conspiracy communities worldwide since the virus erupted in the Chinese city of Wuhan in December 2019.

"One commonality of conspiracy theories that seems to span borders, languages, and cultures is a mistrust in 'all-powerful elites' and institutions," Kharazian said.

"Gates's prominent profile, outspokenness and active engagement in international public health work has made him a prime target for this particular strain of conspiracy."

Among the most popular claims in Africa is the idea that Gates wants to control mankind with the use of microchip implants or digital tattoos.

Conspiracy theorists have also alleged that Gates stands to profit handsomely from an eventual vaccine and that his foundation patented a treatment years ago before unleashing the novel coronavirus.

Others again believe he created the virus for population control --  a sensitive point in Africa where much of the visible push-back online has focused on the issue of a COVID-19 vaccine and experimental trials on local test subjects.

"Over the last few decades, there have been various incidents of medical research conducted in Africa which have involved gross human rights abuses," she told AFP.

They range from forced sterilisation experiments carried out in Namibia when it was part of Germany's colonies in the late 1800s, to controversial drug trials conducted by Western pharmaceutical giants in various African nations in the 1990s.

READ: Half of Canadians fooled by COVID-19 conspiracy theories​​​​​​​

The distrust of Western vaccines was evidenced by a recent viral post, which claimed that French maverick scientist Didier Raoult had warned Africans against using "the Bill Gates vaccine" because it contained "poison".

AFP Fact Check debunked the claim -- Raoult never made the comments and a vaccine does not yet exist.

But it struck a chord: the French version of the post was shared more than 47,000 times before it was taken down.

Fani-Kayode, who has a strong following among Christians from southern Nigeria, has shared multiple posts claiming Gates was part of a secretive power elite, which wanted to achieve world domination using the coronavirus and 5G technology among other things.

As the virus numbers and rumours spiralled, agencies like the World Health Organization (WHO) raced to stem the spread of misinformation by running online campaigns and helping governments to set up dedicated web portals.

The WHO also held a workshop with more than 50 journalists in Nigeria in February.

"Journalists and media are critical to getting the right messages to the community," emergency officer Dhamari Naidoo said.

"We want you to transmit the right information to the people, and to contribute in stopping the spread of rumours."