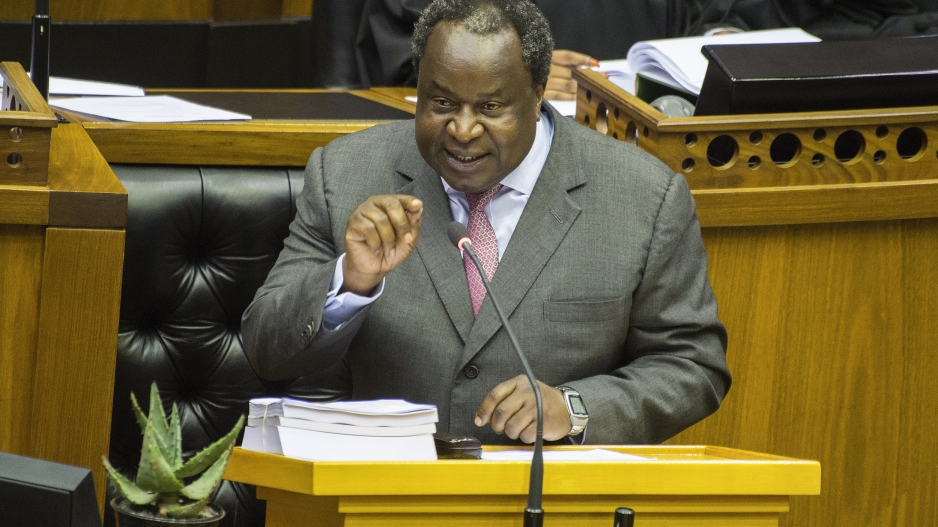 File The current budget proposals show that the government is hamstrung by the country’s fiscal and economic situation.

At the core of this year’s budget proposals from South Africa’s national treasury is the admission that national debt is no longer expected to stabilise. In previous years, bar one brief exception, budgets and medium-term budgets repeatedly promised that debt would stabilise even as previous years’ promises were broken.

The reasons are, however, not new. There’s the low economic growth rate, 0.9 percent for the current year. There are shortfalls in tax collection, R63-billion in the current year. Then there is higher-than-planned spending on state-owned enterprises. As a result, the ratio of national debt to the size of the economy is expected to exceed 70 percent in 2022/23. Five years ago, former finance minister Nhlanhla Nene promised it would not exceed 50 percent.

Debt service costs are now approximately 15 percent of government spending and the fastest-growing spending item. This is up from 10 percent in 2014/15.

Population growth is estimated to be 1.4 percent a year, meaning that economic output per person is declining. In that sense, South Africans are getting poorer. The most notable state-owned enterprises are Eskom (the power utility) and South African Airways. Eskom has been allocated an enormous R112-billion over the next three fiscal years. The national airline will get a minimum of R16.4-billion. The spending on both entities is R60-billion higher than previously planned.

Treasury proposes to offset the revenue shortfall and expenditure increase through a R160.2-billion reduction of the public sector wage bill. The cuts are intended to run across national and provincial governments as well as public entities. It is acknowledged in the bowels of the treasury’s documents that the cuts in the wage bill “will inevitably have negative consequences for the economy and social services”. Reducing the wage bill will also hit tax revenue collection.

Unlike previous years, no tax increases are proposed.

Meanwhile, at the policy level, the proposals suggest “structural reforms”. These are needed to increase economic growth, without which only more pain will follow in subsequent years. But these aren’t adequately substantiated in relation to South Africa’s current economic situation.

The country’s public finances and economy have avoided the rapid downward spiral that would have resulted had the state capture faction of the majority party taken power in 2018. Nevertheless, the current budget proposals show that the government is hamstrung by the country’s fiscal and economic situation. And that it’s distressingly short of ideas to get out of it.

Reducing wages is preferable to reducing public service employment at a time when unemployment rates are even higher than their usual extremes. In past years, the treasury reduced public service posts by stealth. It capped provincial expenditure baselines, forcing provinces to cut staff numbers. Employee costs are the largest cost item in providing health and education services. Treasury had proposed to reduce the wage bill through an early retirement programme. This always seemed overly optimistic and potentially counterproductive if it led to the best public servants leaving. It has not yielded the desired spending reductions.

But looking at the new budget proposals together, they amount to the treasury wanting public servants to pay for Eskom bailouts directly from their current and future salaries. The proposal of various trade unions to use worker pensions to relieve Eskom’s debt burden appears to have been disregarded. In the place of that seemingly sincere initiative, the treasury has opted to play a game of brinkmanship. Its proposal on a wage reduction was formally put to unions only the day before it was tabled. The lateness is evident in the fact that the details of the proposal were not even reflected in the detailed expenditure plans across spheres of government.

Not only does this proposal imply immediate pain for workers and the economy, but it also serves to undermine the role of workers and unions in deciding the restructuring and future trajectory of state-owned enterprises. Given the desire to use Eskom’s crisis and the country’s fiscal situation to push various vested and ideological agendas, this seems unlikely to be coincidental.

Nor do the budget documents explain why it’s equitable to get funds for Eskom bailouts only from public sector workers rather than the private sector or general consumers of electricity. The result may be to sabotage any prospect of a much-needed social compact between government, labour and business on Eskom and public finances. That could also end up undermining the credibility of the budget itself.

The vacuousness of ‘structural reform’

What stands out from the budget is how little of substance the treasury and the minister of finance have to put on the table in the way of feasible solutions.

Economic growth is rightly cited as the critical issue. Within that, “adequate electricity supply” is a priority. Yet the treasury continues to rest heavily on rhetoric about private sector participation in the generation of electricity without providing even the most basic information.

In particular, what’s missing is an estimate of the impact of increased private sector energy generation on Eskom’s revenue and finances. Since Eskom is the main expenditure pressure and risk, this is a remarkable omission.

The monster in the room remains Eskom’s debt. It is now a matter verging on a national disgrace that a feasible consensus plan has still not been tabled to address it.

But Eskom is not an isolated case. There are other examples of the failure of the government to act decisively and convincingly when necessary. One of the best examples of state failure on policy and public finances is the Road Accident Fund. Its accumulated liabilities have been accelerating dramatically in recent years. It was obvious that a rapid, decisive intervention was required. Yet that still has not happened. In the interim, the fund’s liabilities have risen from R180-billion in 2016/17 to a projected R593-billion in 2022/23.

Other than the failure to table a convincing plan for Eskom, the treasury repeatedly refers to “structural reforms”. This is facile, recycled rhetoric, a smokescreen for recycled economic policy proposals.

To the extent that there is any substance to the treasury’s version, it emphasises the regulation of various sectors of the economy. Yet its proposals are outdated and dubious. They are also inadequately substantiated and contradicted by the available evidence.

Read more: South Africa is planning more regulators: this is a bad idea

For example, the failed regulatory structure in electricity has contributed, and continues to contribute, to the Eskom crisis. Treasury, however, wants to replicate that model in transport and water. This isn’t the “evidence-based policy” and a “learning developmental state” that the minister of finance and various economic advisors continually pontificate about. Rather it’s the transplanting of ideas of past eras that are pushed by ideological and vested interests.

It is almost two years since Cyril Ramaphosa took over as president of the country and evidence is mounting that the parts of the state being relied on to steer the country out of a potential fiscal and economic crisis – the national treasury and the presidency – lack the intellectual capacity or political savvy required.