Coronavirus: Who is most at risk of dying? 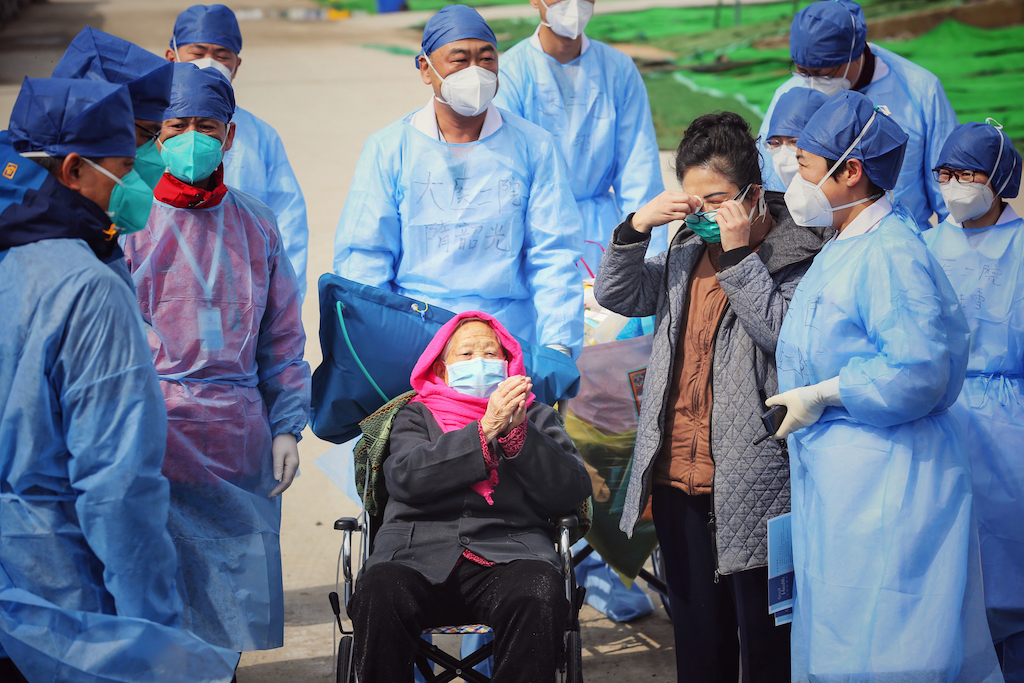 A recovered patient (98) is discharged from Leishenshan Hospital, the makeshift hospital for the COVID-19 coronavirus patients, in Wuhan.

PARIS - As the number of confirmed coronavirus cases across 61 countries hit 86,000 with nearly 3,000 deaths to date, the profile of those most at risk of dying is coming into focus, experts told AFP.

But the overall mortality rate remains uncertain, they said.

The World Health Organization raised its global risk assessment to its top level on Friday, with the global health crisis edging closer to a pandemic.

Among those infected with the virus, older adults with preexisting heart conditions or hypertension face a sharply higher risk, according to preliminary statistics, including from a study covering more than 72,000 patients in China.

Among a subset of 44,700 infections confirmed through lab tests as of mid-February, more than 80 percent were at least 60 years old, with half over 70, said the study, that was published in the official China CDC Weekly.

Initial reports from outside China are similar, with the first 12 victims reported in Italy mostly in their 80s, and none under 60. Several had known heart problems.

Men in the China study were more likely to die than women by a margin of almost 3-to-2.

But whether that was due to behaviour -- notably that most men in China smoke, while few women do -- or biological factors, such as hormonal differences, is still unknown.

READ: Trump calls for calm as first coronavirus death on US soil confirmed

One striking finding from the China study is the near absence of cases among children.

The 10-19 age bracket comprised one percent of infections, and a single death. Children under 10 made up less than one percent, with no deaths reported.

"We are still trying to wrap our heads around the deficit of cases among those under 20," Cecile Viboud, an epidemiologist at the US National Institute of Health's Fogarty International Centre, told AFP in an interview.

"Is it because young children are less susceptible than adults, and thus simply don't get infected? Or if they do, that they have less disease?"

It is surprising infections of very young people are so low, she added, because they tend to be among the hardest hit by almost all respiratory infections -- whether viral or bacterial.

David Fisman, an epidemiologist at the University of Toronto, was also mystified.

"Where are the infected children???," he wrote in an email. "This is critical -- perhaps kids are not being tested because they have mild symptoms."

Another possible explanation is that children in China were out of school for the lunar new year holiday when the virus began to spread widely in January.

"But young children still live in households where they can be infected by their parents," Viboud noted.

EXPLAINER: How long can coronavirus survive on surfaces?

A lower rate of infection among the youngest age groups was also seen during the 2002-03 outbreak of SARS, but was less marked.

SARS, which is also a coronavirus, broke out in Guangdong Province and killed 774 people out of 8,096 infected.

The death of 34-year old Wuhan doctor Li Wenliang in early February, along with several more health workers in their twenties sparked speculation they had died because of repeated exposure, or even sheer exhaustion.

Li's death sparked outrage in China because he had been muzzled by authorities for calling attention to the virus.

Cellphone video images on social networks showed nurses and doctors, unable to cope with the caseload, breaking down in hysterics.

"A more likely reason why young clinicians are getting infected is because they were operating outside their level of expertise and training," John Nichols, a professor in the department of pathology at the University of Hong Kong, told AFP.

"It is noble that the junior doctors pony up valiantly to help, but they most likely would not have had the necessary training in handling infectious patients."

The larger question of just how lethal COVID-19 is, remains unanswered.

The ratio of confirmed cases to deaths suggests a mortality rate of 3.4 percent, but several studies have concluded that up to two-thirds of infections in China and elsewhere have gone undetected, which would make the virus far less deadly.

"At the moment, we don't have a good understanding of the real mortality rate," Sharon Lewin, director of the Doherty Institute for Infection and Immunity at the University of Melbourne told Australian television.

"It is estimated at about two percent."

With SARS -- which killed nearly one in 10 patients -- early mortality figures turned out to be underestimates, in part because victims of the virus did not die quickly.

With the 2009 H1N1 influenza pandemic, however, the opposite happened, said Viboud.

"Within a few weeks of the outbreak, the mortality estimate declined first 10-fold, and then 100-fold, as we moved from severe pneumonia to getting all flu cases."

"Here, I think we are somewhere in the middle," she added, saying the current two percent mortality estimate could well decline.

The seasonal flu has an average mortality rate of about 0.1 percent but is highly infectious, with up to 400,000 people worldwide dying from it each year.

The China CDC study showed that COVID-19 was "mild" for more than 80 percent of confirmed cases.