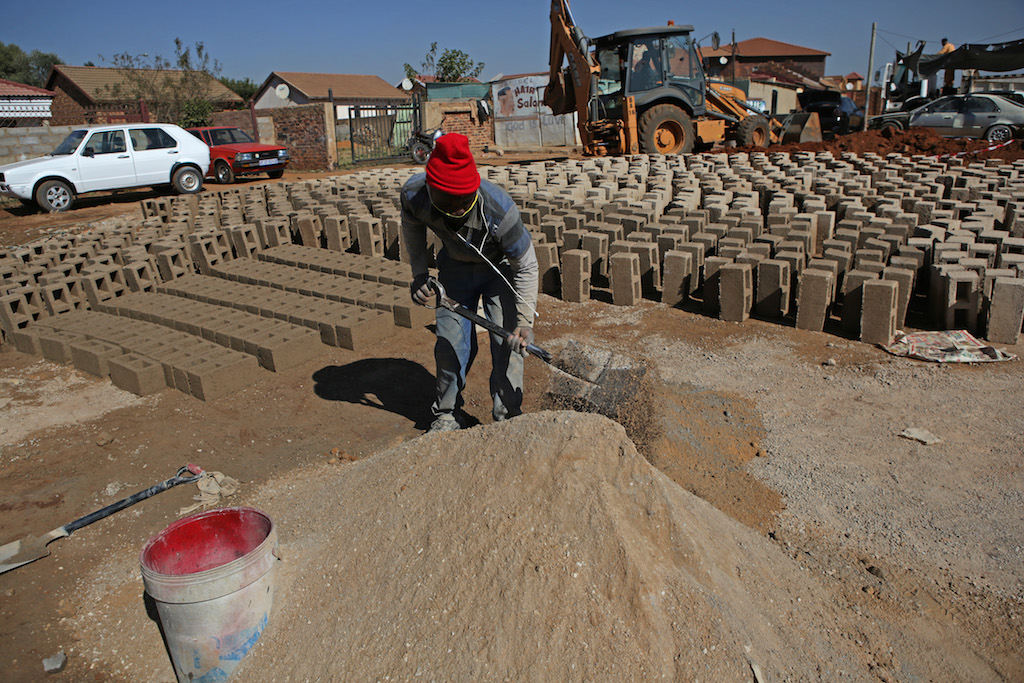 An informal brick maker makes bricks on the side of the road at the Mamelodi township in Pretoria on June 1, 2020.

JOHANNESBURG - Over three years, Isaac Mbatha grew accustomed to the suffocating summer heat and icy winter drafts that pierced the canvas walls of his tent in Wilgespruit, a township on a hilly outskirt of Johannesburg.

He also came to terms with the lack of space, running water and electricity in the makeshift home he shared with his wife and three children.

But he never got used to the rain.

"When it's raining you can't even sleep," said the 38-year-old, recalling the deafening sound of water splattering against the flimsy sheets and the constant fear of flooding. "Life is very difficult if you don't have a roof over your head."

Thanks to the pandemic, 70 Wilgespruit families have been relocated to wooden cottages nearby - free of charge.

"No more rain inside your home, no more cold in the morning," Mbatha exclaimed.

"Our life will be better now."

Wilgespruit is one of South Africa's 2,700 so-called informal settlements.

A section of it known as Plot 323 came into being in 2017, when hundreds of squatters were evicted from a nearby property where they had been living in shacks for over a decade.

Thrown onto the streets, they were allowed to settle on the government-owned Wilgespruit hill - its name in Afrikaans means "stream of the weeping willow" - living in donated khaki tents.

Most scrap a meagre living from informal recycling of plastics.

Such bubbles of extreme poverty are a legacy of the apartheid regime, whereby black South Africans were stripped of land ownership and moved to subpar neighbourhoods away from inner-city areas.

More than a million families continue to live in these informal settlements more than 25 years after the end of white-majority rule.

The townships, usually only remembered by politicians when its election season, were dragged back to the government's attention by the coronavirus outbreak.

Amid fears that overcrowding and squalor would hinder efforts to stem the disease, authorities rushed to boost access to sanitation and relocate the poorest.

"For corona, the government gave us sanitiser (and) toilets," said another resident 34-year-old Rebecca Jane.

"But we don't have water and there are several families living in one tent," she added. It's "not safe."

"Plot 323" was the first on a government-compiled list of dozens of settlements in South Africa to be urgently "de-densified".

READ: Over 300 people resettled in Ikemeleng

She rebutted dryly against anyone who asked why the resettlement had taken so long.

"We didn't know about their terrible conditions," Sisulu told AFP.

"The most important thing is (that) when we were aware of it, in less than a month we were able to solve it ... and we will continue to do it because we are a caring government."

"These people had been put by what I would call an uncaring government into these tents and forgotten about," blasted Geoffrey Makhubo, mayor of Johannesburg.

Makhubo, who took office in December, was making reference to his predecessor Herman Mashaba.

Wilgespruit was not "created over the last three years - those people were living for 24 years in shacks before they were evicted," rebutted DA ward councillor Leah Knott.

"It's just a political stunt." Knott condemned the new resettlement as "completely illegal" and problematic for "residents" from surrounding areas, most of whom are white.

READ: Level 3: Evictions prohibited but may be granted by court

He shrugged and gave an ironic smile in gratitude for the pandemic.

"Without this virus we would have stayed in those tents," Sekokotle said.

"But we don't want to celebrate yet," he cautioned.

"We will do it when ... all the dwellers are inside brick and mortar houses."

'Struggling to get own land'

"Previous efforts from the government to de-densify informal settlements were regarded as a failure," warned Chauke.

"What the government terms as temporary resettlement areas ended up being permanent sites."

While de-densification was a "good thing in principle", according to Chauke, it was also reminiscent of forced removals under apartheid.

"The most immediate crisis poor communities are facing now is food security, and with these efforts of de-densification there is less money available out there to make sure that these households are food secure," she said.

READ: On lockdown? What this means for tenants and landlords

As a chilly winter descended on Johannesburg, Mbatha was still grateful for the new roof over their heads.

"At least we are now staying in warm houses," he said.

"We thank the government for that."

Gazing out at the now dismantled tents, Mbatha was already dreaming of converting the space into a soccer field, a recycling station and a vegetable garden.

But his future remained uncertain.

"We don't know how long we will be able to stay there," Mbatha worried.

"We are still struggling to get our own land."

"It changes your life if you know that you're living on your own land," he added.

"(Then) I can build my own house if I want and my kids will know where they are from."