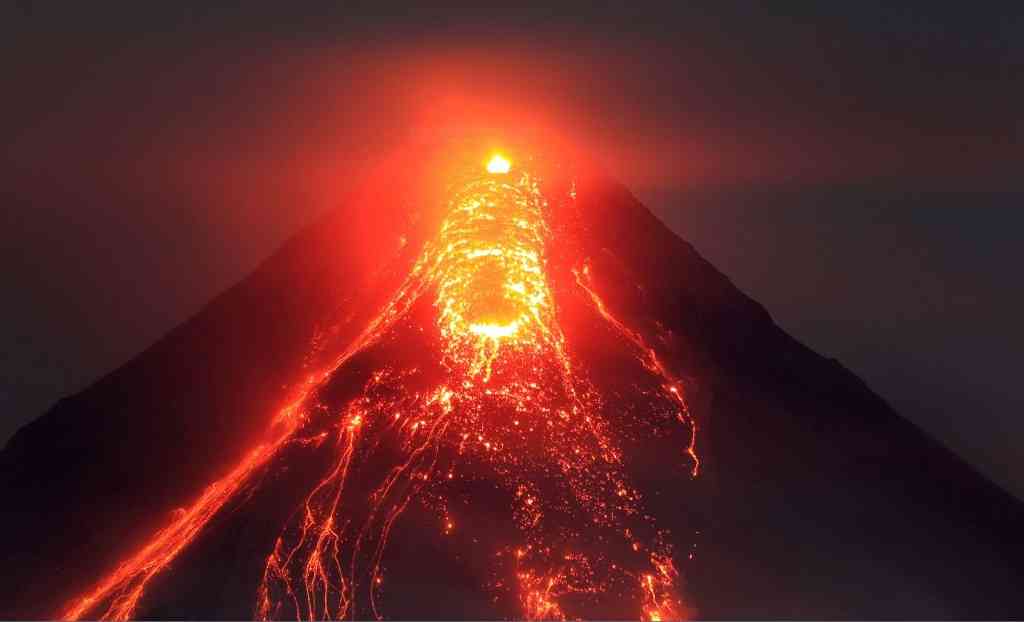 File: Lava flows from the crater of Mount Mayon volcano during a new eruption in 2018.

MANILA - The eruption of a volcano near the Philippine capital has delivered a dazzling but highly dangerous spectacle since it began spewing superheated steam on Sunday.

Taal volcano's bursts of lightning and monster clouds of ash have drawn crowds of gaping observers, but also prompted thousands to flee from its fury.

Here are five facts about the mix of beauty and terror that volcanoes produce:

Large eruptions sometimes put on a stunning display of lightning strikes that illuminate the massive cloud of ash surrounding them.

This has happened repeatedly above the Taal volcano and been captured in videos shared widely across social media.

It is a relatively unusual and difficult to study the phenomenon, so there is some scientific dispute about how and why it happens.

One theory posits that particles bashed together in the chaos of the eruption create static electricity which eventually results in lightning.

However, Indriati Retno Palupi, a volcanologist and geologist, told AFP lightning can be created when ashes containing chemical elements react with gasses in the surrounding air.

A violent eruption could trigger a deadly rush of waves by displacing water with rising magma or an avalanche of debris, according to the Philippine Institute of Volcanology and Seismology (Phivolcs).

In fact, the 1980 eruption of Mount St. Helens in the US state of Washington produced a 780-foot (235-metre) tsunami, according to the International Tsunami Information Center.

The wall of water was unleashed by the partial collapse of the volcano's flank and a fast-moving avalanche of debris.

Around 1,500 potentially active volcanoes are present around the world, many of which are found on the Pacific "Ring of Fire", where tectonic plates collide deep below the earth's surface.

However, around 75 percent of volcanic activity on Earth occurs underwater. Undersea eruptions, the National Oceanic and Atmospheric Administration say, are "a constant process that shapes the features of the ocean".

Oregon State University geologists estimate there could be as many as a million Called "submarine volcanoes".

The 1991 eruption of Mount Pinatubo, about 100 kilometres northwest of Manila, was the Philippines' most powerful in recent years and killed more than 800 people.

However, the eruption had worldwide impact.

Nearly 20 million tons of sulfur dioxide were shot skyward by Pinatubo, which then drifted globally.

"This gas cloud... caused global temperatures to drop temporarily (1991 through 1993) by about 1°F (0.5°C)," according to a US Geological Survey account of the eruption.

On top of the cooler temperatures, the gases and ash sent high in the sky by Pinatubo also caused "brilliant sunsets and sunrises", USGS said.

Indonesia is the world's most volcanic area.

The Southeast Asian archipelago of more than 17,000 islands and islets -- and nearly 130 active volcanoes -- is situated on the Pacific "Ring of Fire".

In 1815, Mount Tambora on the island of Sumbawa exploded in one of the most violent eruptions in recorded history. An estimated 12,000 people died, while a resulting famine killed another 80,000.

The island of Krakatoa was practically wiped off the map in 1883 by a volcanic explosion so powerful that it was heard some 4,500 kilometres away.

Around 36,000 people were killed in the eruption and the resulting tsunami. A new volcano emerged in 1928 on the same site.