Dung beetles forced to abandon the Milky Way as their compass 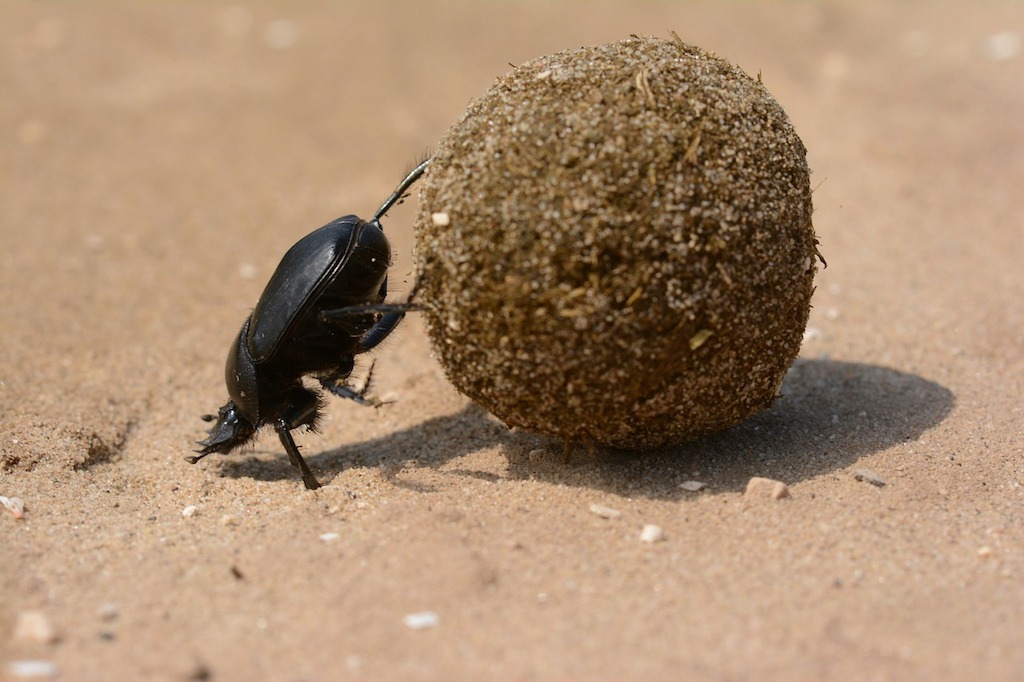 Before rolling the dung away to an area where it can safely dig into the ground, rest and feed, each beetle climbs on top of its ball and performs a brief pirouette termed the orientation “dance”. Pixabay/Topi Pigula

Globally, nights are becoming ever brighter. Increasing urbanisation and the installation of new streetlights, security floodlights and outdoor ornamental lighting all contribute to growing light pollution.

This light floods directly into the eyes of animals that are active at night and also into the skies. There a proportion of it is redirected back downwards towards an earthbound observer. This is known as “skyglow”, an omnipresent sheet of light across the night sky in and around cities that can block all but the very brightest stars from view.

We wanted to understand how this change in night brightness would affect animals that rely on the sky as their compass. Would their sensitive eyes be blinded by bright city lights? Would the disappearance of stars from the night sky cause them to lose their way? So we used the well-studied “sky compass” of the nocturnal dung beetle, Scarabaeus satyrus, to compare orientation under pristine and light polluted skies.

Our study compared the dung-rolling performance of beetles in a rural part of Limpopo province with that of beetles at the University of Witwatersrand in inner city Johannesburg, both in South Africa. Our findings confirm that beetles exposed to light pollution – both directly through the glare of bright artificial lights and indirectly via skyglow that obscures the stars – are forced to change strategy. They abandon their sky compass and rely instead on earthbound artificial lights as beacons.

This change in strategy comes at a cost.

These beetles, found across southern Africa, collect dung from various animals, fashioning it into a ball. By rolling this ball away from the dung pile they need not share it with other insects. But even when rolling their ball they are not safe from competition. Their best option is to leave the dung pile as quickly as possible, by using their internal compass to travel in a straight line away from it.

Before rolling the dung away to an area where it can safely dig into the ground, rest and feed, each beetle climbs on top of its ball and performs a brief pirouette termed the orientation “dance”. It scans the scene for features it can use to hold its course. Since it starts each night in unfamiliar territory, the most reliable references are those in the sky that stay stable while the beetle maintains the same heading. On starlit nights, the Milky Way acts as these beetles’ primary reference.

Read more: There's still so much we don't know about the star-gazing beetle with a tiny brain

When the beetles relied on artificial lights to navigate, they all rolled towards them – numerous beetles rolling in the same direction. Under natural conditions, they almost always roll in different directions. Rolling towards artificial lights makes them more likely to encounter one another and fights may break out as the beetles try to steal each other’s dung balls.

Artificial light is also more likely to guide beetles into the concrete and asphalt regions of their immediate environment, where they may find themselves unable to dig into the ground and bury their ball.

It’s not just dung beetles that could be affected by light pollution in this way. Even species that can rely on other compass references may still suffer from the loss of the stars. Nocturnal ants use landmarks for outbound journeys, but need their sky compass when returning home. Migratory birds have a magnetic compass, with which they check latitude and magnetic North, but use their sky compass to calibrate their magnetic compass to geographic North.

In the worst case, animals that need the stars to find their home or breeding site may never make it. But even with their backup systems, starless skies may cause them to gradually deviate off course, wasting energy and risking predator encounters.

We collected two sets of ten beetles at the same site, then transported them to our chosen locations.

When the skies were clear at both locations, beetles rolled their ball to the edge of a circular arena. Each beetle could be collected with its ball at the arena’s edge and replaced at the centre ten times in row, without losing its focus. This allowed us to record ten exit bearings for each beetle, to measure the accuracy of their compass under both pristine and light-polluted skies.

We also recorded the experimental conditions using a camera with a fisheye lens pointed up towards the sky. By post-processing these images, we could estimate what compass information should be available to a beetle when it performs its orientation dance. These images revealed that Johannesburg skies were between ten and 100 times brighter than those in rural Limpopo. The Milky Way and most other star patterns were almost completely obscured by skyglow in Johannesburg.

In spite of this dramatic loss of sky compass references, the beetles in Johannesburg performed at least as well as those in rural Limpopo. They maintained the same heading direction across sequential trials with remarkable accuracy. But on closer inspection it appeared that they were using different strategies to hold their course.

Beetles under pristine skies were relying on the Milky Way, as evidenced by a slight tendency to choose headings towards its brightest region. Those under light-polluted skies rolled towards brightly lit buildings.

Read more: The Moon and stars are a compass for nocturnal animals – but light pollution is leading them astray

In our follow-up experiments, the same set of beetles changed their behaviour when exposed to a single floodlight under pristine skies. They rolled towards the floodlight when it was switched on but dispersed away from one another when the light was switched off.

We also confirmed our worst fears about light-polluted skies. When bright lights were blocked from view, beetles in Johannesburg became completely disoriented. The light-polluted sky was of no use to them. Those viewing pristine skies remained comparatively better oriented.

There is a remarkably simple solution to reducing animals’ experience of direct and indirect light pollution: turning off unnecessary lights at night. Where lights cannot be turned off, they can be shielded so that they do not shed light into the surrounding environment and sky.

The International Dark-Skies Association has certified more than 130 “International Dark Sky Places”, where artificial lighting has been adjusted to reduce skyglow and light trespass. However, nearly all are in developed countries in the northern hemisphere.

This gap should be addressed. Less-developed regions are often both species-rich and, currently, less light-polluted, presenting an opportunity to invest in lighting solutions before animals there are seriously affected.