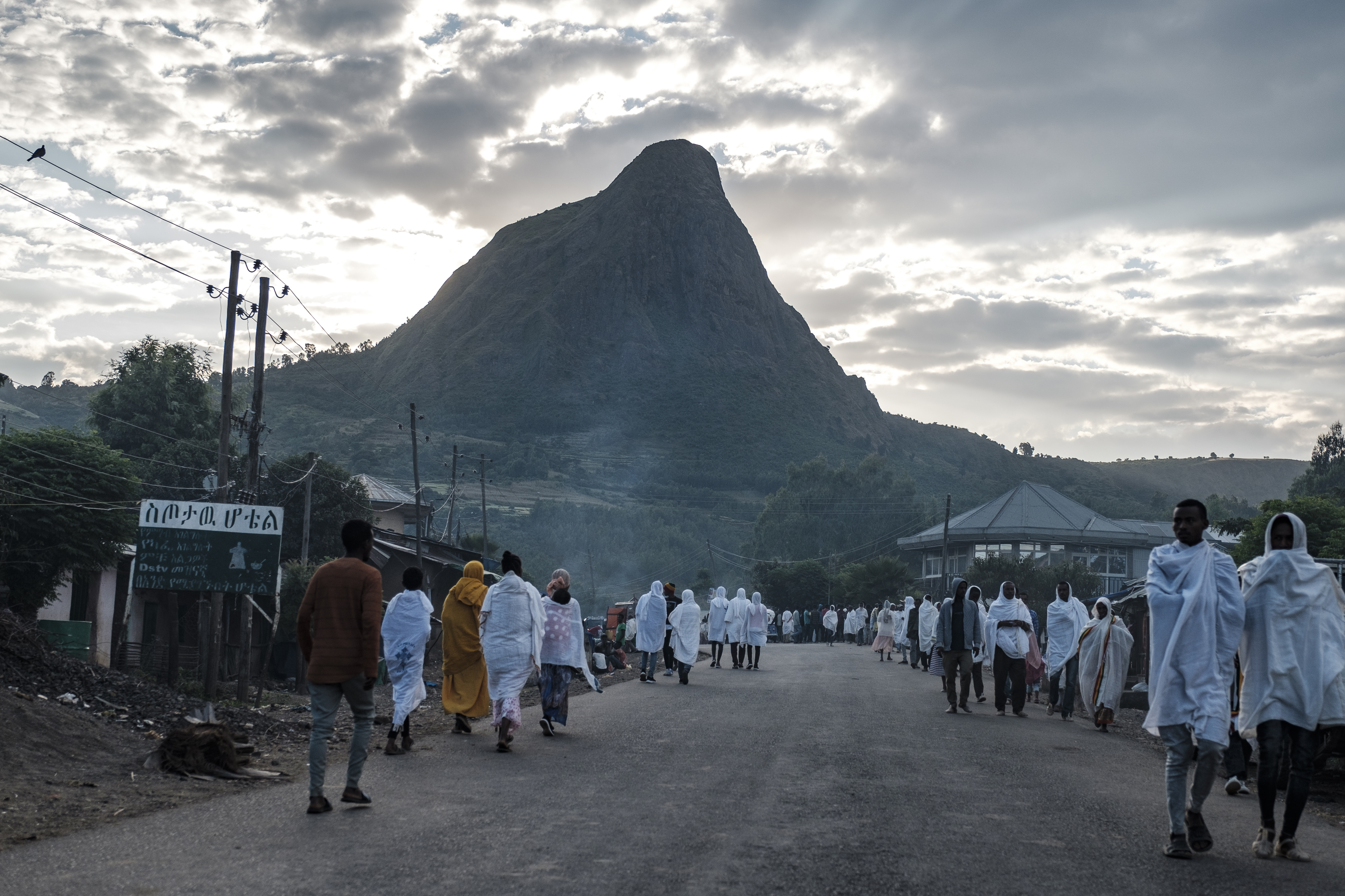 File: People walk to the church near the village of Tekeldengy, Northwest of Gondar, Ethiopia, on November 8, 2020. EDUARDO SOTERAS / AFP

GEDAREF, Sudan - Seated on the ground in a camp in Sudan's Gedaref region, Ethiopian schoolteacher Tadros Bay reads a story to four children huddled around him.

He somehow managed to rescue the book on his escape from Mai-Kadra in Ethiopia's Tigray region where he said atrocities were carried out by government forces.

Children listen attentively to the 32-year-old teacher with whom they share the fate of thousands of refugees thrown onto the roads by war in their homeland.

"I try to help these children but we don't have books or a place to study," he says.

The transit camp in eastern Sudan near the border with Ethiopia has become home for 17,000 refugees, including 5,000 children, according to Sudanese officials.

Built five years ago to relocate residents whose homes were flooded by a reservoir, so-called "village number 8" has only one school for Sudanese.

In the streets, children run, play and cry, their parents fearful they will turn into a lost generation because of a war that will drag on.

Conflict has raged since November 4 when Ethiopian Prime Minister Abiy Ahmed announced the launch of military operations in Tigray in a dramatic escalation of a long-running feud with the region's ruling party, the Tigray People's Liberation Front (TPLF).

According to the UN High Commissioner for Refugees (UNHCR), 4,000 people have been crossing the border with Sudan each day since November 10.

Iessa Burhano, 29, and her husband owned a hotel in Mai-Kadra, in southwest Tigray, the scene of alleged atrocities.

Amnesty International, citing witnesses, has accused forces loyal to the TPLF of responsibility for a "massacre" which "probably" left hundreds of civilians dead in Mai-Kadra.

However, several refugees interviewed by AFP in another Gedaref camp, Um Raquba, say the abuses were committed by federal army troops.

"Soldiers of the federal army attacked our hotel, looted it as well as our other properties," Iessa Burhano charges.

Now, her three children, aged eight, 10 and 13, who were supposed to return to school this month, are "refugees and will certainly not be able to resume their studies", she says.

Originally from Humera, in western Tigray, Tasfai Gabro, the father of four school-age children, also had to flee his village.

"Now that we are in Sudan and although I am not worried about the immediate future, I fear for the future of my children," says the 60-year-old truck driver.

"I think the war will last a long time. What a future for my sons!"