Failing health system in spotlight ahead of election 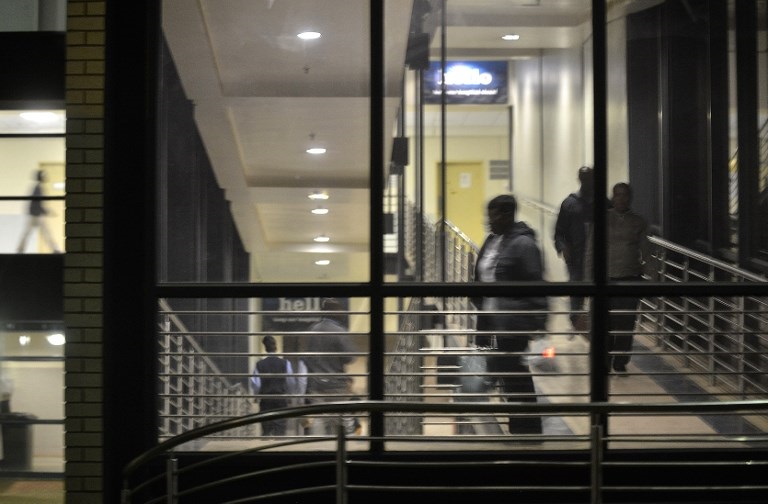 File: People walk on a public passage at the Chris Hani Baragwanath Hospital in the South African landmark township of Soweto.

JOHANNESBURG - Six psychiatric patients are tied to their beds in two tiny, dimly lit cubicles in the emergency ward of South Africa's biggest hospital, where the country's dire healthcare crisis is starkly evident.

Some of the group are restrained using just medical bandages, while one screaming female patient is tied to a bed that is itself haphazardly secured to a pillar.

The scenes at the vast Chris Hani Baragwanath Hospital, in the township of Soweto outside Johannesburg, provoke little visible reaction from hurried staff or from other patients.

Staff says the hospital always has serious mental health cases in its casualty unit waiting for a bed.

According to a doctor who wished to remain anonymous, some are left for three days with little food and water -- one sign of chronic lack of resources in South Africa's healthcare system, which has been a political battlefield ahead of the May 8 general election.

"We can't move psychiatric patients on fast enough because it takes a long time for them to get better and the wards are full," said the doctor. "They are the forgotten people."

Voting this year will mark 25 years since the end of apartheid rule, but hopes have been dashed that the new era would produce a modern, accessible public health service.

The grim cost of the failing system was highlighted in a recent scandal when 144 mental health patients died in 2015 and 2016 in a botched government plan to relocate them from a private hospital to poorly-prepared local facilities as a cost-cutting measure.

Many of the deaths occurred due to mistreatment, pneumonia, dehydration and diarrhoea.

Last year Health Minister Aaron Motsoaledi, of the ruling ANC party, broke down as he apologised for what he described as "one of the most painful and horrible events in the history of post-apartheid South Africa".

When it came to power in 1994 at the end of white-minority rule, the African National Congress party vowed to introduce "affordable health care, to ensure that all South Africans are guaranteed basic treatment."

The ruling party's solution now is for a National Health Insurance (NHI) system, similar to that in many European countries.

In 2017, that imbalance was reflected by only 10% of the black majority having health insurance, compared to 71,7% of the white minority.

But the ANC proposal is "entirely unfeasible and places the stability of the national fiscus at risk," according to the main opposition Democratic Alliance (DA) party.

DA policy is to work with private healthcare insurance companies to extend low-cosy coverage to more than 50% of citizens.

READ: Access to basic healthcare a battle for some

"I know that people here can wait as long as three years to have a hip operation, and the medical negligence claims in the maternity section are sky high," he said.

Over 60 vacancies for doctors and 300 for nurses have been left unfilled at the hospital -- which has a total staff strength of around 6,000 -- due to budget cuts.

"They promised us they were going to build five hospitals in Soweto to take the pressure off and all they have done is built one," said another hospital doctor who did not wish to be named.

The vast and crumbling Baragwanath hospital has approximately 3,200 beds for some 1.5 million surrounding residents while also serving as a teaching hospital and a referral hospital from across South Africa and even across Africa.

READ: Ill-treatment of patients has SA Society of Psychiatrists concerned

Deputy director-general for health in South Africa Yogan Pillay told AFP it was clear the government budget "is falling behind the need".

"Budgets are allocated to a facility on the basis of the people in that catchment area but if we have an influx -- including internal migration -- then people run short of supplies," he said.

"We have to increase the efficiency in both the public and the private sector."

South Africa has made strides in its treatment of AIDS and tuberculosis, but the election seems to offer little immediate hope of improvements to healthcare.

The system is crippled by "poor leadership and governance at all levels," said senior lecturer and public health specialist doctor Kerrin Begg.

"It will need to be strengthened substantially, especially in terms of physical infrastructure and human resources."