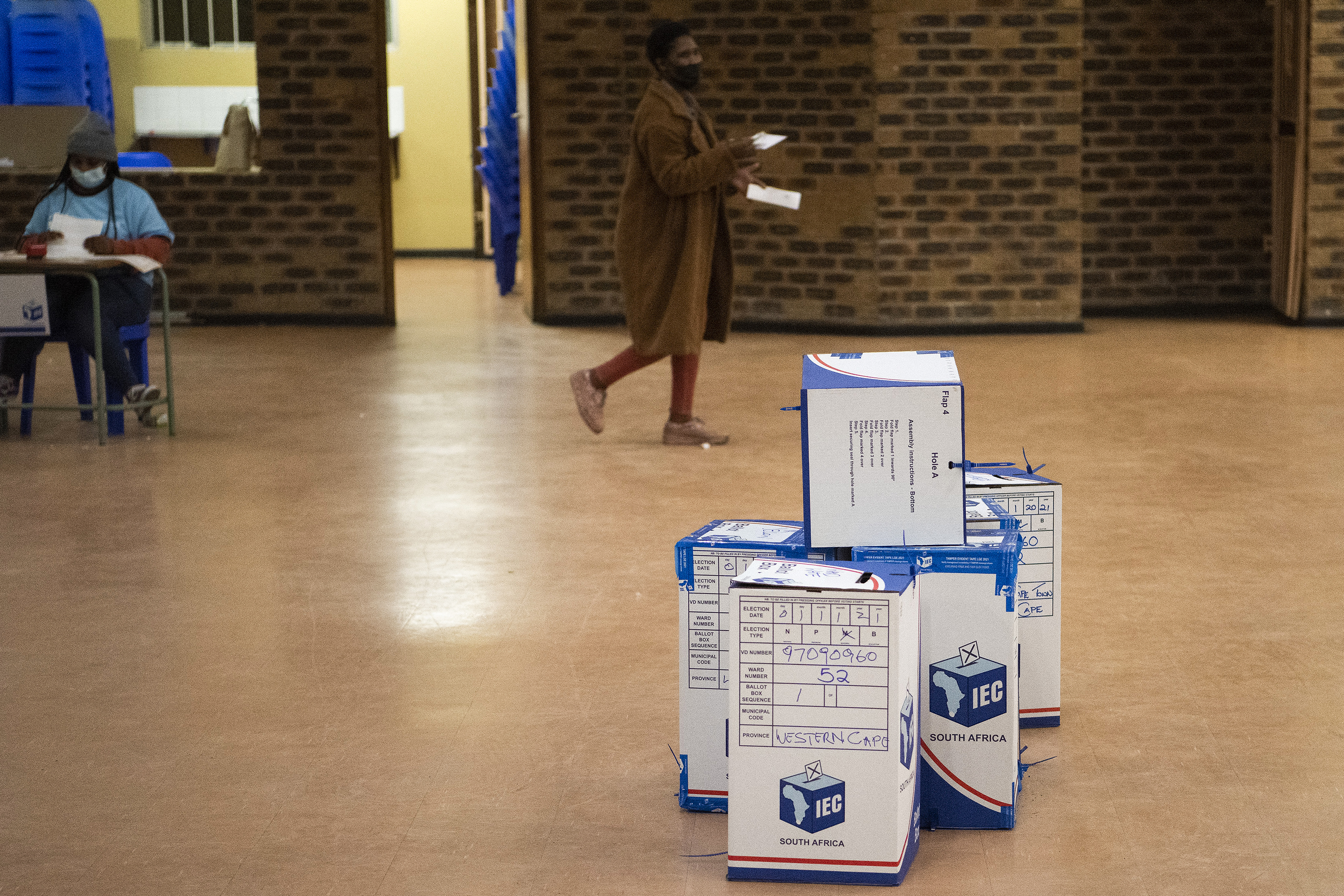 One of the last voters comes into the voting station held at the Isilimela Comprehensive School in Langa township, in Cape Town, on November 1, 2021 shortly before closing, during South Africa's local elections.

Why do so few South Africans vote? The 2021 local government elections witnessed the lowest turnout for democratic elections in South Africa: just under half of registered voters came to the polls. This reflects a longer trajectory of declining voter turnout, which has been in evidence since at least 2009.

South Africa is not alone in facing declining voter participation. Internationally, this is a trend that has been documented since the 1990s. Nonetheless, falling turnout is a critical barometer of the health of the post-apartheid democratic project. How people vote is a signal of their political and ideological preferences – but whether they vote at all tells us something about people’s approval or disapproval of the institution of democracy itself, as they experience it.

Most of the available research into the barriers to voting and motivations for abstention has used social attitudes surveys, either conducted before or some time after an election. While valuable, such surveys cannot capture the mood of the people in the period immediately after the election.

This is what we set out to do. With our team we conducted 3,905 telephone interviews, talking to both voters and non-voters in five metropolitan municipalities: eThekwini, Nelson Mandela Bay and the cities of Cape Town, Johannesburg and Tshwane. People were asked about their participation in the 2021 and 2016 local government elections, as well as the 2019 national and provincial election.

Five main reasons emerged for not voting. The most common were individual barriers and administrative barriers, followed by complaints about service delivery and corruption, uninterest or disillusionment, and a lack of political alignment.

Our research supports other analysis highlighting that the South African electorate is becoming less tied to race and identity based voting but are increasingly making a wider evaluation of the performance of political incumbents.

Electoral non participation was a much more fluid phenomenon than we had anticipated.

When looking at voter abstention amongst eligible voters across the last three elections, we found that only 14% of those surveyed had abstained in all three of the last elections – a category to whom we referred as “hardened abstainer”.

Of those who abstained in the 2021 poll, more than half (58%) had voted in at least one of the last two elections. In contrast, 59% of those surveyed who had abstained in the previous two elections opted to vote in the 2021 election. This highlights that, while we know that more people are choosing to abstain, this is also a complex phenomenon: people are making largely context-based decisions on whether to vote or not.

Our research showed that non-voters were more likely to be young (under 35), and students – 59% of whom abstained from the 2021 local government election within the five municipalities. They are also more likely to be black African, Indian or coloured than white. Non-voting was also higher at both the lowest and highest income groups.

But voter abstention is driven by much more than a socio-demographic profile: it reflects how people assess the political landscape.

We asked participants to explain in their own words why they chose not to vote. Five main reasons emerged.

A third (34%) of the responses cited an individual barrier. The most common were not being in their registered voting district on election day, being at work or simply being too busy.

A further 22% indicated some form of administrative barrier. The most common reasons here were not being registered or not having an ID. Of this group, about a quarter had attempted to vote but encountered a problem at the voting station; either they found they were not registered or were registered in a different voting district.

The third most common explanation was what we termed performance evaluations – reasons related to complaints about service delivery and corruption. This accounted for 19% of explanations and centred on people not having seen changes for themselves or their communities.

…according to me … this thing of voting is useless because there is corruption and we are not working. This voting this is not working for us.

Performance evaluations were more frequently cited by black African non-voters and by the unemployed. They also featured more prominently in the explanations provided by those living in informal settlements (30%), backyard rooms (27%) and township and government-provided RDP houses (21%) than in those offered by people living in suburban houses (11%) and of those living in flats, apartments or townhouses (12%).

A lack of political alignment was the least common reason, accounting for only 4% of explanations overall. However, it is interesting to note that this reason was more commonly expressed among high income earners.

The future of voter turnout

Encouragingly, our findings seem to suggest that voter abstention is a fluid phenomenon. Abstaining in one election does not necessarily mean disengagement with the electoral process forever. This, perhaps, puts the onus on political parties to connect with those who disengaged from the 2021 local government election and speak to their concerns.