FW de Klerk made a speech 30 years ago that ended apartheid: why he did it 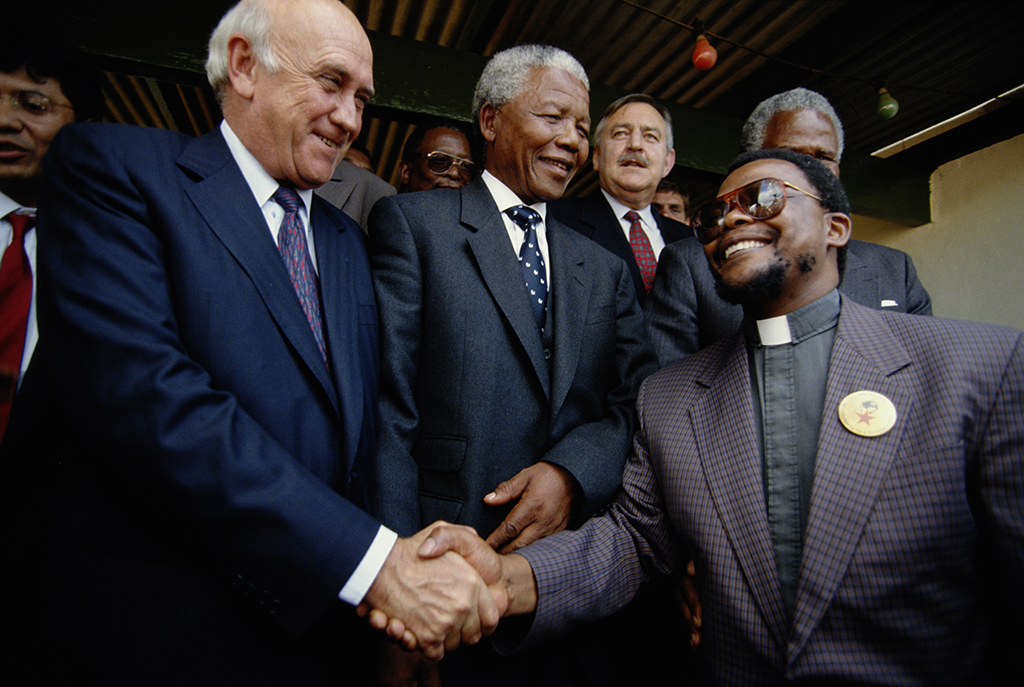 Thirty years ago, on 2 February 1990, a speech was delivered by then President FW de Klerk that marked the beginning of a radically new political landscape for South Africa.

In his opening address to parliament, De Klerk unbanned the exiled liberation movements, notably the African National Congress (ANC), Pan-Africanist Congress (PAC) and South African Communist Party (SACP). All had been embroiled in a fight against white minority rule. He also announced a moratorium on the death penalty, the end of the state of emergency – which had been in place for five years – and the release of political prisoners.

The speech set off a series of dramatic, and, until that point, unforeseen events. Nine days later Nelson Mandela was released from prison after 27 years. Within three months the first bilateral talks between the ANC and the De Klerk government happened.

De Klerk’s speech that day has often been portrayed as having happened because of a Damascene moment on his part: that is that he suddenly had a blinding insight that apartheid was bad.

My view is different: I believe that the speech was preceded by an array of developments that created an environment which either forced or encouraged him to make the epochal announcements.

Thirty years later, it is an opportune time to take stock of the historical significance of the 1990 speech. What insights can we gain from that single event, and what does it tell us about how history is made?

Apartheid was regarded as one of the most intractable international issues of the time. Hence its demise, to which De Klerk’s speech helped provide the impetus, shows that even the most seemingly intractable political problems can be resolved peacefully.

The demise of De Klerk’s predecessor PW Botha, after suffering a stroke, on 18 January 1989, was a critical change in the dynamics. On 2 February 1989, De Klerk succeeded him as leader of the National Party (NP), which governed apartheid South Africa.

De Klerk immediately made changes to Botha’s military security paradigm by down-grading the State Security Council and its local structure staffed mainly by the military and police, and restored civilian rule by cabinet.

As new party leader, he undertook an international tour after realising the extent of the international community’s abandonment of National Party rule. He met then UK Prime Minister Margaret Thatcher in 1989. She made the urgency of Nelson Mandela’s release clear to him.

In the ANC too changes were underway. The liberation movement took the initiative in the form of the Harare Declaration, its framework for a democratic transition in South Africa. It publicly showed the ANC’s willingness to negotiate and not to rely mainly on strategies like the “people’s war” and armed struggle to bring an end to apartheid.

The ANC wanted to take the initiative in moulding a transition framework. The declaration was adopted by the Organisation of African Unity in August 1989 and later by the Commonwealth in October 1991.

Other developments in the background provided impetus to De Klerk’s announcements. These included talks-about-talks in three separate processes between the NP and the ANC. South Africans knew nothing about these encounters.

The first was a series of meetings between Mandela and Justice Minister Kobie Coetsee and his team. It included talks about his release as well as Mandela’s views on a range of policy matters.

The second process was in the form of a number of meetings in Switzerland in the late 1980s between ANC leaders such as Thabo Mbeki, Jacob Zuma and Joe Nhlanhla, with senior officials of South Africa’s National Intelligence Service.

The talks explored the ANC’s thinking on important matters like the economy and the armed struggle. With these talks both sides could determine whether there would be sufficient common ground for a dialogue. 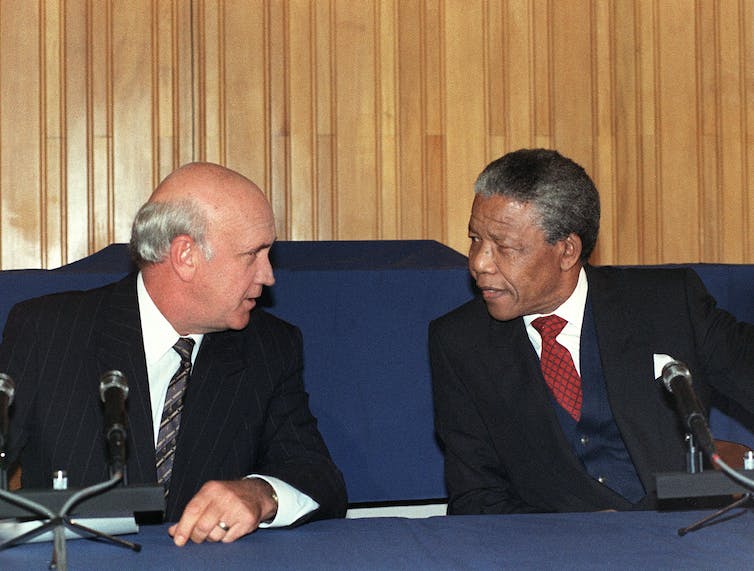 FW de Klerk and Nelson Mandela were awarded the Nobel Peace Prize in 1993 for their role in South Africa’s peaceful transition. Getty images

The third process was a set of meetings in the UK between the ANC under Thabo Mbeki, and groups of Afrikaner intellectuals coordinated by the academic, Willie Esterhuyse. As a civil society grouping with direct access to the National Party government, they explored the same topics as the Swiss talks.

In hindsight, this process served to legitimise future dialogue, both for the National Party government once official dialogue was publicly announced, and for the Afrikaans community, which respected its intellectuals.

All these talks helped the leaders on both sides view one another as fellow human beings capable of working together. They also clarified their views and strengthened the credibility of dialogue as a way to break South Africa’s political stalemate.

One was that the country was under a state of emergency. First announced in 1985, the government used it to quell the growing revolt in the black townships.

But the heavy-handed approach failed to pacify the townships, leading to a stalemate that hurt both the apartheid regime and its opponents.

The other domestic development was the impact of the United Democratic Front formed in 1983, which united several anti-apartheid organisations, effectively under the banned ANC’s banner.

Public disillusionment with the state of emergency – and a general realisation that the National Party government had exhausted all its options – deepened the stalemate.

De Klerk responded by meeting leaders of the then Mass Democratic Movement, which brought together the United Democratic Front and the trade union movement, led by Bishop Desmond Tutu among others, in October 1989. He also announced the release of ANC leader Walter Sisulu and all the other Rivonia trialists, except Mandela whose turn would come four months later.

A huge welcome rally was held for the Sisulu group outside Soweto. The event amounted to a de facto unbanning of the ANC. All its banned symbols were on public display. Sisulu and others’ speeches were unmitigated renditions of the ANC’s message.

Two international moments served as the final push for De Klerk. On 9 November 1989, the Berlin Wall fell. De Klerk later explained that this signified the end of Soviet socialism and its influence on the ANC. That meant the ANC would be less ideological and more open for negotiated compromises, making it the opportune time to negotiate.

Four months later, Namibia became independent under the leadership of the ANC’s ally, Swapo. At the time of De Klerk’s speech most of the negotiations for Namibia’s independence had been concluded – with South Africa’s support. To some degree a free Namibia was therefore a precursor to a free South Africa.