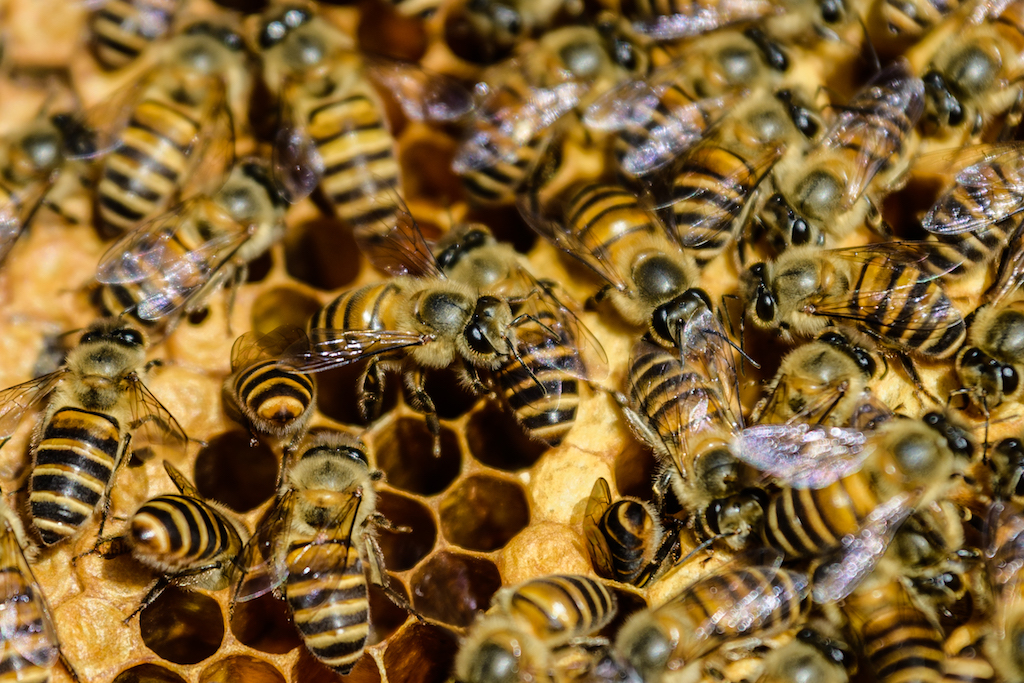 File: Honeybees too can learn to match symbols and numerosities, much like we humans do with Arabic and Roman numerals.

HONG KONG - High up in the hills above Hong Kong, Yip Ki-hok uses nothing but his bare hands to remove a honey-filled nest of swarming bees -- a remarkable skill he learned after the hardship of China's famine years.

While most new beekeepers buy insects from those with already established colonies, Yip prefers a more organic method, trekking into the hills and catching wild bees using skills he developed through trial and error from the age of seven.

The 62-year-old effortlessly moves through bush and dense thickets, far from the official hiking trails, and pauses at a hole in the hillside he knows will contain a bee colony.

Lighting five incense sticks to placate the bees, he waits for the smoke to take effect and then reaches into the hole, removing chunks of the hive along with handfuls of bees.

Remarkably he is only stung twice. The trick, he explains, is to remove as much of the hive as possible without killing or losing the vital queen.

"If you wear gloves, then you don't know how much strength you're using," he tells AFP. "If you use too much strength and accidentally kill the queen, it's very troublesome, it'll be very hard to take the hive back."

Moving slowly and carefully, he blows on the hive to herd the bees into a wire cage covered with a white drawstring bag.

He searches for the queen as stragglers buzz around him -- a crucial part of the operation as the other bees in the hive are fiercely attracted to her.

"Without the queen, they will get angry and go looking for her everywhere. If they can't find her they will fly right back out of the cage. They’ll fly around everywhere to find her and start stinging like crazy," he said.

Although he was once stung more than 200 times when he lost the queen during an extraction, Yip says he has no need for gloves or other protective gear.

"Why would I need those things? I know their nature like I know my own hand. No matter how mean they are I still have a way to tame them," he explained.

Back at his farm, Yip uses wire to attach the honeycomb to wooden frames, which are then slotted into wooden crates. Then he pulls out handfuls of bees from the drawstring bag and places them gently in their new home.

Yip generally collects honey three times a year from over 200 hives, extracting the golden liquid by spinning each frame in a metal drum.

It was on the Chinese mainland Yip learned his skills, in the wake of Mao's famine when millions starved and people took whatever steps they could to survive.

Yip worked as a teacher in Guangdong province, supplementing his meagre income by trading honey for food coupons.

He switched to full-time beekeeping after economic reforms under Deng Xiaoping in the late 1970s allowed private businesses to flourish.

After his wife's family successfully relocated to Hong Kong in 1983, Yip followed -- although it took him some five years as he was caught each time he tried to smuggle himself across the border before eventually making it through legally.

He had to start his beekeeping from scratch, building boxes for the colonies out of scraps of discarded wood.

Within a year he had 150 healthy hives, laying the foundations of a business which has since grown into one of the city's biggest local honey producers.

But as the global climate warms and fuels bigger storms, his livelihood -- and Hong Kong's bee population -- face increasing challenges to their survival.

Ever expanding urban developments in the densely populated city already threaten wild bees and their food supply. And ever stronger tropical storms are exacerbating the damage.

Last year Typhoon Mangkhut -- the most intense storm on record in Hong Kong -- tore through the city, knocking down tens of thousands of trees and flattening huge swathes of pollinating flowers.

"Last year this hole was full to bursting, but it wasn't like that this year," he said, referencing the hillside where he had just plucked out the hive.

Another colony he visited earlier that day had also fared badly.

"That first hive I picked up has not recovered at all," he lamented. "Typhoon Mangkhut was too strong, it felled over half of the trees and flowers... without the plants, the bees naturally reproduced more slowly."

While Yip plans to continue trekking into the hills as long as he can, he hopes the typhoons of the future will give Hong Kong and his favourite bee colonies a miss.