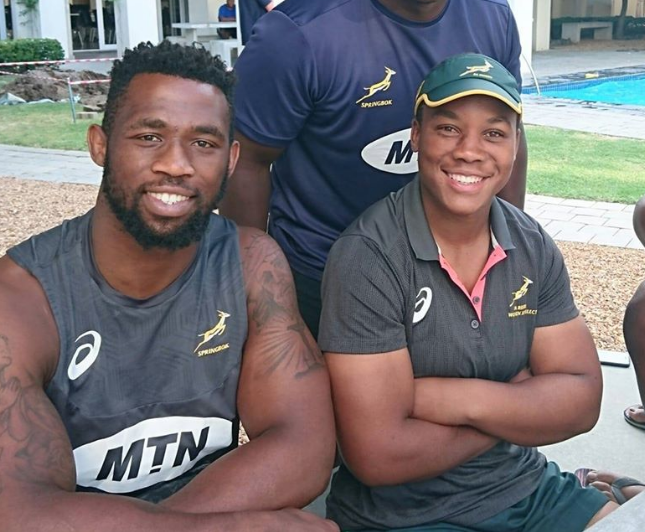 JOHANNESBURG - The Springbok women's captain, Babalwa Latsha, said that the rugby field is one of the few places she feels safe in South Africa, where a woman is murdered every three hours.

The 25-year-old star said the South African men's first Rugby World Cup win under a black captain on Saturday had "ignited a flame" in her team to win the 2021 women's World Cup.

"No one can attack you on a rugby field. No man can point a gun at you, hurt you, throw a fist at you. We feel safe there, but we should feel safe everywhere," Latsha said in a phone interview with the Thomson Reuters Foundation.

About 3,000 women in South Africa were murdered in 2018, which is more than five times higher than the global average, according to the World Health Organization.

Latsha, who comes from one of Cape Town's biggest townships, Khayelitsha, said the women's team had "drawn strength from the men's team, and also from themselves as women" to qualify for the upcoming World Cup in New Zealand.

Latsha's love for rugby came quite late in life, at the age of 20, when a rugby-training programme called Vuka came to Khayelitsha to train and search for grassroots talent.

"I fell in love with the sport," said Latsha. "It gave me a sense of belonging, ownership and power. It is the one place where I can just be myself fully, without worrying who will think what or say what about me."

Latsha said she has spent her life answering to people "with the audacity to ask about my gender" for being very muscular.

"People in the street will stare at me, or walk up to me and ask why I look the way I do. You just have to develop a thick skin," she said.

"The truth is, to society, my body is an anomaly but on the rugby field it is a marvel."

Latsha said she felt for Caster Semenya, South Africa's double Olympic champion who has hyperandrogenism, a medical condition, and was barred by The International Association of Athletics Federations (IAAF) because of her testosterone levels.

"It is heartbreaking what she has been through as a woman," said Latsha, referring to the global athletics governing body's requirement that Semenya take hormonal drugs that made her feel sick to lower her testosterone levels.

"Someone of that calibre, with such a natural strength and prowess, has had to be curtailed to be herself. She is the best in the world. The world needs to rise up to her level."

According to the World Rugby rankings, the South African women's team is the best is Africa and 15th globally.

Latsha, also a law graduate, hopes to set up a sporting agency for women, which would educate them about their rights to equality and freedom from discrimination, as well as providing mentorship and training to thrive in the sporting world.

"Sport can educate, empower and break down stereotypes about women," said Latsha.

"Women are taught to be submissive and this contributes to the normalisation of violence against women. The least we can do as sportspeople is to continue to be trailblazers who refuse to accept that is normal."

"We are created for greatness," said Latsha. "(The Springboks') win has shown us our own dreams are not too big, too wild, too impossible to achieve."