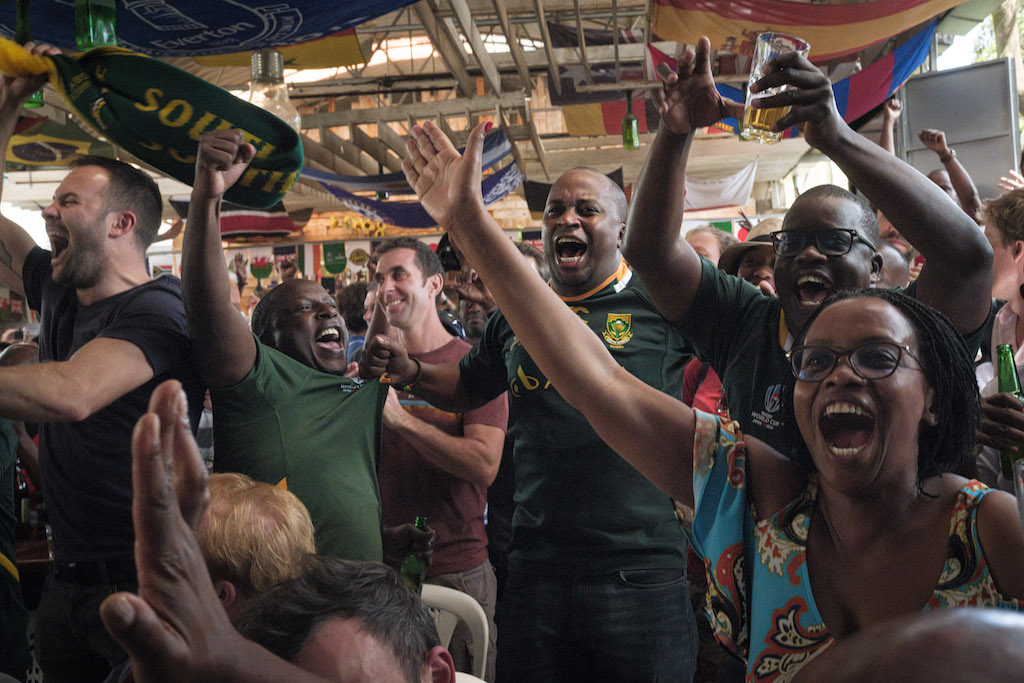 File: Fans react as they watch the Rugby World Cup 2019 final between South Africa and England.

JOHANNESBURG - South Africa's stunning victory at the Rugby World Cup has prompted a swathe of tributes across a country that has been knee-deep in unemployment and crime.

The sight of Siya Kolisi, the first black player to captain the Springboks at a World Cup let alone lift the Webb Ellis trophy, provided an iconic image that human rights leaders and the government would like to exploit over the coming months and years.

"What a fantastic achievement Siya Kolisi, (coach) Rassie Erasmus, and all the players and staff," said Nobel Peace Prize winner Archbishop Desmond Tutu, a key mover along with Nelson Mandela of the end of apartheid in the early 1990s.

"You have achieved much more than winning a Rugby World Cup.

"You have restored a self-doubting nation's belief. When we believe in ourselves we can achieve our dreams. Our father, Nelson Rolihlahla Mandela, is smiling from the heavens today."

READ: Kolisi wants to be beacon of hope for new generation of Boks

The significance of Kolisi captaining the team has not been lost.

South Africa were banned from the first two editions of the World Cup in 1987 and 1991 because of their apartheid system of government.

When that came to an end they were not only welcomed back into the rugby fraternity but awarded the 1995 edition to host.

The Springboks went on to beat New Zealand in the final which saw their white Afrikaner captain Francois Pienaar accept the trophy from Mandela who had been elected as the first black president a year earlier.

The only black player in the side was Chester Williams who sadly died just before this World Cup at the age of just 49.

When South Africa won in 2007, they were captained by another white player John Smit and the team contained just two black players -- Bryan Habana and JB Pietersen.

"May this moment reinvigorate the hope of 1995 and inspire our nation to build a South Africa of Madiba's dreams," said the Nelson Mandela Foundation in a statement.

"Today stands as a great example of what we are able to achieve when we stand together."

The moment was not lost on 28-year-old Kolisi who grew up in a township outside Port Elizabeth in the Eastern Cape.

"We have so many problems in our country and this team comes from different backgrounds, different races, but we came together with one goal and we wanted to achieve it," he said.

"I really hope we've done that for South Africa. (It) just shows that we can pull together if we want to achieve something."

The media also jumped in with their own headlines and vast column inches dedicated to the victory of Yokohama.

"It is the responsibility of the rest of South Africa to take their cue from the Boks, put aside their petty squabbles and put their country first," said the Sunday Independent.

The Sunday Times, however, cast a contrary note about the future of South Africa.

"It faces a bleak, junk future," it said.

The wave of euphoria may benefit President Cyril Ramaphosa as he grapples with a 29 percent unemployment rate which is crippling the economy and a crime wave which accounts for an average of 58 murders per day.

"The united spirit displayed during this World Cup shows us that South Africa can overcome any challenge through determination and by working together," said the government in a statement. "We are indeed #StrongerTogether."

Boks coach Rassie Erasmus touched on the social difficulties in South Africa during his post-match press conference on Saturday.

"In South Africa pressure is not having a job. Pressure is one of your close relatives being murdered," said the 47-year-old who played for the Boks in the 1999 World Cup.

Habana, a winner in the 2007 team, described Kolisi's rise from township boy to World Cup leader as "incredible".

"To see a guy galvanise a team which didn't look as though it could win 18 months ago is extraordinary," he said.