Mboweni has little wiggle room for wrangling our fiscal fiasco 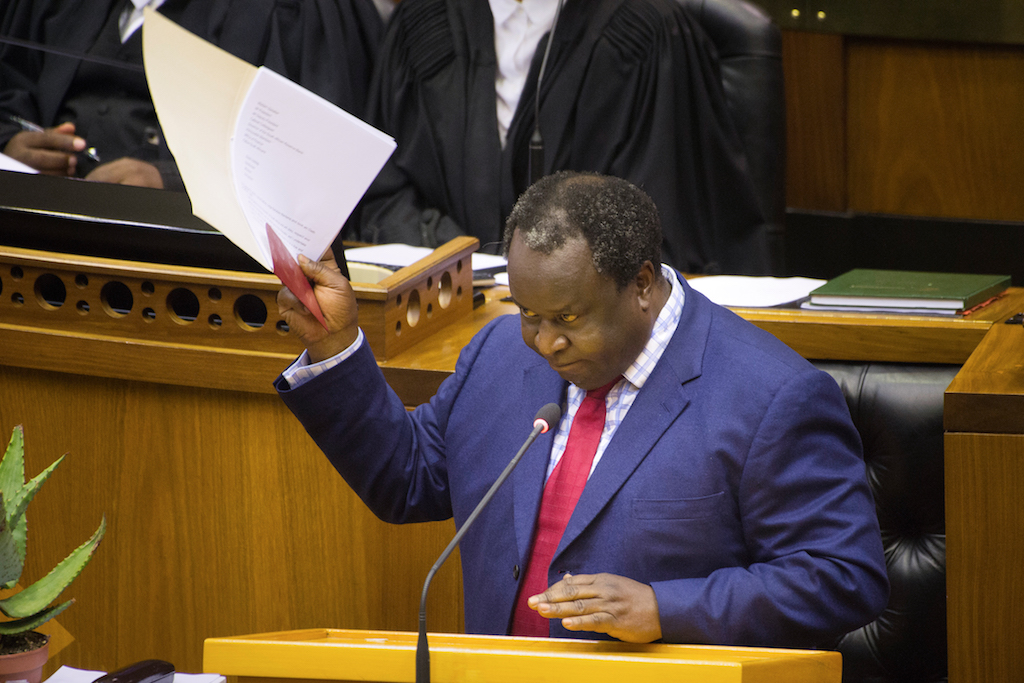 File: With SA’s fiscus in a truly perilous shape, Finance Minister Tito Mboweni’s 2020 budget is the most critical of SA’s democratic period.

JOHANNESBURG - Our moment of reckoning has arrived.

A decade of countercyclical fiscal policy since the global financial crisis has seen South Africa’s debt burden rise from 22 percent of GDP to about 61 percent today.

With a main budget deficit that is likely to hit nearly 7 percent of GDP in the fiscal year, the debt burden is set to become weightier still, even with a strong fiscal adjustment effort.

The medium-term budget policy statement (MTBPS) Finance Minister Tito Mboweni unveiled in October presented no answers, but was a call to arms for politicians to do something to arrest our fiscal slide.

Mboweni argued that South Africa needed to cut R150-billion from the budget over the next three years by tackling upside spending pressure from the wage bill, SOCs and other fiscal leakages, to produce a balanced primary budget (excluding Eskom support) by 2022/2023.

More recently, the IMF estimated that without an acceleration in growth, South Africa needs expenditure cuts amounting to at least 4 percent of GDP — equivalent to R205-billion — to stabilise the public debt. Unfortunately, as things stand Mboweni’s room to manoeuvre seems limited.

Despite promises by President Cyril Ramaphosa in the recent State of the Nation Address (Sona) that Mboweni would announce cuts to overall expenditure and improvements to its composition in the 2020 budget, we do not see how he can achieve sufficiently large spending cuts in the upcoming fiscal year without damaging essential service delivery.

READ: Tax payers to feel the pinch in Wednesday's budget

Notably, about 55 percent of budgetary expenditure comprises interest payments on the debt (which cannot be cut), social grants (which would be supremely immoral as well as socially catastrophic to cut) and employee compensation.

With total public sector compensation amounting to about 14 percent of GDP — only a handful of countries elsewhere in the world report a higher ratio — some restraint on public sector pay seems warranted. However, the government has promised there will be no retrenchments in the public sector, and its early voluntary retirement initiative had very poor take-up. In fact, the number of public sector workers at the national and provincial government level increased by 32,000 in the first half of this fiscal year.

The painful truth is that cutting expenditure is always hard, and spending has already been trimmed quite a lot to make room for the huge bailouts to Eskom, now sitting at about 1 percent of GDP per annum.

Further spending cuts somewhere in the strained budget will also have to be made to honour the Sona promise to “top-slice” 1 percent of the budget to fund measures to tackle youth unemployment.

READ: Negative outlook for the economy in 2020

Thus, we believe it will be very hard for Mboweni to front-load much of the targeted R150-billion net expenditure cuts. To date, the government has not been able to achieve the necessary social consensus and public sector union buy-in on the need for pay restraint. We modestly assume just R20-billion of spending cuts for the upcoming fiscal year on top of what was announced in the MTBPS.

Instead, we think a big chunk of the government’s fiscal adjustment effort in the 2020 budget will have to rely on taxes. Before the MTBPS, the Treasury argued that there was mounting evidence that the stuttering economy could not support any further tax increases.

However, since the MTBPS this narrative seems to have gone silent. We are less certain about the total quantum and composition of the tax hikes, but have made the rather bold call that Mboweni will hike the VAT rate by one percentage point to raise an extra R21-billion or so.

However, such a step would be political dynamite, so it is by no means a foregone conclusion.

If Mboweni does hike VAT, he would likely also have to hike the top marginal rate of personal income tax for the political optics, even though the zero-rating of many basic foodstuffs and other goods and services means VAT in SA is not regressive.

Regardless, we also expect Mboweni to try to squeeze a little more out of personal taxes in general by the so-called stealth tax of not adjusting tax brackets for inflation.

What other options does he have? At 28 percent, the corporate income tax rate is already high by global standards. Moreover, a tax hike here would have little revenue potential given poor corporate profitability at present and would undermine the government’s efforts to boost business confidence and fixed investment.

The government may try to introduce measures to close tax loopholes exploited by multinationals operating in South Africa through the OECD-wide base erosion and profit-shifting initiative. The revenue drive will also likely be supplemented by smaller taxes, such as the fuel levy and “sin” taxes.

Notably, some improvement in tax elasticity from the conservative MTBPS assumptions could feature in the 2020 budget, given current efforts to rehabilitate the SA Revenue Service, which got new leadership in May and an extra R1.3-billion in the MTBPS. This will lead to improved collection efficiency. An increase of just 0.1 in tax elasticity would generate just shy of R10-billion more revenue.

Beyond the narrow question of spending and taxes, other issues that will feature prominently in the 2020 budget are the stance on further bailouts for ailing SOCs such as Eskom and SAA, ballooning contingent liabilities in the Road Accident Fund, and the rather impractical Sona promises to establish both a sovereign wealth fund and a state-owned bank, both of which will need to be capitalised from a depleted fiscal space. National health insurance also raises major fiscal uncertainties and risks, though its full implementation is a few years off yet.

We are particularly interested to see what Mboweni’s 2020 budget has to say about the structural reform agenda. After publishing a generally well-received economic strategy paper in August 2019, he used the MTBPS to further drum up support for the paper’s growth-boosting reform proposals, which seem to be gaining some traction within government and the ANC.

But faster implementation is key, because South Africa will not be able to fix either its fiscal deficits or its socioeconomic deficits without substantially stronger growth. However, many of the paper’s key policy proposals lie outside the ambit of the Treasury as a policy-formulating institution.

Ramaphosa’s commitment in the Sona to the approach of social compacting is important since progress on the structural reform front usually requires trade-offs and compromises between different stakeholders. The nature of structural reform — with pain felt upfront by a specific interest group and its benefits enjoyed later by a much more dispersed group — inevitably engenders much opposition.

Unfortunately, finding a workable compromise or trade-off to achieve buy-in from divergent stakeholders is unlikely to be a quick process in a robust democracy such as South Africa.