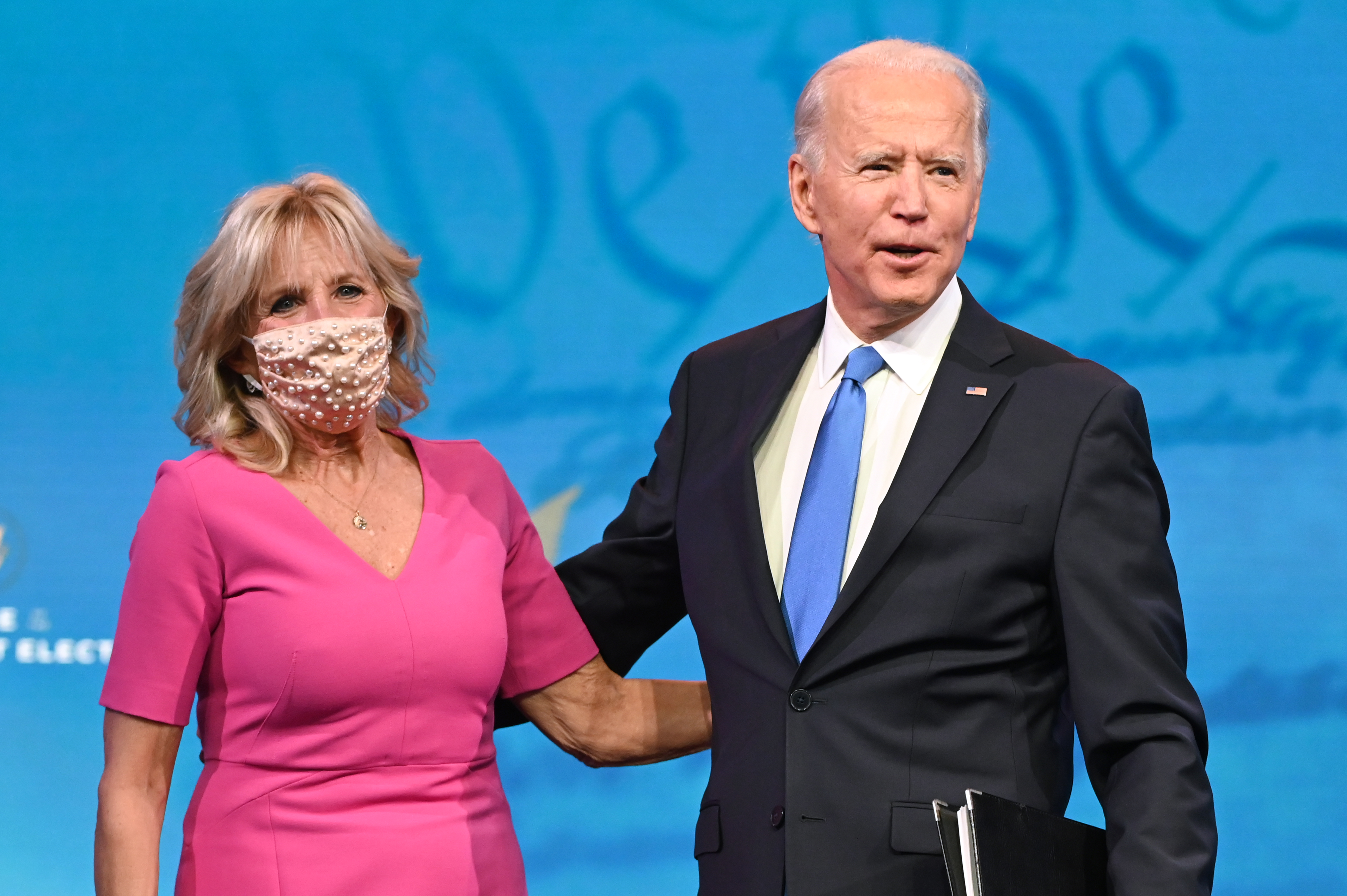 US President-elect Joe Biden arrives with wife Jill Biden to deliver remarks on the Electoral college certification at the Queen Theatre in Wilmington, Delaware on December 14, 2020. Roberto Schmidt/AFP

WASHINGTON - President-elect Joe Biden and his wife Jill will become the new White House residents when he takes office on Wednesday.

Biden has made his family a major focus throughout his career, and his 2020 presidential campaign thrust them fully into the spotlight -- with some members causing controversy but others breaking barriers.

Here is a look at the members of America's new "first family."

Jill Biden, an educator, is set to transform her new role before she even moves into the White House.

While first ladies traditionally only fulfil ceremonial duties, "Dr B," as her students call her, intends to keep her full-time job as an English professor.

As first lady, Jill is expected to work on education issues and relaunch Joining Forces, a mission to rally around military families that she and predecessor Michelle Obama started in 2011.

The Bidens met in 1975, a few years after the Delaware senator had faced the unthinkable -- his young wife and daughter were killed in a car crash.

Biden often says his second wife "put us back together."

The couple wed in 1977, and she became "Mom" to his sons Hunter and Beau, who survived the car accident. They also have a daughter, Ashley, together.

While raising her family, Jill, 69, also earned two Master's degrees, and would eventually earn a doctorate in education.

She supported her husband through his three previous presidential bids and was one of his most vocal advocates and tireless campaigners during his most recent run. 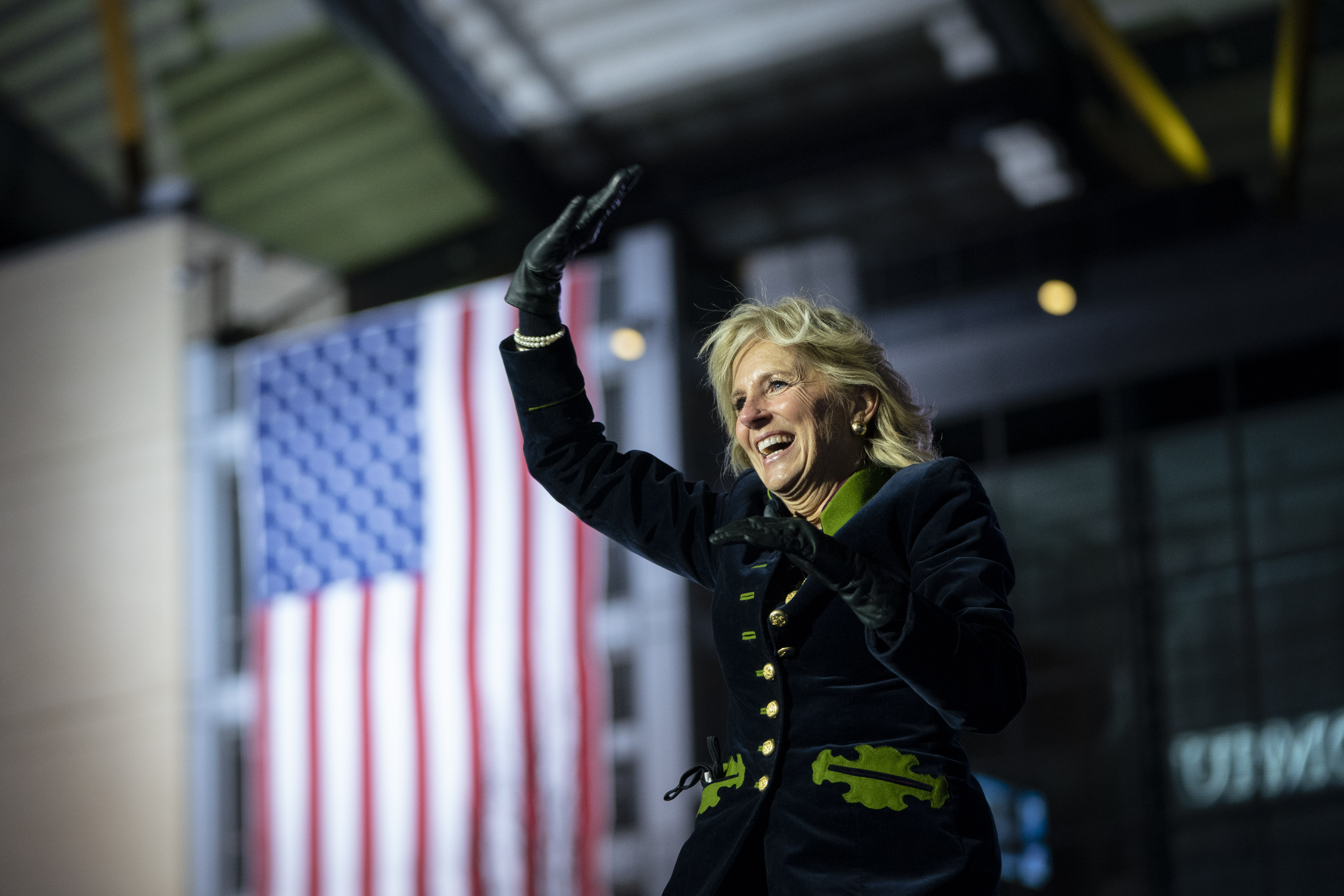 Dr. Jill Biden arrives to speak in support of her husband Democratic presidential nominee Joe Biden during a drive-in campaign rally at Heinz Field on November 02, 2020 in Pittsburgh, Pennsylvania. One day before the election, Biden is campaigning in Pennsylvania, a key battleground state that President Donald Trump won narrowly in 2016. Drew Angerer/Getty Images/AFP

Biden has often spoken about how his relationship with his sons helped him cope with grieving as he built his political career, as well as when he married Jill.

For years, while working as a senator, he commuted by train two hours each way between the family home in Delaware and Washington in order to be there for Hunter and Beau.

Beau was seen as inheriting his father's public service ethos and political skills. He served in the military in Iraq and became Delaware's attorney general.

But Beau died of brain cancer in 2015 at age 46, less than two years after he was diagnosed.

Biden refers to his late son often in political speeches, and he regularly visits Beau's grave, as well as those of his first wife and daughter.

Biden's other son, Hunter, has stayed farther from the spotlight. He struggled with alcohol and drug addiction and was discharged from the Navy Reserve in 2014 after a positive test for cocaine.

He became a regular focus of Donald Trump's attacks ahead of the November 3 vote for his business dealings in Ukraine and China.

Hunter, 50, now an artist based in Los Angeles, has admitted to displaying "poor judgment" in some of his business dealings, but denied any wrongdoing.

Biden, however, has been unwavering in his support for his son. During the final presidential debate, when Trump mocked Hunter's cocaine use, the former vice president simply said: "I'm proud of him. I'm proud of my son."

After Trump was the first president in more than a century not to have a dog, the Bidens are bringing two with them.

The German shepherds -- Champ and Major -- as well as a cat, whose breed and name have not yet been revealed, will move into the White House on January 20.

Champ has been with the Bidens since 2008. The family fostered and then adopted Major in 2018. According to Biden's team, Major will be the first foster dog to live in the White House.

The canine companions featured in one of Biden's campaign ads that warned voters to "choose your humans wisely," highlighting clips of Trump scoffing at the idea of a presidential pet.

The two good boys also starred in the Bidens' holiday message. A video cut between shots of Champ, relaxing by a Christmas tree with a sedate instrumental version of "We Wish You A Merry Christmas" playing in the background, and clips of Major playing and zooming around the house to an electric guitar version of the holiday carol.