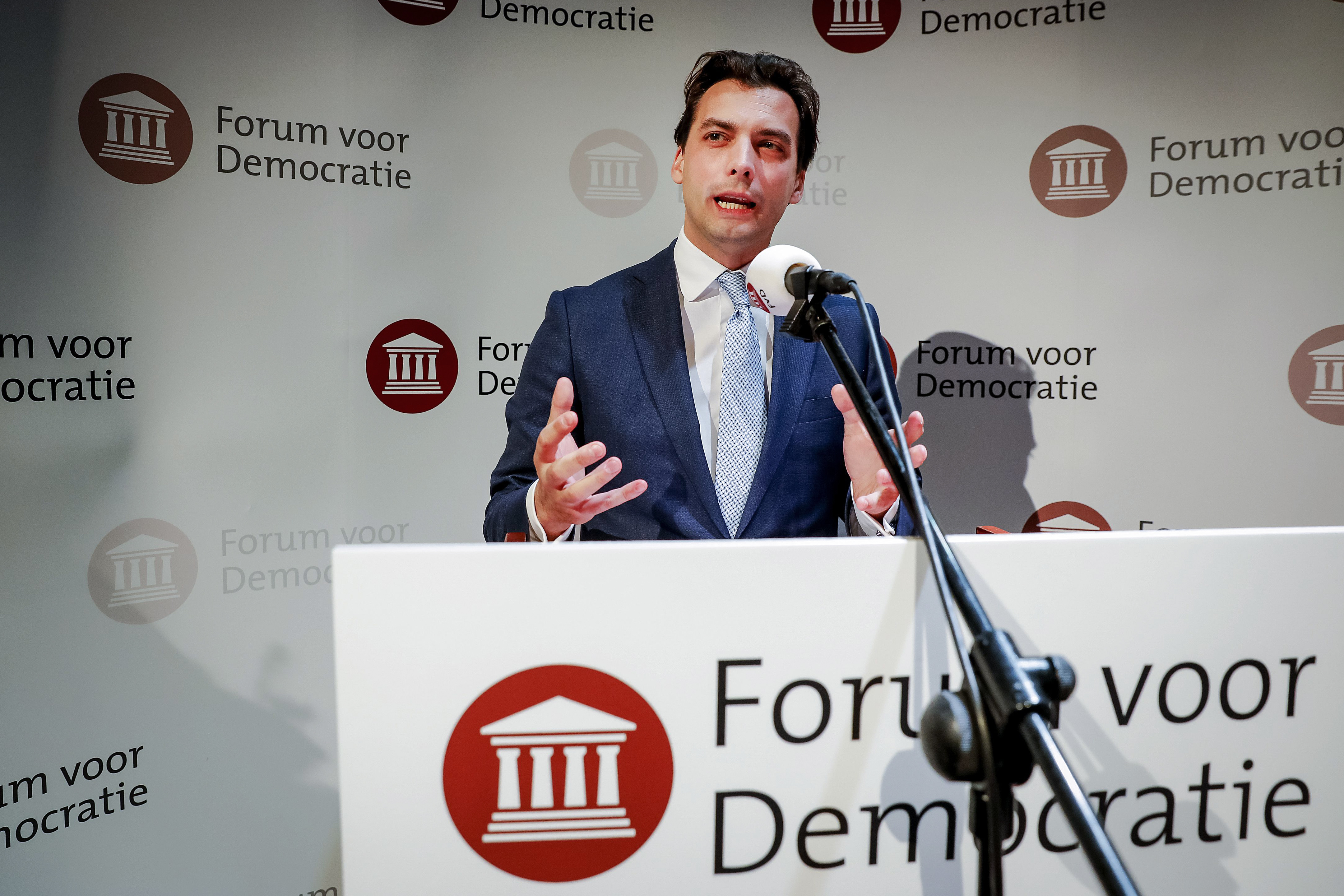 Thierry Baudet from Forum for Democracy (FVD) party gives a speech during the election night of the Provincial Council elections and the water board elections on March 21, 2019 in Zeist.

THE HAGUE, Netherlands - A former academic with a love of classical allusions and naked poolside Instagram photos, Thierry Baudet has stunned the Dutch political world with his victory in provincial elections.

The latest in a line of flamboyant Dutch populists, 36-year-old Baudet and his Forum for Democracy party have been on the scene for less than two years.

He has used good looks and social media to soften the edges of a strong anti-immigration, anti-EU and climate change-sceptic message that echoes other right-wingers across Europe.

But he also has a history of controversial utterances and alliances that have led critics to describe him as the telegenic European face of a Donald Trump-style alt-right politics.

Baudet, who has a law doctorate, typically showed off his learning in his victory speech on Wednesday, declaring that the "owl of Minerva has descended", referring to the Roman god of wisdom.

However his speech notably avoided the directly anti-Islam rhetoric used by his political rival, far-right leader Geert Wilders, who is set to lose seats in the senate after the vote.

Pepijn Bergsen, a manager at the business advisory Flint Global, told AFP that Wilders' "one issue" message was "just not resonating as much as it has".

"Baudet has been very good at widening that into a broader populist and nativist narrative," he said.

With his slicked back hair and gleaming teeth, Baudet burst into the spotlight in 2017 when his Forum for Democracy won two parliamentary seats.

He was known before that for writing several books including one called "Oikophobia: The fear of home", a key theme in populism referring to the restoration of the nation state.

On his Instagram and Twitter accounts, Baudet shows himself engaged in cultural pursuits such as playing the piano in his office or playing chess.

Notoriously, in one picture he also posed naked at the edge of a swimming pool, his right hand covering his modesty, earning himself the moniker of "political dandy".

But his social media presence also reveals a more controversial side.

In one picture he poses with right-wing provocateur Milo Yiannopoulos, who was recently banned from Australia over comments made about the Christchurch mosque massacre.

In others he can be seen with British Brexit supporter Boris Johnson, or with his "mentor" Roger Scruton, a British philosopher with outspoken views on Islam and a supporter of Hungary's populist Prime Minister Viktor Orban.

Baudet has also made controversial comments on issues of gender -- saying that "women in general excel less in jobs and have less ambition" -- and multiculturalism.

His victory speech was characteristic in that he raged against the "rubble of what was once the most beautiful civilisation" and accused Rutte of opening the door to mass immigration.

He has also made headlines for calling for closer relations with Russia.

Despite his rhetoric, Baudet has hit a nerve within Dutch society.

An elderly Dutch woman who asked not to be named said she was swayed after being robbed in her driveway five years ago by a man of Moroccan origin.

"I don’t have anything against Muslims, just about how they were integrated into our society. In fact, I am voting for Baudet because he is less aggressive against Muslim people than Wilders," said the woman, who lives Utrecht, the scene of a suspected terror attack on Monday.

Bert Wagendorp, a columnist for De Volkskrant newspaper, placed Baudet firmly in a political tradition started by Pim Fortuyn, who was assassinated 17 years ago.

"Baudet is the third stage of the Dutch populist rocket launched by Pim Fortuyn in 2002, further boosted by Geert Wilders and now being sent to the moon by Baudet," he wrote.

With Europe's eyes on the latest populist to emerge from the Netherlands, Bergsen pointed out that it was far from the first country to move to the right.

"It's not just the Netherlands. It's just that the Netherlands has one of the most proportionate systems in the world that means these parties are able to get in with a limited amount of votes," he said.