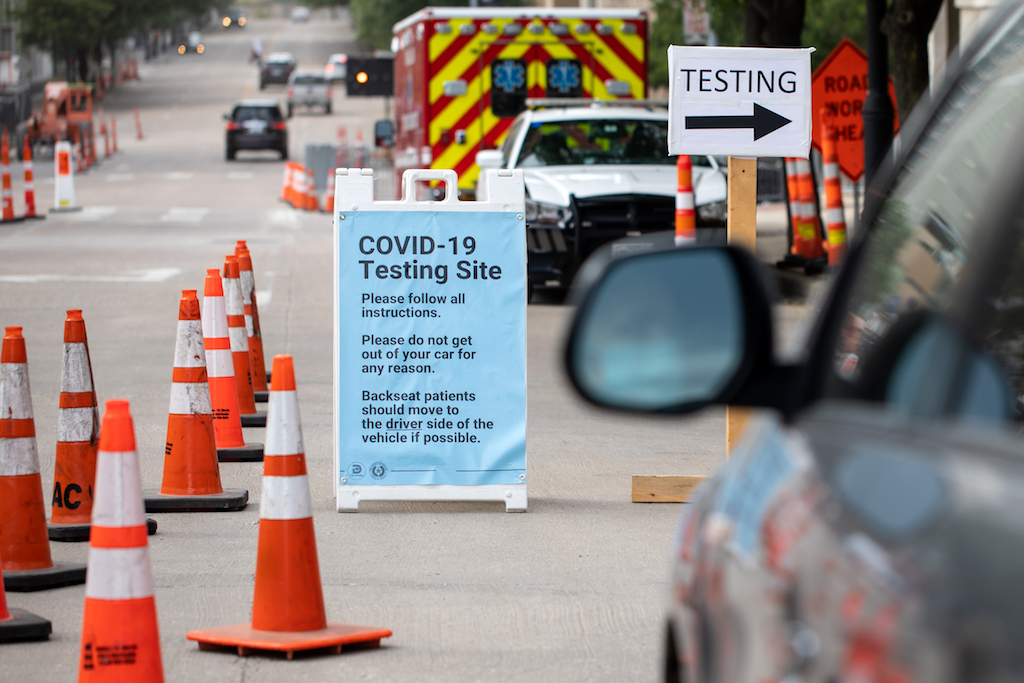 Cars wait in line at a drive-up COVID-19 testing site inside the American Airlines Center parking garage in Dallas on June 27, 2020.

STOCKHOLM - More than six in 10 countries around the world have adopted measures during the Covid-19 pandemic that threaten democracy or human rights, a report by democracy institute International IDEA said Wednesday.

The study, which examined the situation in almost all countries of the world, concluded that 61 percent of nations "implemented restrictions that were either illegal, disproportionate, indefinite or unnecessary" in at least one area of democratic freedoms.

Among countries widely considered democracies, 43 percent fell into this category, a figure that rose to 90 percent for authoritarian regimes, according to the Stockholm-based intergovernmental organisation.

"It was to be expected that authoritarian regimes that had fewer checks and balances would use the excuse provided by the pandemic to tighten their grip," secretary-general Kevin Casas-Zamora told AFP.

READ: Record hunger in the Philippines as COVID-19 restrictions bite

"What is more surprising is that so many democracies have adopted measures that are problematic from the standpoint of democracy and human rights."

India, a democratic country, held the unenviable top spot, with measures of "concern" in nine of 22 areas studied -- including freedom of movement, freedom of expression and freedom of the press -- ahead of Algeria and Bangladesh with eight areas of concern.

They were followed by China, Egypt, Malaysia and Cuba, which each had seven.

Russia was the top European nation with six, a score shared by Saudi Arabia, Myanmar, Jordan, Sri Lanka and Zimbabwe.

IDEA examined the various measures adopted around the world to determine if they were problematic from a democracy and human rights standpoint, regardless of effectiveness from a health perspective.

Along with India, Malaysia, Myanmar, Sri Lanka and Iraq -- all considered democracies, albeit some of them "fragile" -- were among the top 15 countries with the worst records.

"The pandemic is an accelerator of trends that were in place before the virus struck," Casas-Zamora said.

Five European Union countries were mentioned: Bulgaria with three areas of concern, Hungary (two) and Poland, Slovakia and Slovenia (one each).

Among the major Western democracies, only the United States was singled out, with two areas of concern: "freedom of association and assembly", and "predictable enforcement".

Israel had five areas of concern and Argentina two.

COVID-19 in SA: A critical assessment of the first 90 days

Among the most frequent concerns were restrictions on press freedoms in the name of fighting disinformation, excessive use of force such as deploying troops to enforce rules or internment camps for the sick, corruption in emergency supplier contracts, and blaming migrants for the pandemic.

The study also praised several countries as role models for having combined effective health measures with a respect for democratic principles.

France, Italy, Canada, Germany, Britain and Spain were not mentioned among the top performers but did not present any concerns either.

IDEA refuted the idea that undemocratic nations had done better at containing the new coronavirus.

Havana's and Beijing's apparent success in fighting the virus "has been achieved at a high democracy and human rights cost," the report noted.

IDEA said its conclusions were based on global observations of the impact of Covid-19 on democracy, launched in July with the European Commission.

According to the institute, 55 percent of the world's population currently live in a democracy. In the 162 countries assessed, it counted 99 democracies, 33 authoritarian governments and 30 "hybrid" governments.