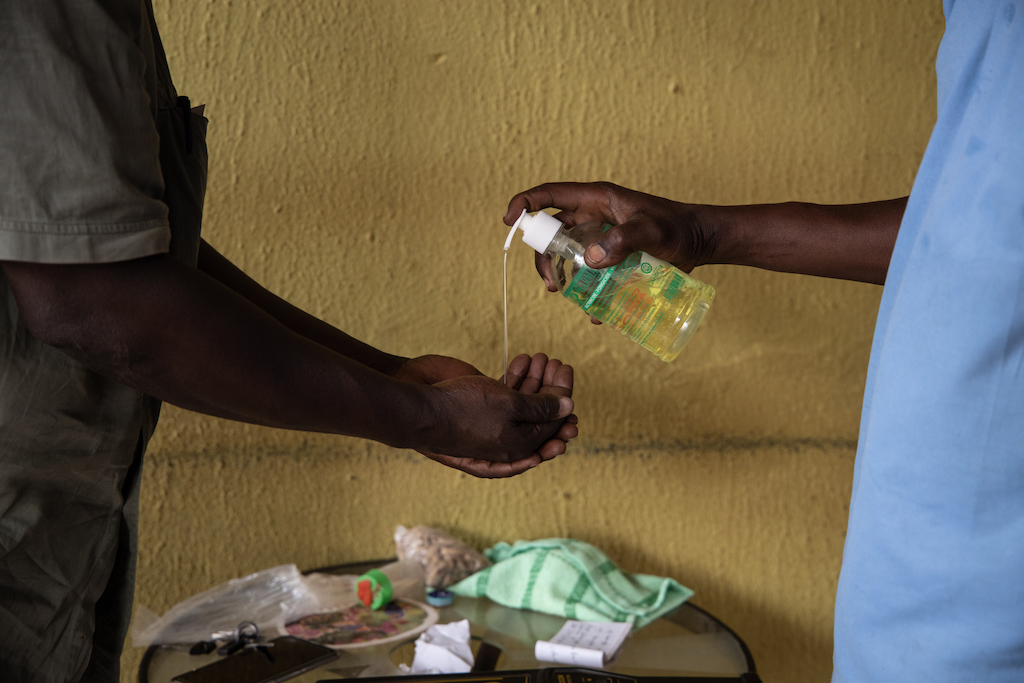 A security guard at the entrance of a supermarket distributes hydro-alcoholic gel to customers as a preventive measure against the spread of the new COVID-19 coronavirus.

As travellers cancel flights, businesses ask workers to stay home, and stocks fall, a global health crisis becomes a global economic crisis. In any health crisis, our first concern is (and should be) with the health of those affected. More than 6,400 people have died worldwide and more than 164,000 cases have been confirmed in 146 countries or territories.

The economic impacts have dramatic effects on the well-being of families and communities. For vulnerable families, lost income due to an outbreak can translate to spikes in poverty, missed meals for children, and reduced access to healthcare far beyond COVID-19. With cases confirmed in many low- and middle-income countries, these impacts may affect the world’s most vulnerable populations.

What are the channels of economic impact we can expect from COVID-19? Beyond the human tragedy, there is a direct economic impact from lives lost in an outbreak. Families and loved ones lose that income and their in-kind contributions to household income such as childcare.

Though less likely to pass away from COVID-19, many working-age adults still fall ill and their families will feel the financial burden as they miss work for days or weeks.

These actions affect all sectors of the economy. These in turn translate into reduced income both through the supply side (reduced production drives up prices for consumers) and the demand side (reduced demand from consumers hurts business owners and their employees).

These short-term economic impacts can translate into reductions in long-term growth. As the health sector soaks up more resources and as people reduce social activities, countries invest less in physical infrastructure. As schools close, students lose opportunities to learn (hopefully only briefly) but more vulnerable students may not return to the education system, translating to lower long-term earning trajectories for them and their families, and reduced overall human capital for their economies.

For example, unplanned pregnancies rose sharply in Sierra Leone during the Ebola epidemic, likely in part a result of school closures. Adolescent mothers are less likely to return to school, and their children will likely have fewer health and educational investments.

Further, the infection and death of health workers in the front lines of epidemics can lead to worsening health conditions in the long-term, such as maternal and infant mortality. These all have poverty implications well beyond their humanitarian implications.

What we know so far and what to expect

Economic estimates of the likely global impact vary dramatically. Tom Orlik and others at Bloomberg hypothesise $2.7 trillion in lost output. The Asian Development Bank projects losses ranging from $77-billion to $347-billion, and an OECD report talks about a halving of global economic growth.

Some recent analysis of the actual and potential economic impacts of the crisis provides a snapshot. Across sectors in African countries, the economic impact stems from the slowing down of the Chinese economy, with reduced Chinese demand for raw materials. This analysis projects reduced investments in energy, mining, and other sectors, and a fall in travel and tourism.

Another analysis reports that Chinese factory closings have adversely affected consumers in Africa. In Zimbabwe and Angola, exports to China have crashed.

About a fourth of Ugandan imports come from China. Supply chains have been interrupted for weeks because many Chinese factories shut down production. Small traders selling textiles, electronics or household goods are in trouble … In Niger, stocks of certain goods, including groceries, from China have already been significantly decimated, leading to higher prices.

Most of the data and observed impacts in the developing world so far stem from production and export stoppages from China, and those estimates pre-date the worsening economic conditions in Europe and the US. But as the economies of other countries slow down with the spread of the disease, these impacts will show up more clearly in economic data and likely grow over time.

What should be done

First, contain the pandemic. As our colleague Jeremy Konyndyk puts it,

To assuage market reactions to the outbreak, you have to present a viable plan to defeat the outbreak.

As long as the outbreak is actively spreading, many aversion behaviours are rational and wise. Containing the disease is the first step to mitigating not only the health impacts but also the economic impacts.

Making sure there is an economic safety net in place – cash transfers, sick leave, subsidised health coverage – helps the most vulnerable survive and provides support to enterprises that serve those populations.

Third, measure the impact. Systematic data on which populations are experiencing the greatest hardships and which industries are failing is essential to providing assistance. During the Ebola epidemic of 2014-2015, researchers used phone surveys in Sierra Leone and Liberia – building on the sample frames from existing surveys – to gather information on the impacts of both ill health and aversion behaviour on households and enterprises across the countries.

Amina Mendez Acosta provided research assistance for this article. A version of this article was first published by the Center for Global Development.