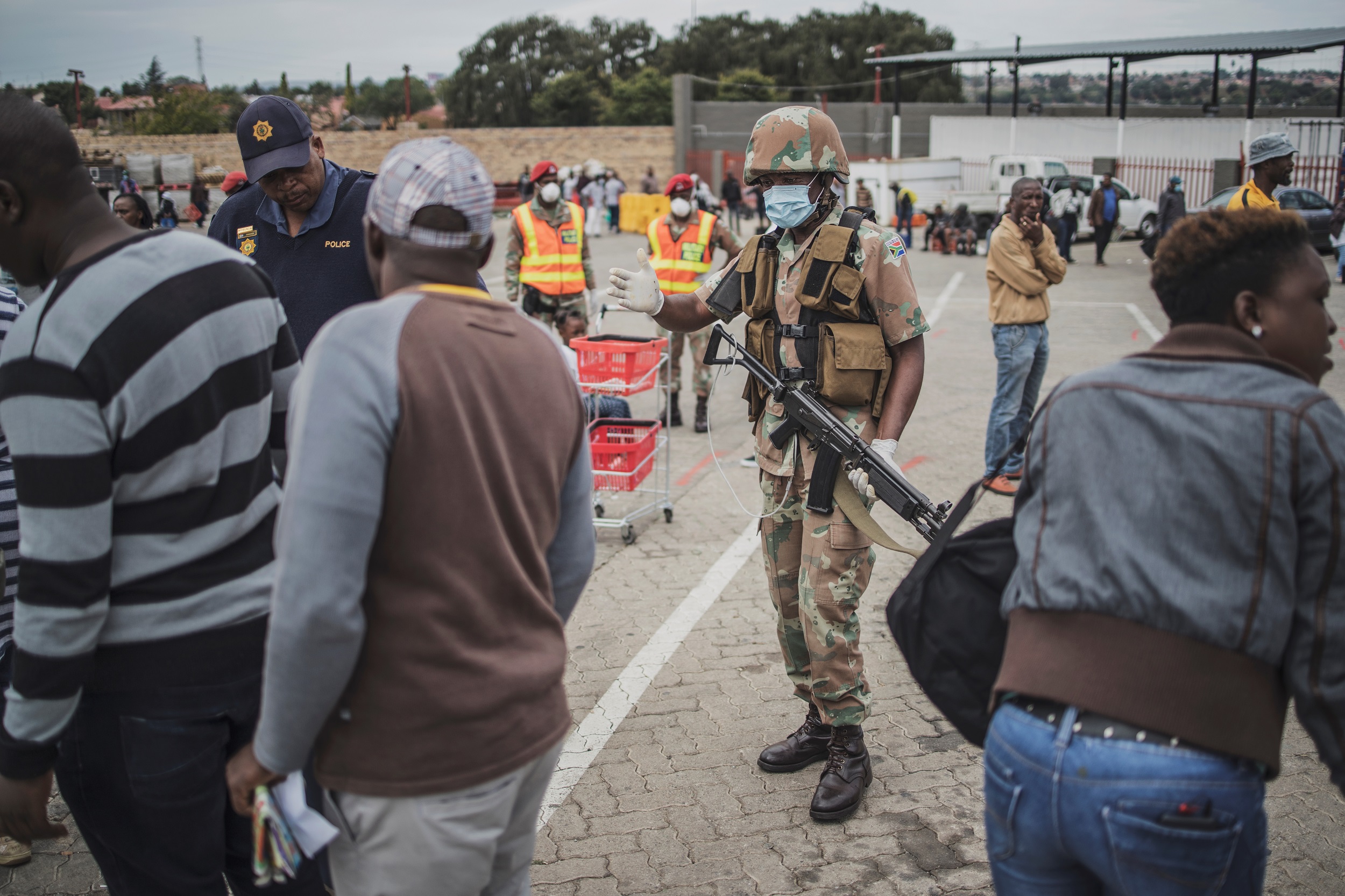 A soldier gestures towards a line of shoppers at a supermarket in Soweto.

SOWETO - Along Vilakazi, one of South Africa's most famous streets where Nelson Mandela and Desmond Tutu once lived, restauranteur Manqoba Mbutho, worries that the coronavirus lockdown will lead to a spike in crime and wreak havoc on business.

A cup of coffee in hand, Mbutho stares across into the eerily empty street in Soweto, the country's best known township, which is usually abuzz with tourists, guides and vendors.

Only neatly arranged tables and chairs can be seen through the transparent plastic shutters of his restaurant.

The lockdown is "affecting us in a bad way. It's 16 more days to go and it can be extended from the look of things," he said, complaining about the complacency being displayed by some South Africans.

"Some people are ignorant, they don't believe there is this kind of disease".

While many like Mbutho are complying with a 21-day lockdown imposed by government to curb the spread of the virus -- others went about business as usual in Soweto - the crucible of the anti-apartheid struggle and a stronghold of the ruling African National Congress (ANC) party.

At the nearby Jabulani Mall, hundreds of people lined up in winding queues to either withdraw government social grants or to shop for supplies.

There were no marshals nor control over the number of people entering the mall.

"We have heard our government speak but we tend to ignore not because we don't know what to do, we are just being stubborn," said Sihle Hlomuka.

He, however, blamed the government for not doing enough to enforce the lockdown.

READ: Five in quarantine after contact with Alex coronavirus patient

But many are against the use of force in a country which has Africa's highest number of confirmed coronavirus cases but also one of the continent's highest crime rates.

"Beating up people is an extreme measure but I guess there can be more visibility from the police in our streets because there are many people roaming around all the time," said Khanyi Khumalo, 30, a HIV counsellor, waiting to but vitamins for her five-year-old son.

"We didn't get the free days just to stay home and do whatever that you want to do ... it is not a holiday. We need to really adhere," said Msomi at the packed Jabulani Mall.

"People ... don't think it will happen to them, they think it only affects people with money."

For now Mbutho's worry is not only loss of business, but also a spike in crime.

"Crime is going to go up, it's going to shoot through the roof" because people are idle, will earn less or have no salaries, he said.

"Things are going to get tough," he warned.

"There are lots of young guys roaming around the malls, they see us old people, pretend to offer us help with pushing trolleys and then run away with our groceries. We are now more vulnerable than in normal times".