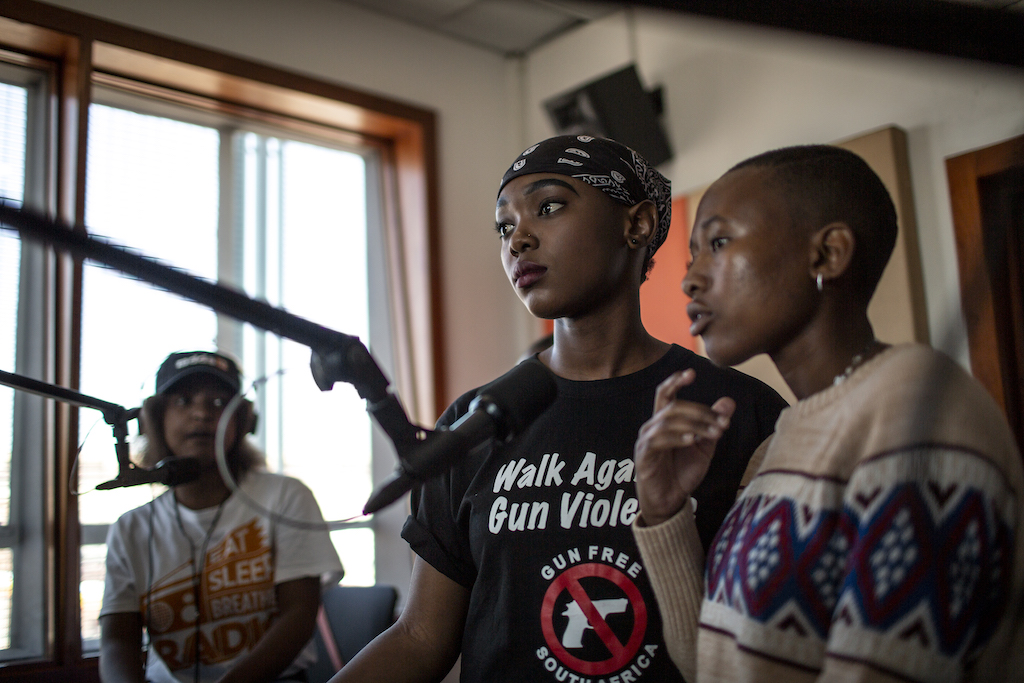 Jennifer Ngobeni (16), Sithembile Daza (18) and Michelle Selemela (17), members of "Bigger than Life" the Children's Radio Foundation team based in Alexandra, take a selfie in a studio during a live broadcast.

JOHANNESBURG - Every week a group of bubbly South African teens crowd into a studio to play hip-hop music and trade views on the scourge of neighbourhood gun crime for their community radio show.

For them, these are not remote topics. The stories they discuss are devastatingly close to home for the young broadcasters -- one reporter's father was shot dead on her birthday, while another is the daughter of a reformed gun-wielding criminal.

The 20-odd teenagers who host Alex FM's weekly "Bigger Than Life" radio show are determined to help stem the violence that touches so many lives in their densely populated and crime-ridden Johannesburg township of Alexandra.

"I can assure you that every single child of Alexandra can be a living testament... every night, from Friday to Sunday, or even sometimes on weekdays, we always hear gunshots -- it is like an always thing," 16-year-old radio host Jennifer Ngobeni told AFP.

Nicknamed "Gomorrah" after the sinful biblical city, Alexandra was home to Nelson Mandela in the early 1940s as he started off on his anti-apartheid campaign.

Today, it is a poverty-stricken area of about 300,000 people beset by gang violence, joblessness and a lack of basic health and education services, with open sewers and waste dumps defiling its streets.

Every Saturday morning, the Bigger than Life crew discuss gun laws, flesh out their personal views and play interviews and music before opening the phone lines for callers from among the station's 150,000 listeners.

One co-host, 11th-grader Michelle Selemela, says her father, who has turned away from crime and violence since getting out of jail, encouraged her to get involved in radio.

"The only thing I could see when I was young was policemen looking for him," the 17-year-old told AFP as she bobbed and weaved through the local market gathering interviews.

"Every time we speak about gun violence it becomes emotional in the studio," said technical trainer Sammy Ramodike, from the Children's Radio Foundation (CRF).

"We have one young reporter by the name of Monica, her father was shot dead in gun violence and unfortunately it was her birthday when her father got shot."

Alexandra is just five kilometres (three miles) from Sandton, the city's affluent business district of skyscrapers and luxury houses -- but poverty and danger are ever-present.

"We live in the perfect conditions to commit and conceal crimes," an infuriated resident said, pointing towards the dark alleyways between dwellings.

Countrywide crime statistics show murders have been on the rise since 2012, with a daily death toll of nearly 57 last year.

About a third of those murdered are killed by guns, according to GunFree SA, which supports the Alex FM radio show along with the CRF.

"A lot of people in South Africa say they want guns around for their own protection," said GunFree SA broadcast trainer Mary-Ann Nobele.

But she warned that data showed gun owners were four times more likely to be injured by their own weapon than to actually use it for self protection.

The 20-year-old, an Alexandra resident herself, helps the teenagers with radio content.

"The youth are affected by gun violence, one way or another," she said.

"Having young people take over this medium lets our issues and our stories be heard. It lets other young people know that they are not the only ones going through it."

The youth radio volunteers tell of a culture of fear that permeates the township and silences residents, fuelling the violence as victims are reluctant to go to police.

She said the sense of insecurity seeps into every home.

"You can never enjoy the joys of being home alone," she said.

"You really have to lock your doors because someone might run into your house...They'll just open the door and run in."

But she is hopeful that the radio show is having an effect. "Us talking about gun violence actually makes people realise that it is not ok for someone to be killed."