Think before you share: old videos going viral in SA 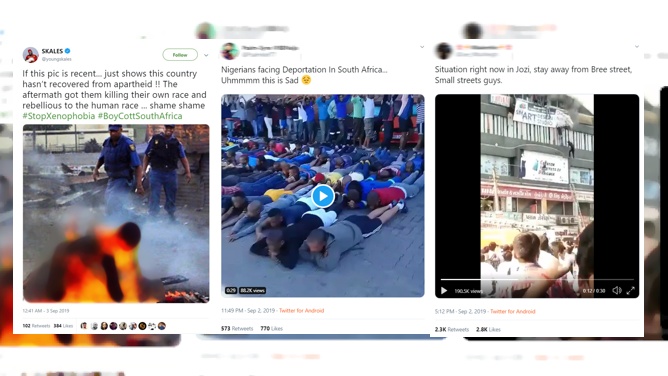 Examples of old videos and pictures being linked to recent xenophobic violence in South Africa.

By Cayley Clifford from Africa Check

Xenophobic unrest has flared up again in South Africa’s Gauteng province. Violent attacks against foreign-owned businesses and incidents of looting have been reported in the cities of Johannesburgand Pretoria.

While videos and images help to better inform the public about the issue, when used in the wrong context they can inflame tensions and cause harmful consequences in the real world.

Several readers asked Africa Check if a number of graphic videos and images being shared online were accurate.

A closer look reveals that, while real, they are unrelated to the recent outbreak and have therefore been used out of context. (Note: Some of the videos are graphic and viewer discretion is advised.)

Video of burning building from India 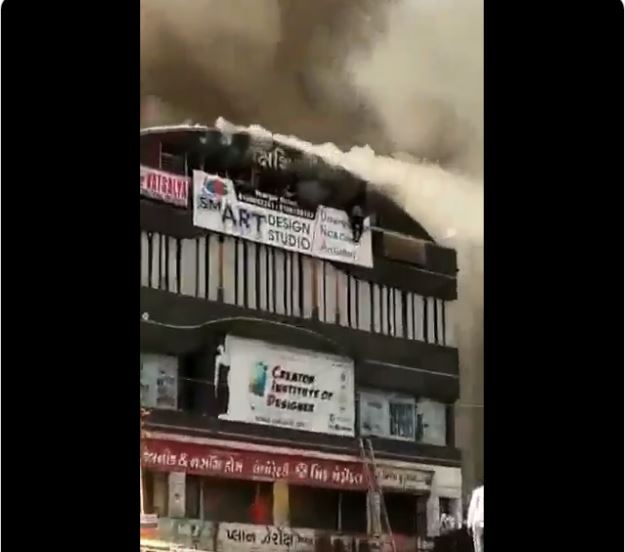 This video is from Gujarat, India.

One video, posted on Twitter, supposedly depicts the situation in Johannesburg’s city centre. It had been viewed over 189,000 times.

The video shows a burning building and people trying to escape by jumping or climbing down the side. A large crowd is gathered behind two firetrucks on the street below.

There are some visual clues which suggest the video may not be from Johannesburg. For example, some of the signage on the building is not written in any of South Africa’s eleven official languages. And members of the crowd appear to be mainly of Asian nationality.

To be sure, we captured a screenshot from the video and searched Google for the image.

The results took us to Youtube where the same video was posted in May 2019. Included in the title are the words “Gujarat fire accident students”.

A quick Google search for these terms returned an India Today article. The video is from a fire that broke out at a coaching centre in Gujarat, India.

Even without using Google, a cursory look at the replies to the tweet would alert Twitter users to these problems. One Twitter user called the video “fake news” and another tweeted “that’s not South africa. Come on now, Jeez”.

Many users were quick to point out that the video was not taken on Bree street, with some even posting links to the original story by various Indian publications.

TIP: Before sharing a video read the replies or comments to see if there are questions about its authenticity.

Video of men lying on ground is from May 2018 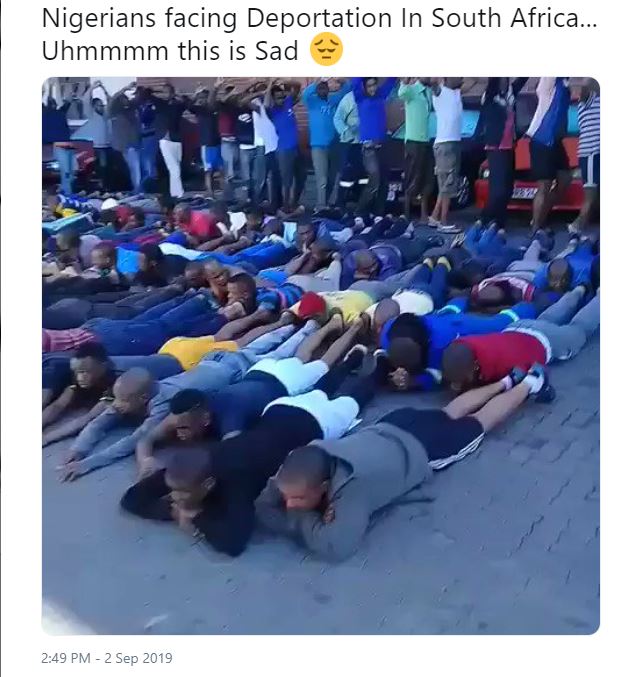 This video was originally shared online in May 2018.

It shows rows of men lying face down on the ground in front of a large building. Behind them, more men can be seen walking in single file with their hands in the air while South African policemen give instructions.

We again captured a screenshot from the video and searched Google for the image.

First in the list of results was a May 2018 article by the Citizen newspaper. Following a cash-in-transit heist in Boksburg, a city in Gauteng’s east rand, police chased down the perpetrators to the George Goch hostel where a search was conducted and four men were arrested.

The Google search also picked up a tweet from May 2018 in which a user posted the same video. The caption, translated from Zulu, reads “it’s bad at the hostels, hands up men”.

We contacted the Gauteng South African Police Serviceto find out more. At the time of publishing, they were yet to respond to our queries. (Note: We will update this report when they do.)

Although the exact details around the incident are unclear, the video was shared online more than a year ago – long before the latest flare up of violence. So it can’t depict the events of the last few days.

Again, a quick look at the comments would have alerted Twitter users to concerns about the origins of the video. “Its not even true. This clip is from a hostel raid some time ago”, one user replied.

“These are South Africans during a hostel raid last year,” said another.

TIP: Do a Google reverse image search of a video screenshot to check if it has been shared before.

Gruesome video is of mob justice in Hillbrow 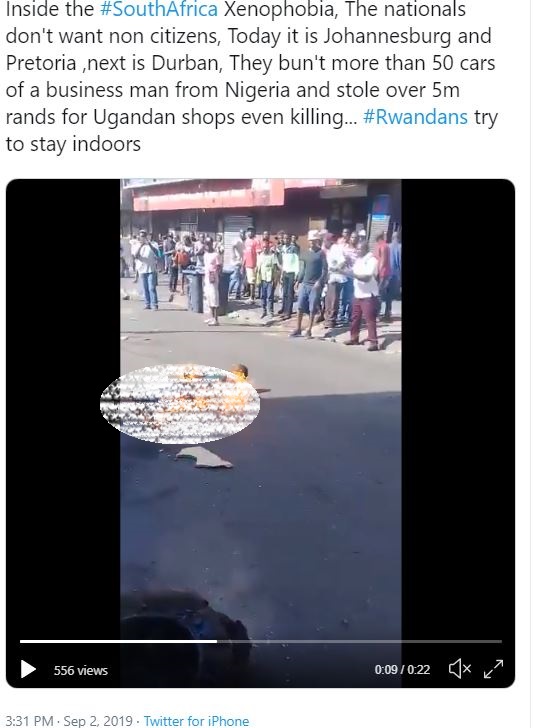 This video was recorded in Hillbrow, South Africa, in January 2019.

A third video, posted to Twitter in September 2019, shows a man on fire. (NOTE: It may be viewed here. Viewer discretion is highly advised.)

A large crowd is gathered around a man on fire, watching as he struggles. As the man stumbles and falls into the road, a cardboard box is placed on top of his body.

The tweet is captioned “Inside the #SouthAfrica Xenophobia, The nationals don’t want [no] citizens, Today it is Johannesburg and Pretoria ,next is Durban”.

Using a screenshot from the video, we searched Google for the image.

Some of the results suggested the video was from an incident of mob justice in Hillbrow, Johannesburg.

A further Google search for the terms “man set alight Hillbrow” picked up a January 2019 article from News24. The incident took place after two men allegedly stole a woman’s handbag. Residents caught the men and took matters into their own hands. Their nationality is unknown.

Showing how widely how such misinformation can reach, the disturbing video was shared by East African celebrity Zari Hassan to her 290,000 followers on Twitter. It is still up on her account.

TIP: Enter a description of the video into Google to pick up news reports similar to the incident. 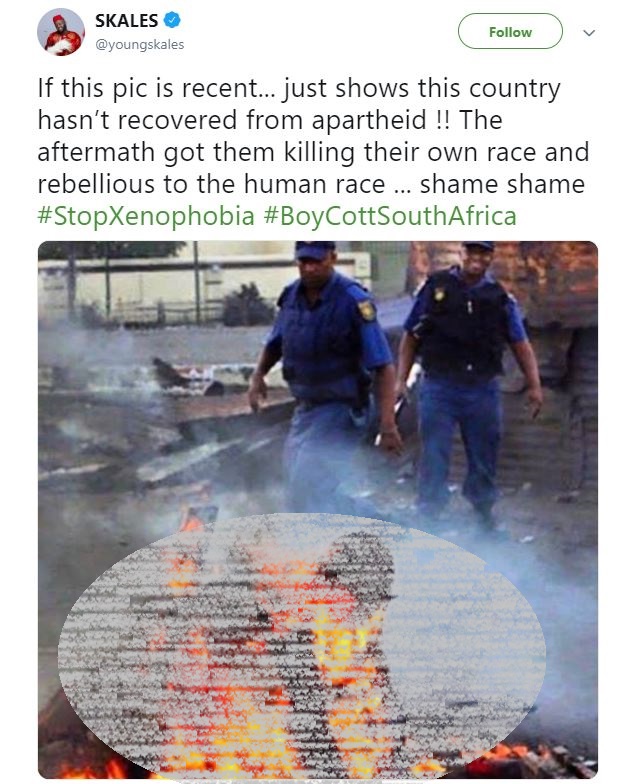 This image is from the outbreak of xenophobic attacks in 2008.

Nigerian rapper Skales (Raoul John Njeng-Njeng) also took to Twitter to express his concern over the latest outbreak of violence. He shared a picture of a man on fire with his 560,000 followers. In the picture the man is kneeling on the ground. Two South African policemen can be seen standing behind him.

“If this pic is recent… just shows this country hasn’t recovered from apartheid !! The aftermath got them killing their own race and rebellious to the human race … shame shame #StopXenophobia #BoyCottSouthAfrica”, the tweet reads.

Africa Check looked into this image when it was shared in 2015, also attributed to xenophobic attacks ongoing at the time.

But the picture is not recent. It was taken during the outbreak of xenophobic attacks in 2008. It shows Ernesto Alfabeto Nhamuave, a Mozambican national, after he was set on fire outside Johannesburg.

No one was charged with his murder and the investigation was officially closed in October 2010.

TIP: Set the record straight if you see someone sharing old or misleading videos. You can post fact-check reports – like this one – or links to the original source of the content.

Conclusion: Share videos and images of xenophobic violence with caution

Many of the graphic videos and pictures being shared online, supposedly showing attacks against foreign nationals in South Africa, are unrelated to the recent outbreak.

While they may have been shared out of concern or to raise awareness, it’s irresponsible to use old pictures and videos to untruthfully represent current events.

Free online tools make it possible to easily verify pictures and videos before sharing. And if you need a hand doing so, ask Africa Check.

* This report was written by Africa Check, a non-partisan fact-checking organisation. View the original piece on their website